One of the most common structures found on any coal-hauling railroad in the eastern part of the United States were facilities for loading coal. These structures ranged from simple ramps were used by trucks used to dump coal directly into hoppers cars to massive preparation plants where coal was sorted, cleaned and ultimately loaded into long strings of hopper cars. From the initial stages of layout design, I had always planned to have a number of coal loading facilities on-line that would be served daily by shifters, turns and roustabouts (as the many locals that served the mines in L&N coal country were named). So let's take a tour of the existing and planned tipples, truck dumps and prep plants on the North Pierce Subdivision of the Chesapeake, Wheeling and Erie.

The first stop is the Allison Coal Company loader located at North Piece, West Virginia. This facility is at the west end of Hollister Yard and is located behind the RIP tracks. The loader is served by trucks which are weighed on the scale before dumping coal into the loading bin. This facility generally loads 3-4 cars per day. 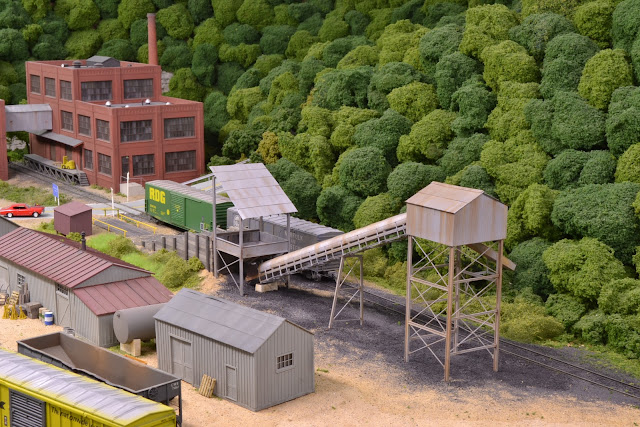 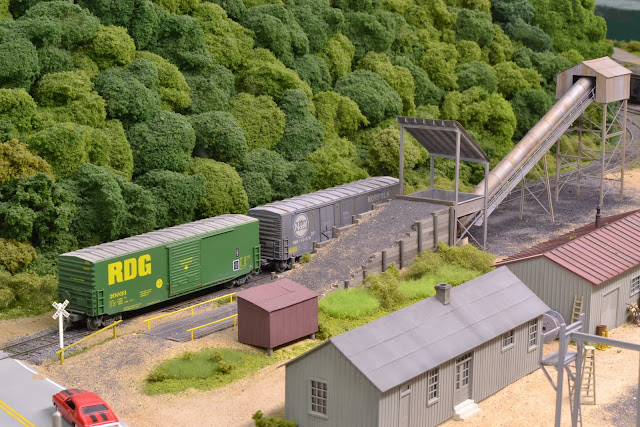 The structure was scratch-built using styrene sheet, strips and various structural forms. The scale platform was made from bass strip wood and the scale house was made from Campbell Scale Models corragated aluminum siding over a wood frame. While this structure isn’t based upon any specific prototype, I used photos of numerous
The next stop is Big Chimney, West Virginia. Here, there are two locations serving the various mines in the area. The first is the Harney Coal loader #2 which is on a short spur that was originally used as a team track. The spur comes off the line from the Purgettsville branch which joins the main just past the station at Big Chimney. This facility generates 3-4 car loads a day. 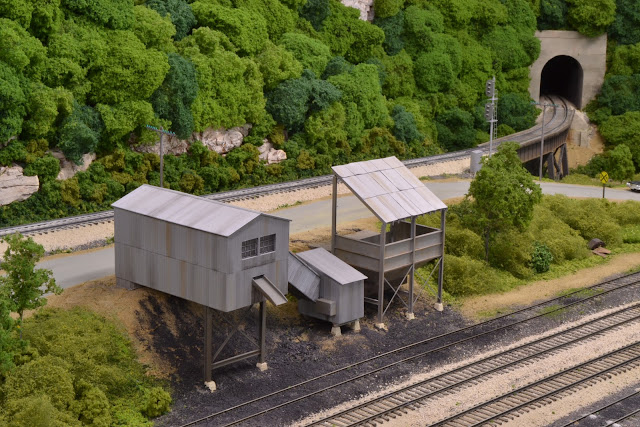 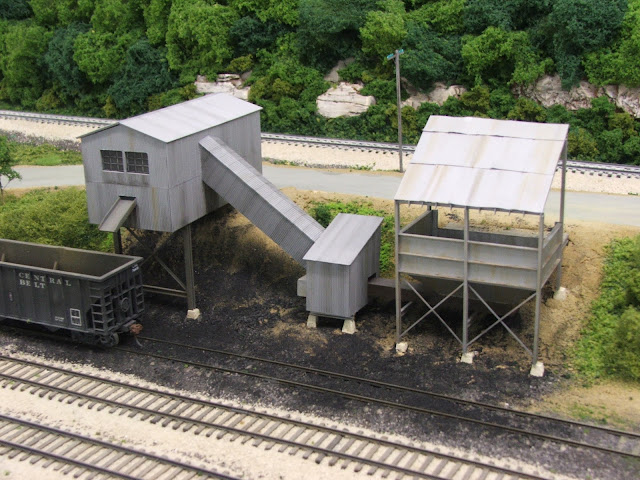 The structure was kit-bashed using parts from the Walthers New River Mine kit along with various structural shapes. The loading bin was scratch-built based upon the Open Fork One tipple on the Clinchfield's Nora Spur and the models of this structure by Don Cassler that appeared years ago in MR and RMC. I drew up scale plans for the bin by estimating the size of the structure in the pictures and then using several dump truck models to make sure the dimensions appeared close.
Across the tracks from Harney Coal #2 is the Mill Creek  #3. This structure will sit at the end of the long spur next to the main line which also serves as the base for helper operations assisting trains up to Summit Springs. The structure will be another truck dump and will be a combination of several small truck dumps on the Clinchfield and the L&N. The facility will load 3-4 cars per day and will be switched, along with Harney Coal #2 and several other industries at Big Chimney, by the Big Chimney Roustabout out of Hollister Yard at North Pierce. 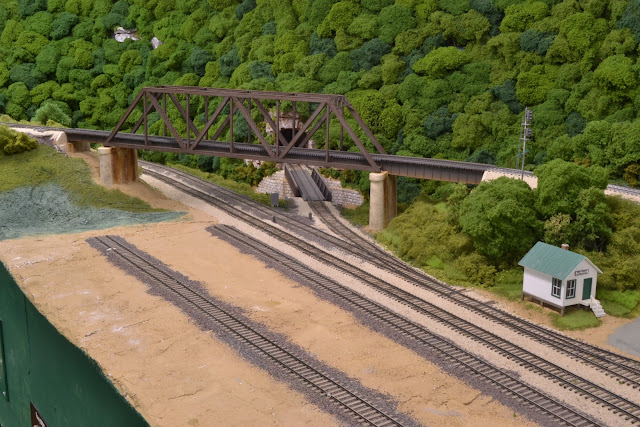 Next, we follow the main line to Cedar Falls Junction where the Sand Fork Branch leaves the main and heads up the “holler” to serve a number of coal loading facilities on the branch. 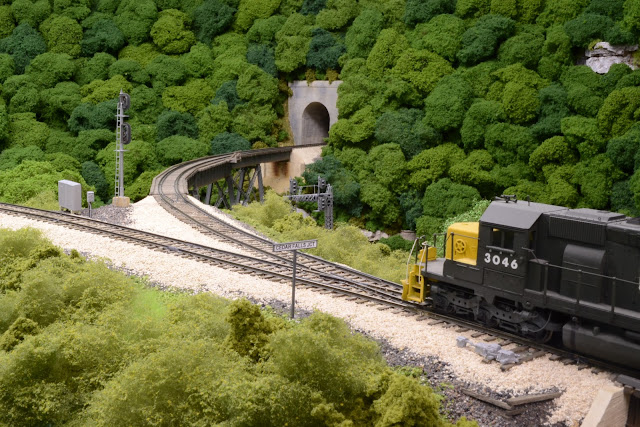 In the picture above, the Sand Fork Branch leaves the main to the left and heads across a long trestle to Dry Fork while the main continues across the trestle to the right as it approaches Summit Springs. At Dry Fork, below, a short spur leads to the two-track Consolidated Coal tipple #4. This facility is also served by trucks and generates 4 cars per day. 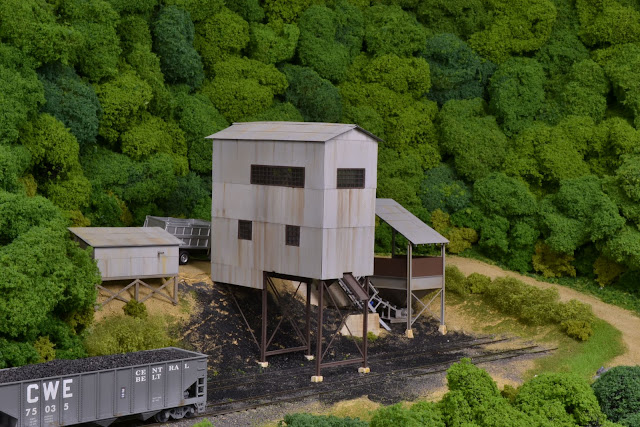 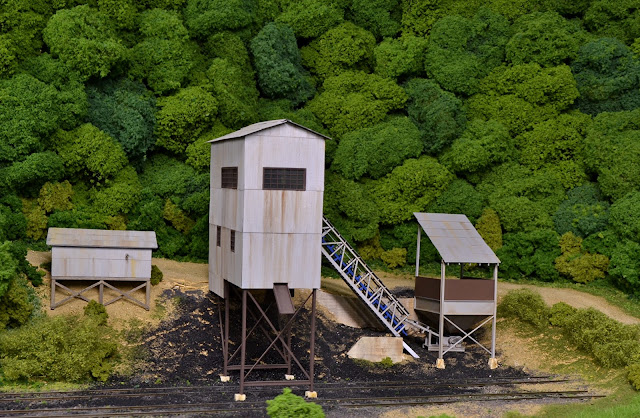 This facility is based upon the Cumberland loader at Trammel on the Clinchfield, and any Clinchfield fan will recognize it instantly. The structure was scratch-build using Evergreen sheet and strip styrene, styrene channel and Campbell Scale Models corragated aluminum siding. The windows were salvaged from a kit (the name and manufacture of which I have long forgotten) and just happened to closely approximate the windows in the Cumberland loader. The conveyor was scratch-build using styrene shapes and strips as was the loading bin. I scaled the buildings in the photos I had by using the distance between the rails and drew up plans. Once I was reasonably satisfied with the dimensions, I made a cardboard mock-up to make sure it would look right and fit the tracks at this location. One lesson learned here- make sure the tracks under the tipple are spaced to accommodate the structure. I laid the tracks first, and realized later that they should have been spaced wider apart in order to accommodate the walkway between to the two tracks. As a result, I had to omit this detail from the model.
That’s it for Part 1. In Part 2, we’ll travel to the end of the Sand Fork branch and then follow the main to Summit Springs to visit some of the mines on the other side of the ridge.

Posted by Tom Patterson at 8:46 AM

Email ThisBlogThis!Share to TwitterShare to FacebookShare to Pinterest
Labels: Structures