Ever since Matt Snell delivered CWE business car no. 1 to the railroad, I've been thinking about how to incorporate it into an op session. It's been tagged onto the back of priority freights for a number of sessions, but that just didn't seem to do the beautiful car justice. Fortunately, I found some inspiration while surfing the internet recently.

The photo below shows Penn Central SPX-2L, an eastbound inspection train, in May of 1975. It consists of an SD45, a PC caboose that appears to be recently painted, and a PC observation car. 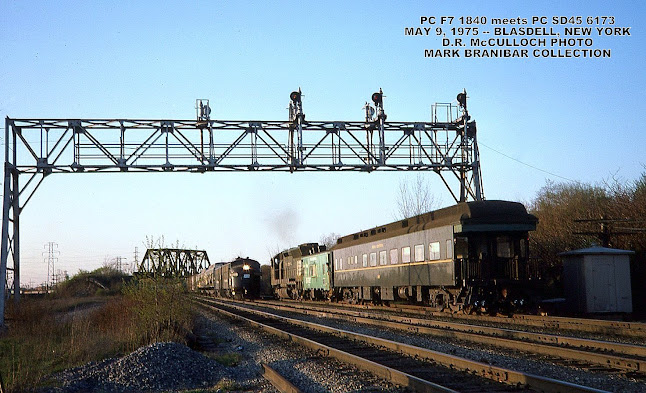 Talk about inspiration- this photo shows exactly the type of movement I wanted to replicate. So I grabbed one of the road's SD45's, one of the newest cabooses, and teamed them up with CWE 1. You can see the results below. 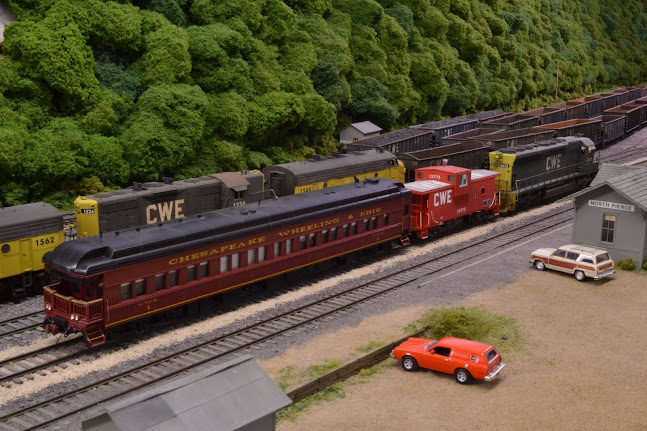 Train cards have been made up for the crews and they can be seen below. 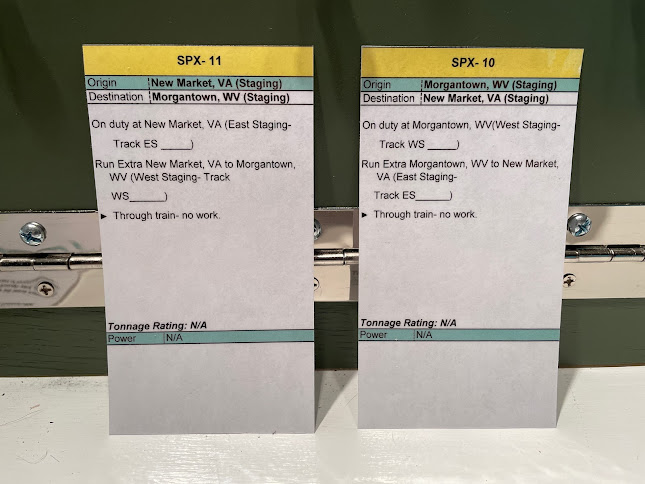 The staging track assignments have been left blank and will be filled in based upon whatever tracks are open during a particular session. A wet erase marker insures that they can be used over and over again.

The photo below shows SPX-10 headed east through Big Chimney. 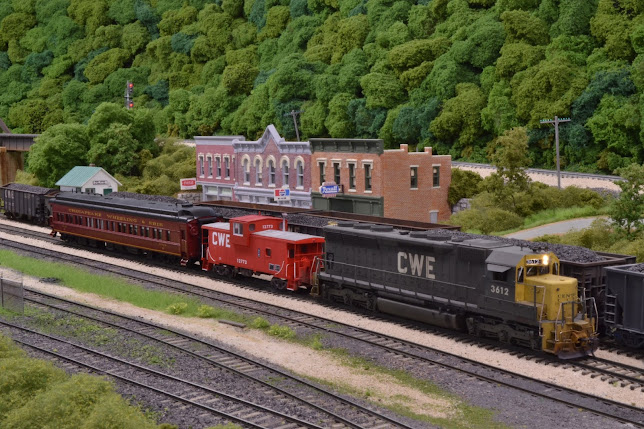 As my good friend Keith VandeStadt suggested, this train will be a show stopper- everything will have to clear up for it. I'd hate to be the dispatcher that put it in the hole for any reason! And I sure wouldn't want to be the employee that calls it the circus train- at least over the radio. Right, Bill Doll?

For whatever reason, maintenance of way equipment has always had a special appeal to just about anyone interested in railroads. For us railroad modelers, MofW equipment gives us the opportunity to build unique models with paint schemes that differ from the rest of the rolling stock on the railroad. And for those of us with operating railroads, the equipment gives us a chance to have special movements periodically.

The plans for a wreck crane on the CWE were hatched almost 40 years ago when I purchased one of the Athearn 200-ton crane kits. I clipped several adds for brass cranes of a more modern design from magazines over the years and saved them in the box with the crane. My plan was to eventually kit-bash a more modern crane from the Athearn kit. However, as the design plans for the railroad were developed and the operating scheme came together, it became apparent that a 200-ton crane would be based at one of the major yards, not on the modeled portion. Would a smaller crane be located at the yard at North Pierce? Perhaps. But the plans for WC 17 didn't fully gel until I found the photo below. 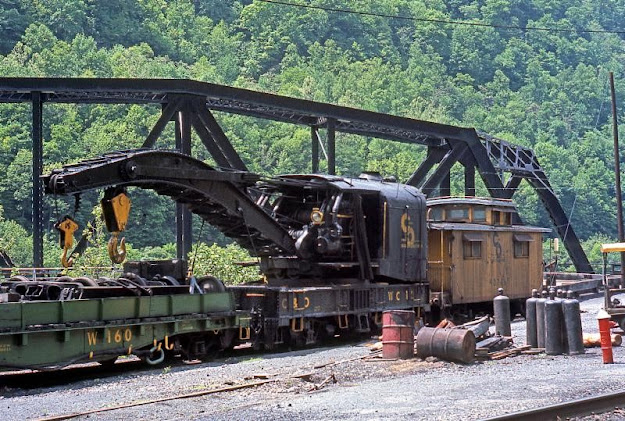 The photo shows one of the C&O's smaller cranes at Thurmond, WV and I'm guessing it's sometime in the 1960's but perhaps a little later. I don't know if it was kept there or not, but one could imagine it was stationed there to handle any minor derailments on the numerous branches that originated here. And it just so happens that Tichy makes a kit of this exact crane. That was all the inspiration I needed!

The photos below shows the completed model on the RIP tracks at North Pierce. 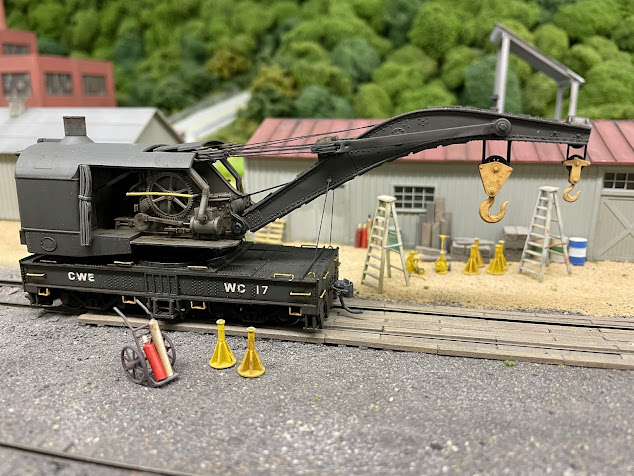 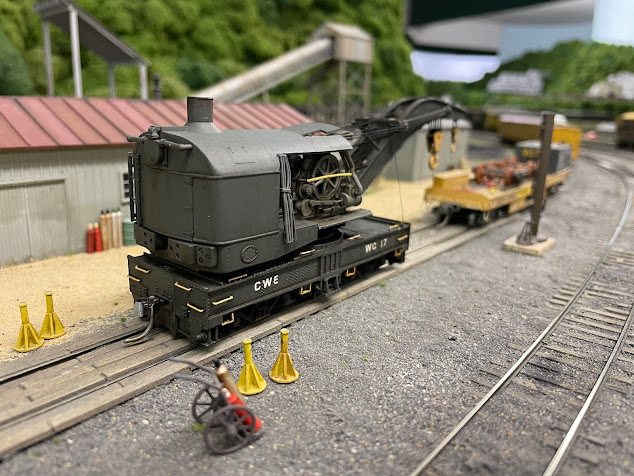 The kit was a joy to build, and I'm really impressed with the design work. All of the pieces fit together beautifully, and it's very apparent that someone spent a lot of time and effort engineering how everything would fit together. The only additional detail that I added was the side curtains. 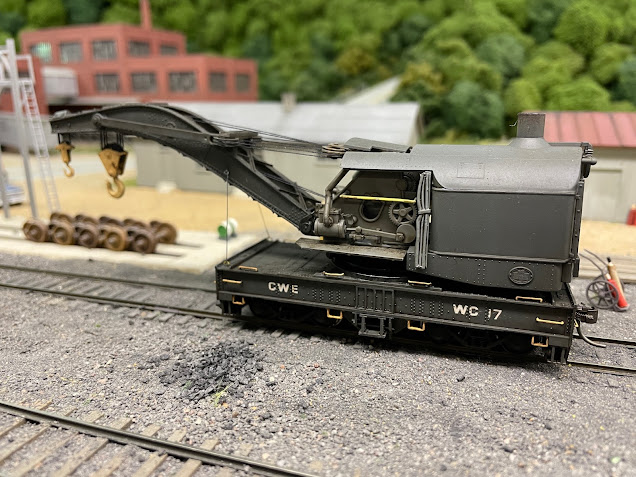 So the boom car that was built back in the mid-1980's finally has a companion. In addition to the recently completed baggage/tool car, there is a tender in the works. There will probably be a passenger car or two that will be added to the wreck train. And I'm not sure if it will be station here at North Pierce or somewhere else on the railroad. Time will tell. But the wreck train will certainly make an occasional appearance during an op session. And yes, it will be limited to 10 MPH.

For those of you who are on Facebook and aren't aware of it, I created a FB page for the railroad back in November of last year. Here's a link to the page: https://www.facebook.com/groups/859085098163401. There have been some interesting and fun posts by some of the members, so check it out if you're so inclined.

And here's what was posted most recently for Front End Friday. 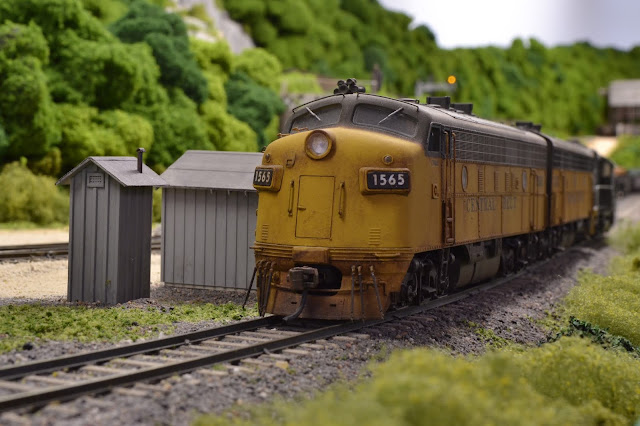 As my good friend Keith VandeStadt likes to say, "drum roll please!" And with that, we'll formally introduce the new blog for the Suffolk Northern Railway. It can be found here: http://www.suffolknorthern.com/. A link is also listed in the Great Railroad Modeling Sites column on the right hand side of the page.

You may recall from previous posts that the Suffolk Northern is a proto-freelanced coal hauler set in the mid-1950's. I've had the pleasure of operating on this railroad for almost 10 years now. Part of what makes it so special is how well it runs and that's thanks to Keith's fastidious attention to making sure everything works just as it should. But it really is the complete package- from paint schemes to weathering to scenery to structures, it's a joy not only to operate but to view as well.

Keith has done a remarkable job with the new blog. It's entertaining, informative, humorous, and just a really fun read. He has gone into great detail about the background and history of just about every aspect of his railroad. I can't imagine there's anything about it that you couldn't find in the wealth of information posted here. So do yourself a favor and check it out. I think you'll enjoy the time spent on the Suffolk Northern.

Posted by Tom Patterson at 7:13 AM No comments: 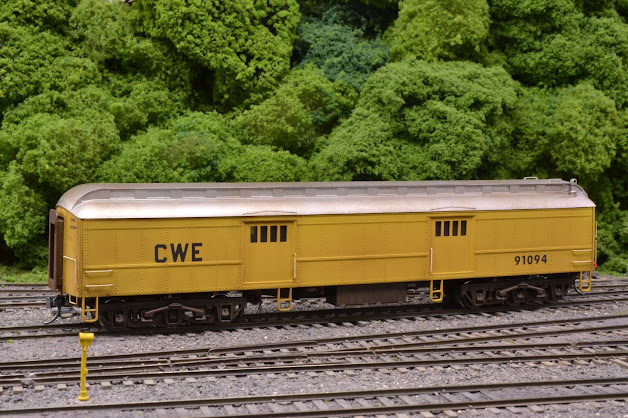 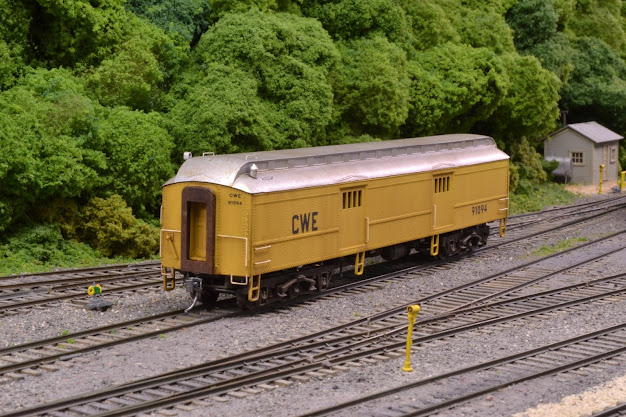 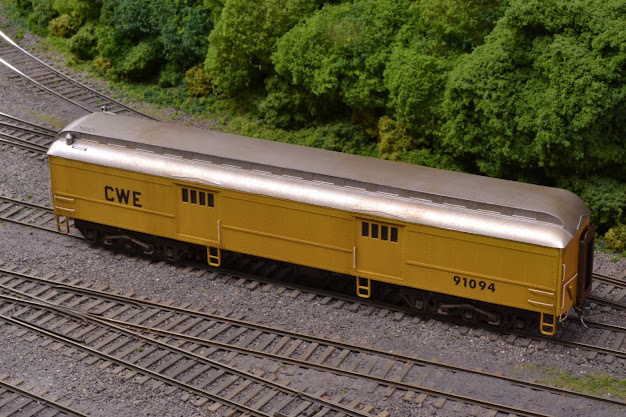 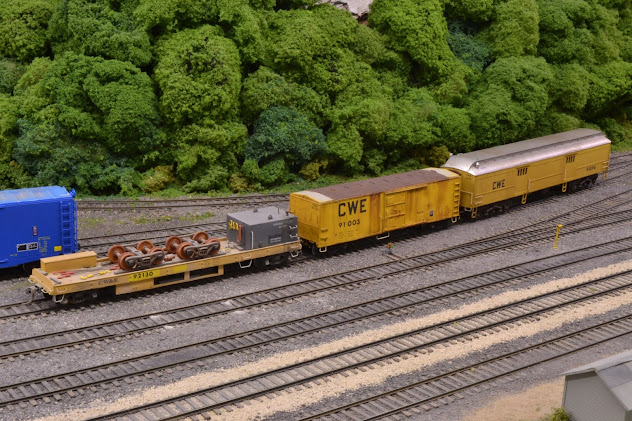 ...strange trip it's been." At least with regard to getting this freight car on the railroad!

It all started back in the fall of 2017 when I purchased an Accurail covered hopper car at the local NMRA show. It was decorated for the PC and I intended to patch it and reletter it for Greg McComas' Michigan Interstate. You can read more about this car on this post: https://cwerailroad.blogspot.com/2019/10/finishing-stuff.html. I finally got the car painted, lettered for the K&LE, and prepped for weathering. And then into the paint shop drawer it went- a year ago last month.

While I am generally pretty good about finishing projects that I have started, there are those occasions when I just lose interest somewhere along the way. Such was the case with this car. It sat waiting to be weathered for over a year. About a week ago, I started perusing covered hopper car photos and sure enough, the inspiration came. I got out the gouache and powders and went at it. The photos below show the results. 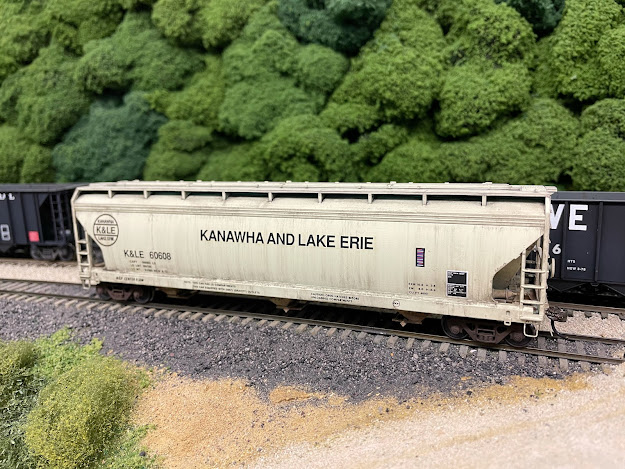 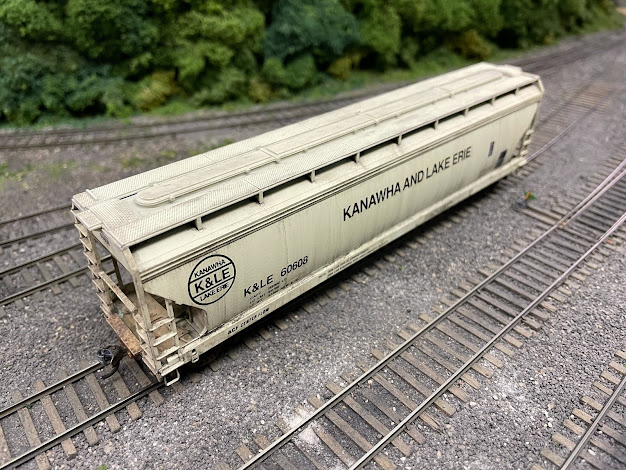 This car was new in 1972 so it was weathered to reflect just four years of service. I mixed up a wash of light grey gouache using Windex and white, ivory black and a little burnt umber. The wash dries fairly quickly but can be manipulated for a long time. I took a rough bristle brush, wetted it with Windex, and then drew it down the sides to get the rain and dirt streaks. The same mix was blotted on the roof with a cosmetic sponge. The trucks received the usual mix of artist's acrylics and powders. While certainly not anything close to an award winner, it will look fine running the railroad in a grainer. And it's great to finally have this one done!

Posted by Tom Patterson at 12:50 PM No comments: 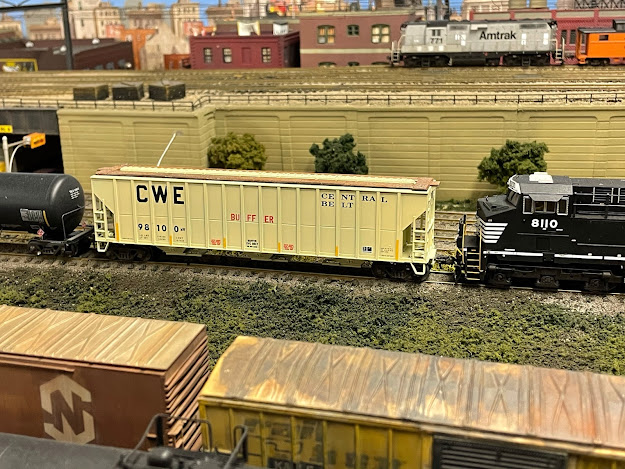 Posted by Tom Patterson at 12:46 PM No comments: