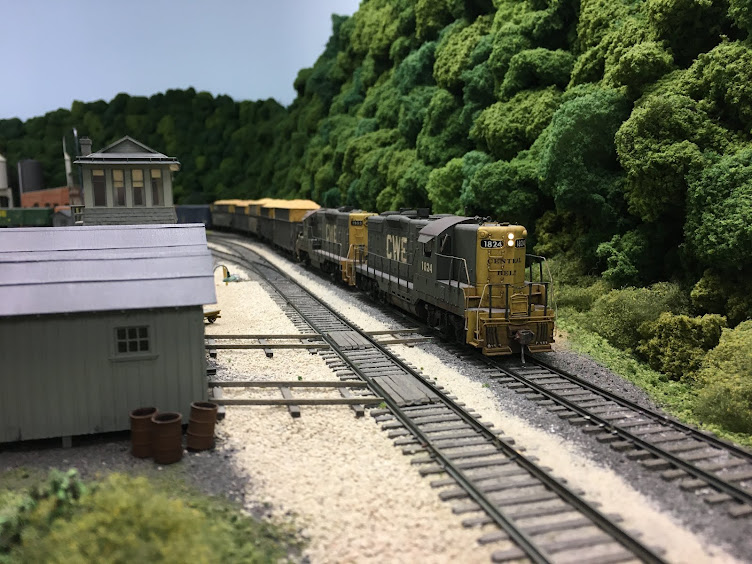 EB-16 passes SJ Cabin as it heads east out of Hollister Yard.

Yesterday, I was sitting at my laptop working on the signaling program and I glanced over at the layout. I was just about at eye level with the track and it struck me that it might make a neat photo. And Randy Seiler recently took a bunch of really great close-up shots on John Miller's Kanawha & Lake Erie which got me thinking about some different angles to shoot on the CWE. So here are a couple of shots from some slightly different angles. 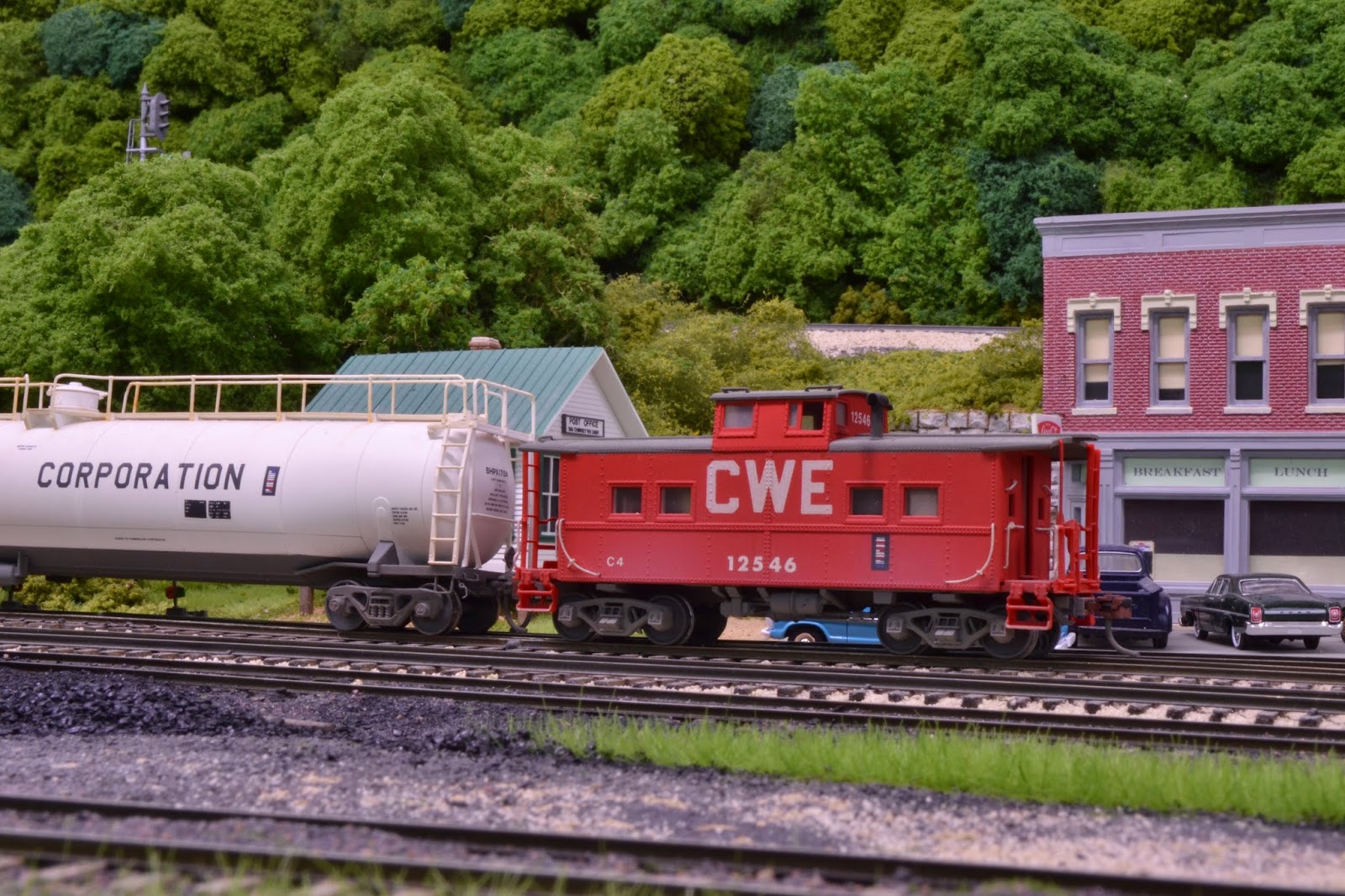 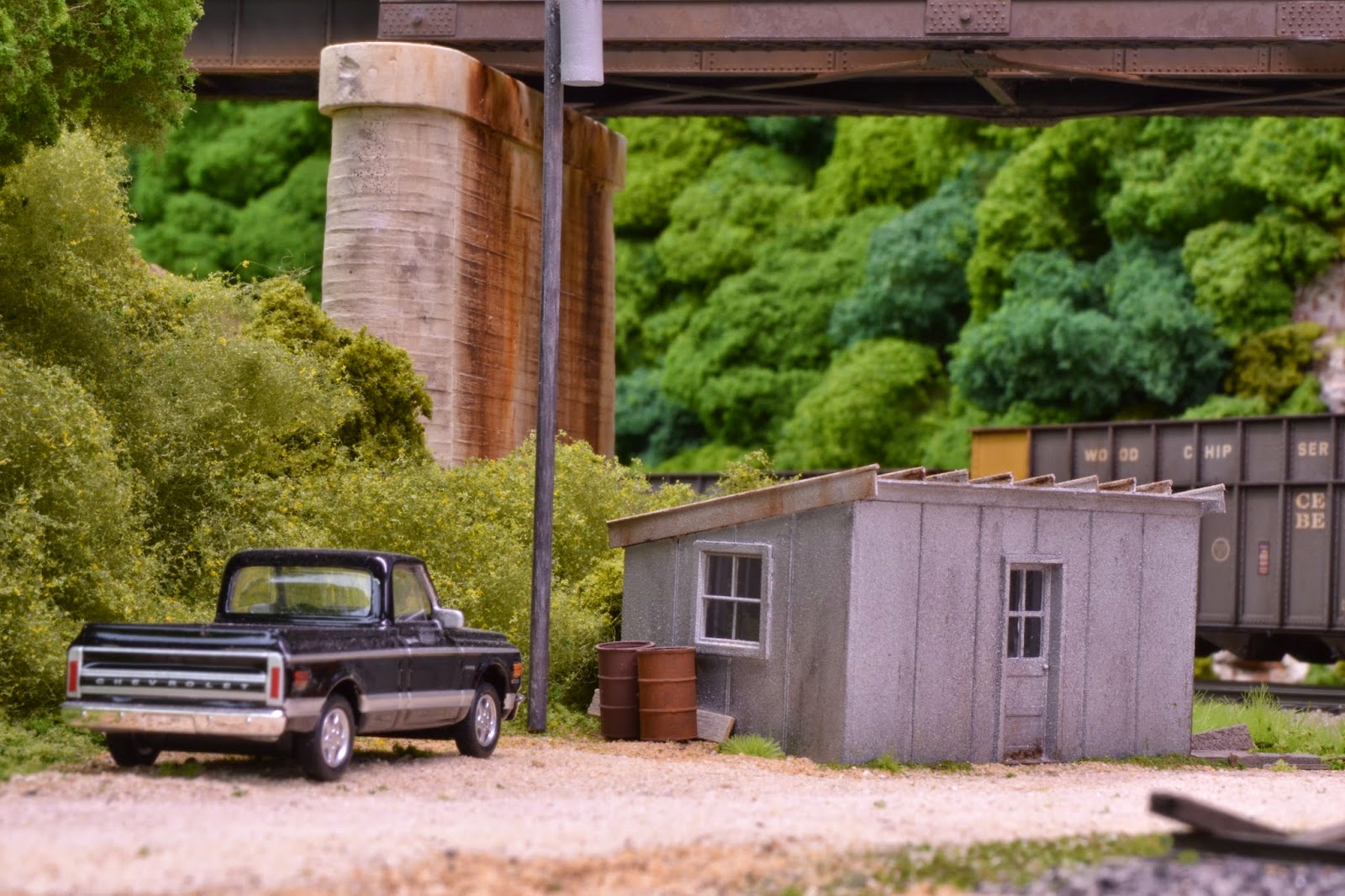 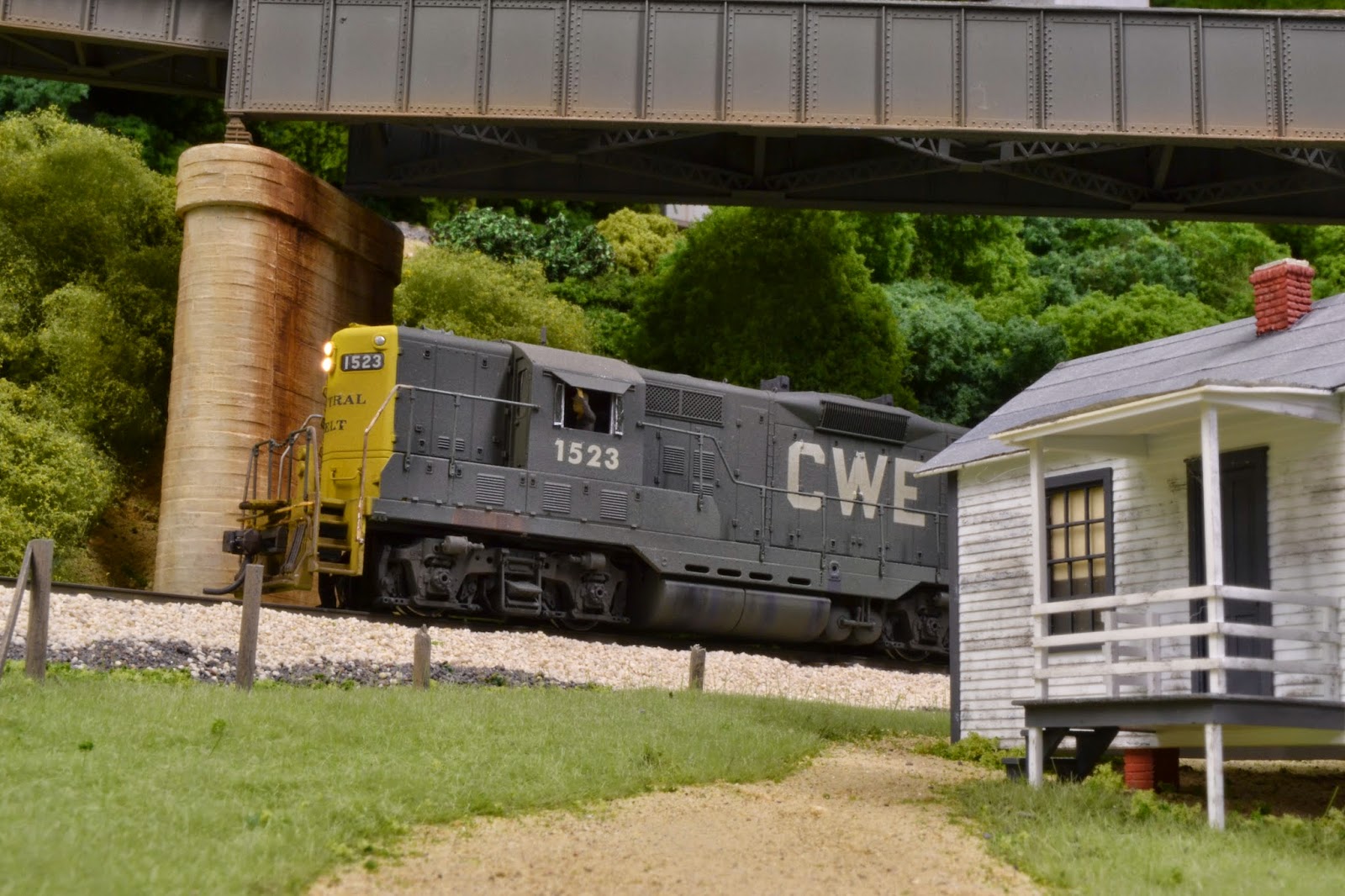 The next shot shows the eastbound signal at the west end of Big Chimney. I'm working on getting ABS up and running on this section of the layout. Of the fifteen signals in this area, 12 are now wired and operational and all of the block detection boards are in place. The Signals By Spreadsheet program is up and running thanks to the assistance of Gerry Albers. 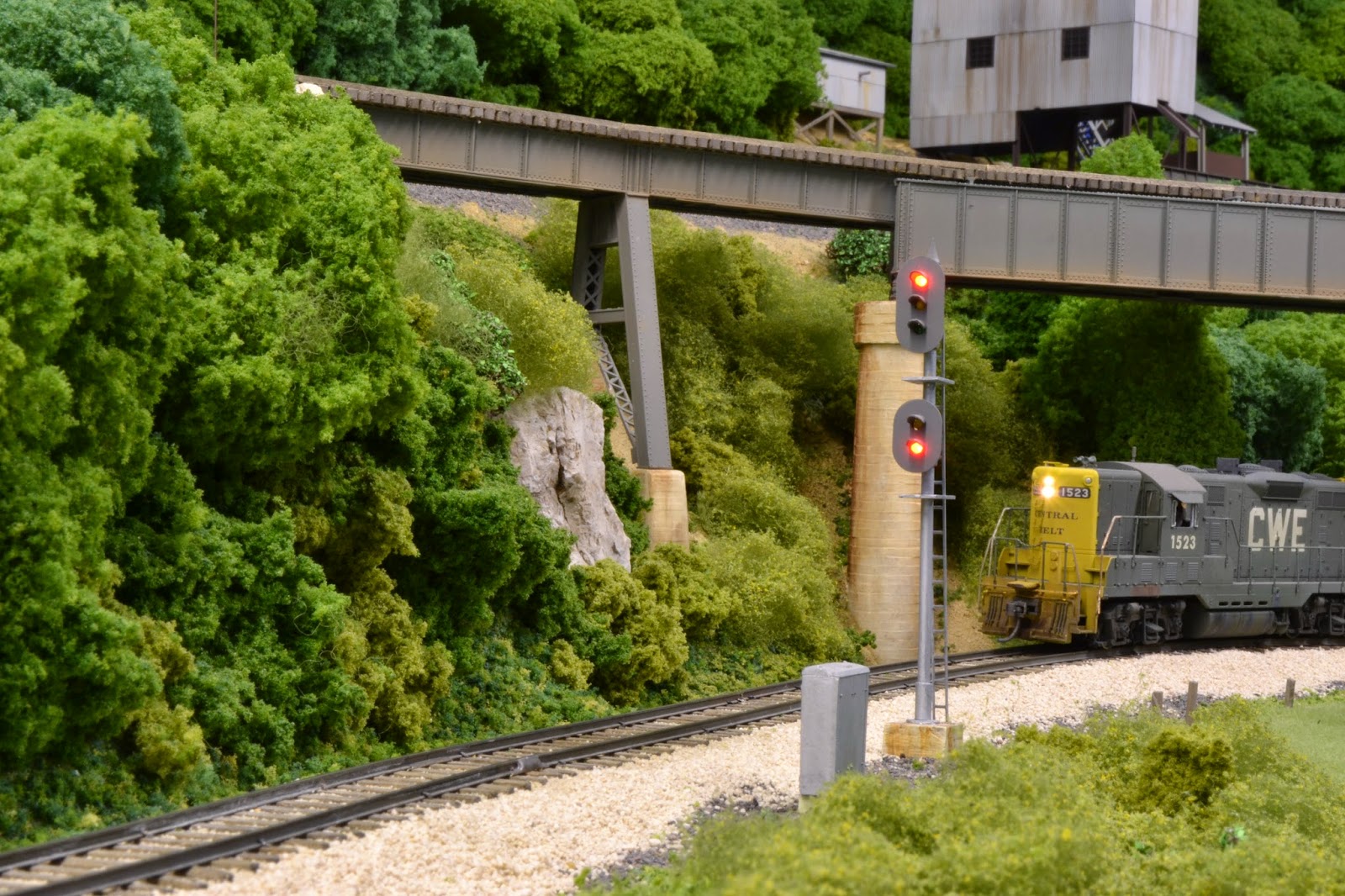 And here's what the area looks like right now as I make like a mole and crawl around under the layout hooking up wires. 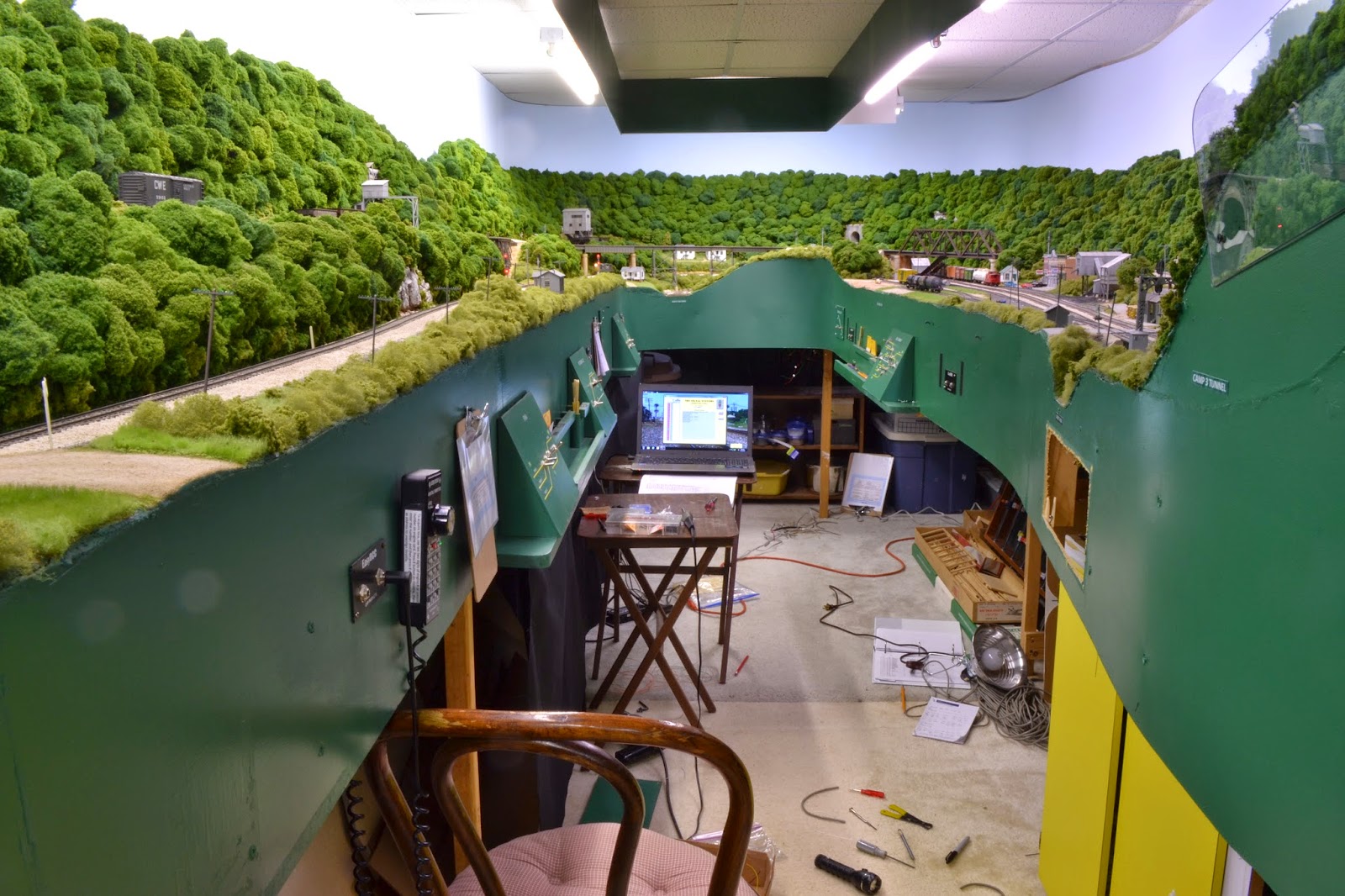 While I had hoped to have the signals operational in this area for upcoming session in January, it occurred to me the other day that I will need resistors on wheel sets in order to make that happen. Sigh... The resistors and the paint have been ordered, but there's just no way enough cars will done to make all of this work by then. Buying wheel sets with resistor on them is an option, but as my friends will tell you- I'm way too cheap to do that. Guess we'll just have to wait until the shop forces can get enough resistors installed.

Hope everyone has a wonderful Thanksgiving,

After numerous complaints from C&O fans about the condition of the caboose in the last post, it became clear that the car should be re-lettered to reflect its original owner. So check the "Yet Another Special Boxcar" post to see the correction.

My sincere apologies to all of you Chesapeake & Ohio Railway fans.
Posted by Tom Patterson at 8:07 AM 2 comments: