Some time ago, Anthony Hardy sent around a photo of a unique operation in the CSX yard at Ravenna, KY. Here's the photo along with his description: 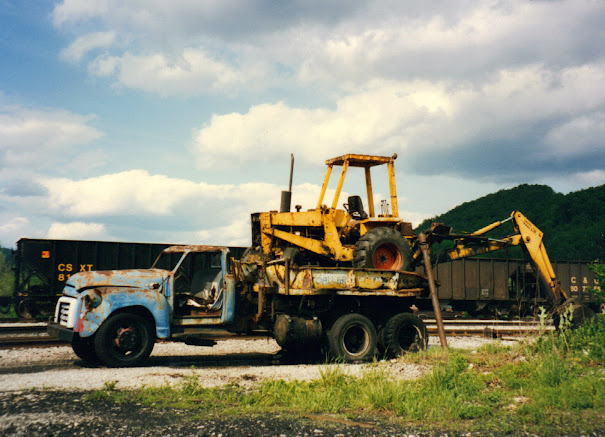 Basically though what the operation consisted of was an old backhoe that permanently sat on an flatbed truck with no doors and beat up dump truck. And of course a siding.CSX had a weigh in motion scale at Pryse about 4-5 miles from Ravenna yard. Sometimes they'd catch a car that was overloaded. Not every train...but somewhat a common occurrence. Just like a bad order, those cars had to be set out and corrected before they could continue.Yard crew would work the train to pull the overloads, then set them out on the siding, which of course the crews referred to as "the overload track".A local contractor, last name was Ballard, used the rear scoop from the backhoe to pull enough coal from the car to bring it into compliance. The coal was put in the old dump truck, then dumped on site. The dump truck was not used on the road, just onsite. There wasn't even a windshield in the dump truck.My understanding is that the contractor was given the coal in exchange for making the car 'legal'. After enough was collected, they would sell the coal, bring in a tractor trailer truck, and bring a front end loader, and load out 2-3 truckloads of coal. I don't know who they sold it to...probably spot market stuff. I never saw them load it back into hopper cars, but that would be definitely plausible for shipment.I also did see one time a centerbeam flat car loaded with fabricated i-beam floor joists spotted there. I don't know if the car was overloaded or if it got set out for some other reason but I can see where any heavy bulk load 'could' be overloaded. That was the only time I ever saw anything besides a coal hopper spotted there.The other interesting thing was when the cars were lightened, many times they were part of a privately owned unit train. However, they would not get tied back on to that train next time it came through. It normally would leave via the one regular mixed freight that originated at Ravenna. So you'd see one or two aluminum rapid discharge cars leaving on a mixed freight.It was a neat little operation for sure!

Of course, something like this just screams to be modeled, and I had planned on doing just that. The biggest challenge was finding the right backhoe and truck for my 1976 era. I spent some time searching the Internet but was unable to find anything that would work. Then Anthony came to my rescue with a picture of a backhoe made by GHQ Models and a link to their website. While the company is primarily a manufacturer of wargame models, they have a very nice line of HO scale kits of construction and farming equipment. Here's a link to the website: https://www.ghqmodels.com/ . I promptly ordered the backhoe kit and the project was on!

For the truck, I have a collection of old Roco military models that belonged to my father. One of the deuce and a half trucks seemed to be the perfect candidate as you could often find those in all types of service after they were sold by the military. Several modifications were made to the truck. The front axle was moved forward slightly in order to more closely match the prototype appearance and the sides of the bed were cut back to accommodate the outriggers.

Modifications to the backhoe included removing the arms for the front bucket. As can be seen in Anthony's photo, the bucket has been removed and the front wheels have been turned in order to get the backhoe as far forward in the truck bed as possible. The photo below shows the truck and backhoe after being painted. 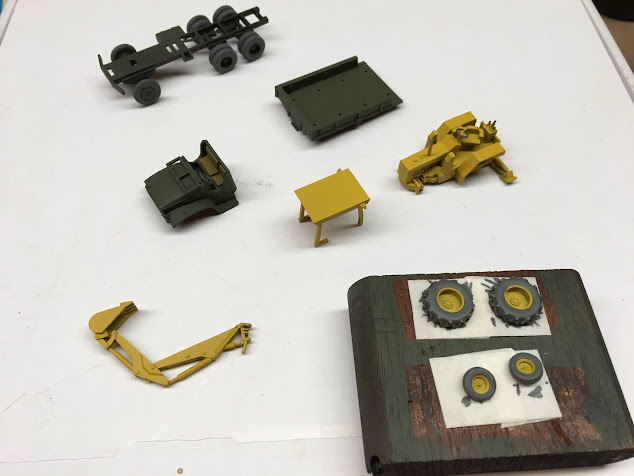 Next, the equipment was weathered using artist's oils and turpenoid. The pieces above were weathered separately as I wanted to make sure I could get into areas that might be blocked or difficult to reach once the vehicles were assembled. The photo below shows the results. 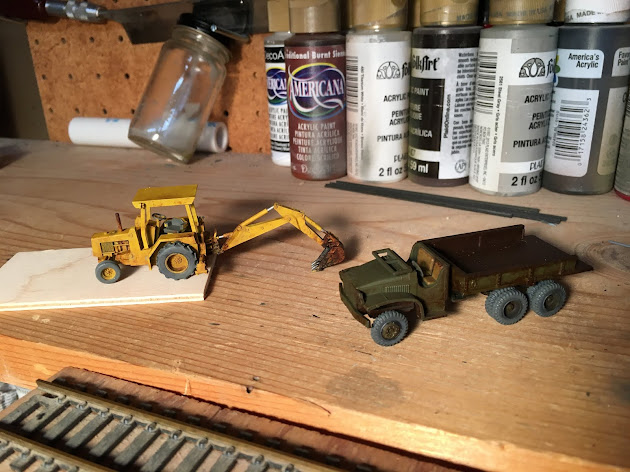 Finding a location for the operation was the easy part. There was an area of North Pierce that had never been finished because I couldn't decide what to do with it. One idea was to add an old boxcar as a storage shed. I also considered adding another building of some sort. And I was never really happy with the way the scenery around the truck loader turned out. There just wasn't enough coal on the ground around the structure and the tracks. The photo below shows how the area looked. 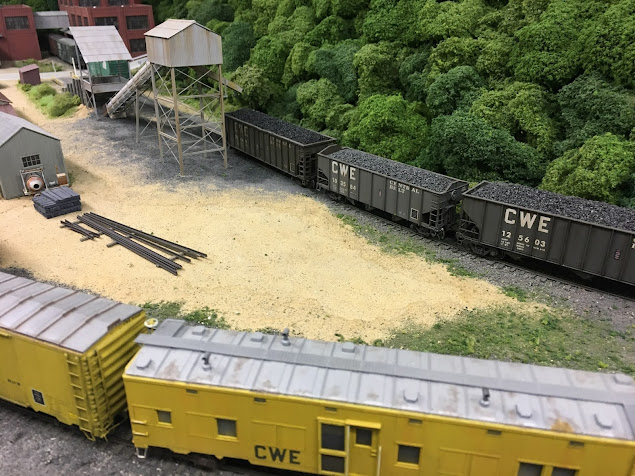 This area would be perfect- enough room for the equipment and coal on the ground and a place to spot a loaded hopper on the spur to the tipple. So the next step was to redo the scenery in the area. I used a combination of different colored grouts and real coal for the ground cover. The photo below shows the completed scene. 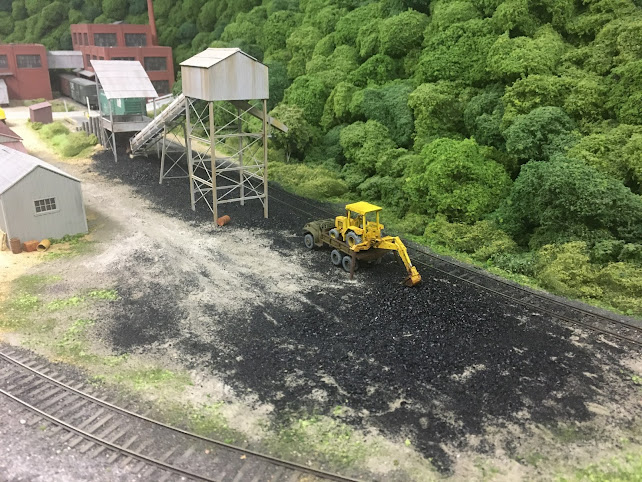 And here's a closeup of the truck and backhoe. Note that the outriggers have been added to keep the whole mess from tipping over! 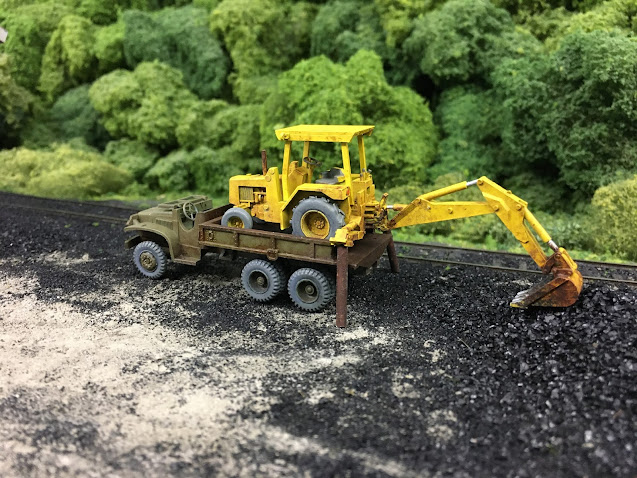 Of course, there has to be some kind of paperwork for the crews alerting them to the overweight cars. Using the template I have for waybills, I made up some "OVERWEIGHT" inserts that can be slipped into the plastic waybill sleeve. The photo below shows a typical coal waybill along with one that has been marked as overweight. Note that it includes where the car should be set out along the line and the location at North Pierce with the TIBS alpha numeric code (Hardy Coal Sales N16). Crews will now need to be on the lookout for Overweight cars in addition to Bad Order cars 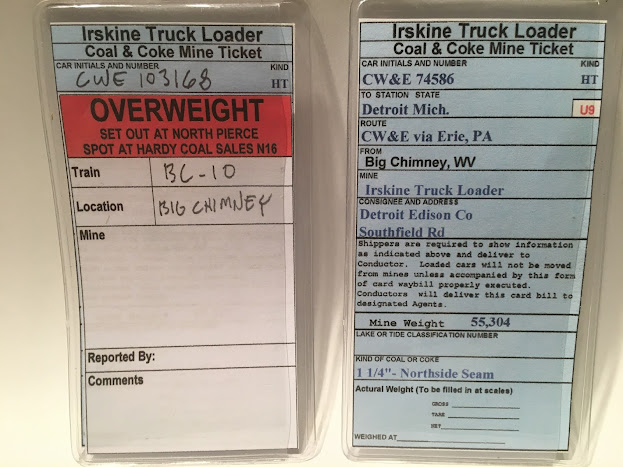 The photo below shows the MT's spotted at the tipple and the first loaded hopper ready to be relieved of some coal. 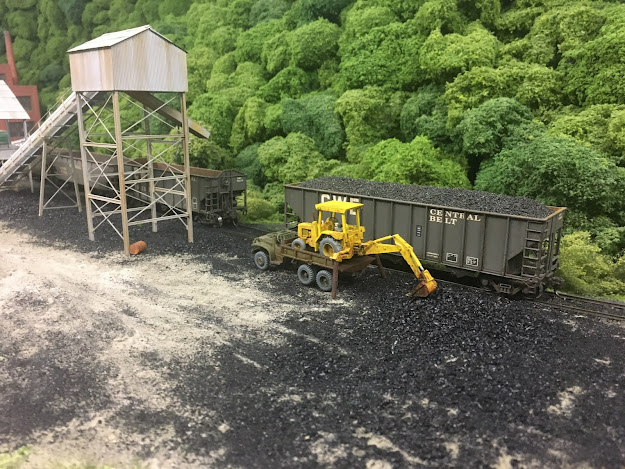 As for the name of the operation, it seemed only appropriate to call it Hardy Coal Sales. After all, it would never have happened without Anthony's photo, background info and help in finding a suitable backhoe. And if you know Anthony, then you know he has a wonderful sense of humor. When he originally passed around the email, he titled it "Ballard's Coal Scooper Outer." So this operation, while formally named Hardy Coal Sales, will most likely be referred to by the crews as the Scooper Outer!