As I mentioned in a previous post, Greg McComas stopped by last month for a visit. He brought along his GoPro camera and we shot a cab ride on the railroad. It begins at the engine terminal in Nelsonville and wraps up at the west end of North Pierce. Greg kindly loaded the video up to his YouTube channel so that I could post a link here.


Enjoy the ride, and thanks again, Greg!

Progress continues to be made on all of the projects that were listed back in parts 1 and 3 of the Finishing Stuff series of posts. The two pulpwood flats that were kitbashed from old Athearn Blue Box gondolas and Tichy pulpwood flat ends have been completed. The photos below show the two cars. 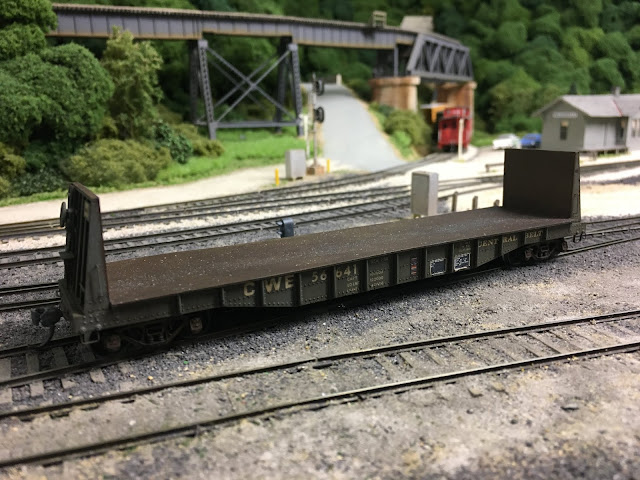 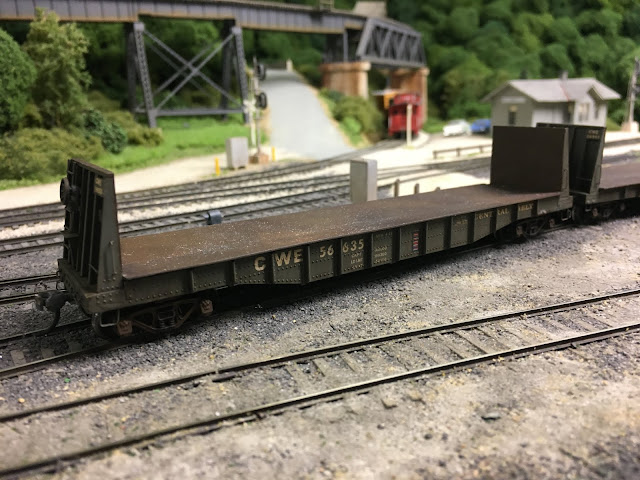 The inspiration for these cars came from a C&O Historical Society magazine article on gons that were converted to pulpwood flats. The photo below shows the cars in revenue service during the most recent op session. 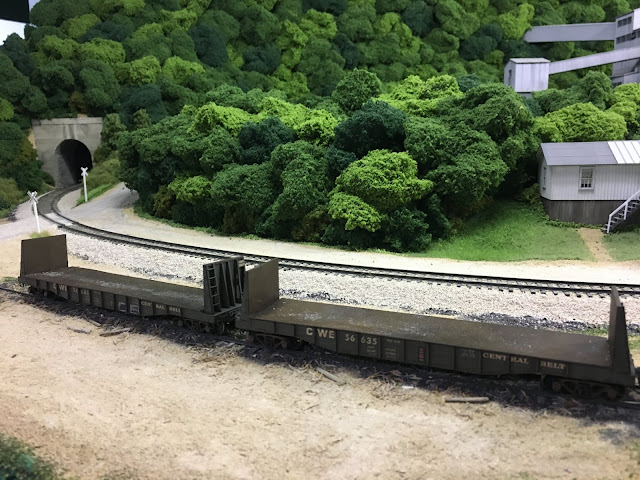 The Moloco SAL Fruit Growers Express car has finally been finished. It was weathered with artist's acrylics and Pan Pastels. 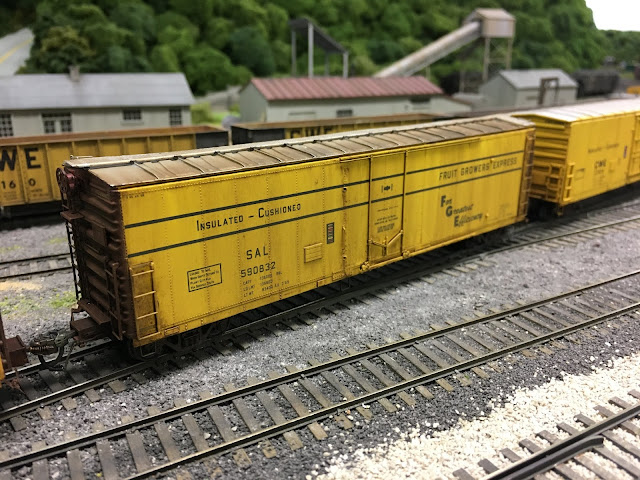 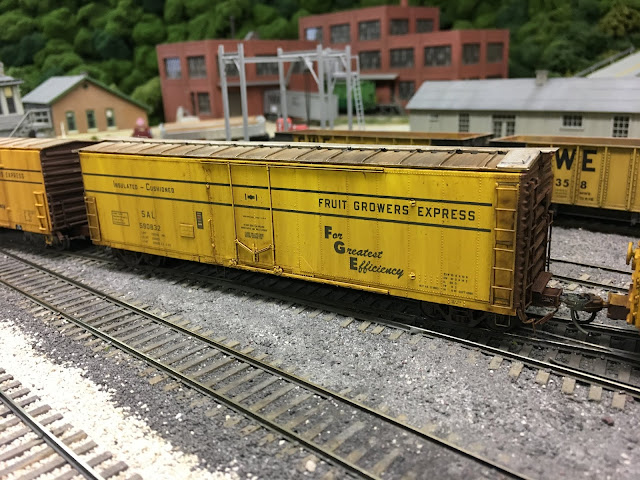 The roof of this car was weathered based upon the photo below by Richard Jahn. 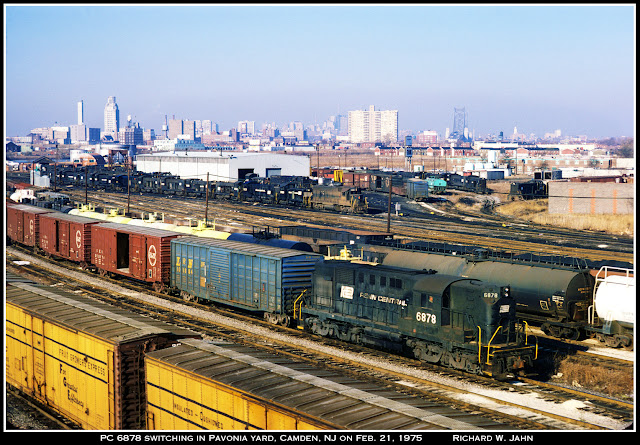 And one of the home road covered hopper cars is finally getting weathered. I've used artist's oils and water soluble oils so far. 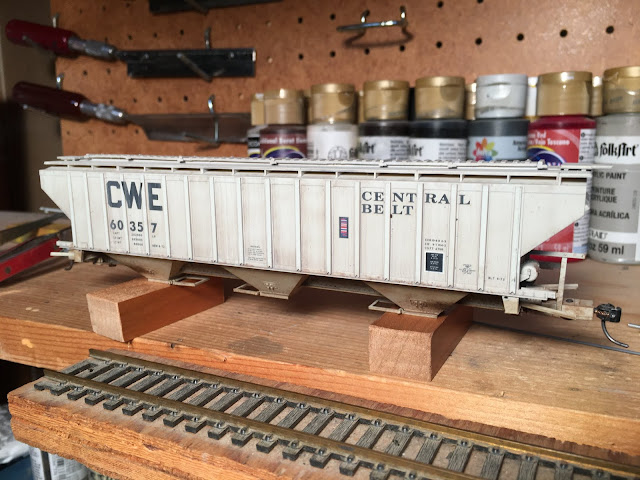 With a lot of additional time on my hands now, I've started several other projects. There is a Bowser Alco C628 in the paint shop that will be decorated for the home road. It will paired with a LV C628 that is in the paint shop to be weathered. And of course, there are still plenty of freight car kits to build. It's times like these that make me extremely grateful for the wonderful hobby of model railroading.

When I originally drew up the track plan for the railroad, I had absolutely no operating experience. I had read a great deal about track planning for operation, though, including John Armstrong's legendary book. Fortunately, most of what I had laid out originally works pretty well and what didn't I was able to change without much trouble. Except maybe the original west end staging...

One of the design issues that became apparent once I began operating was the grade in the yard at Nelsonville. The entire yard is on a grade of about 1.25% westbound. While this didn't seem like a lot during the planning phase, it's just enough to make it difficult for certain locomotives to push long cuts of cars up the tracks. And with advent of extremely free rolling wheelsets, holding cars on the grade has become a challenge. The solution to the lack of power was to replace the aging SW1200's with a GP7. The solution to holding cars on the grade is the Bartizek Brake.

My good friend Bob Bartizek is the owner and superintendent of the Pennsylvania & Western, a beautiful 3-rail, O-scale layout depicting the Pennsylvania Railroad in the early 1950's. Bob recently replaced a large number of his hopper cars with more accurate, and more free-rolling, models. And during a recent operating session, it became apparent that these cars weren't inclined to stay spotted at any location that had even the slightest grade. So Bob began to think of a way to make "brakes" to hold them in place. He discarded all of the usual ideas for various reasons. Then he hit upon the perfect solution- a small dab of ACC on top of the rail. A small blob is just enough to hold the car but not enough to impair movement over the track. And it's clear, so it's almost impossible to see. But most importantly, it's virtually maintenance free!

So armed with Bob's great idea, I finally had a solution to the brake problem at Nelsonville. The photo below shows the small dab of ACC on the rail near the west end of the yard. 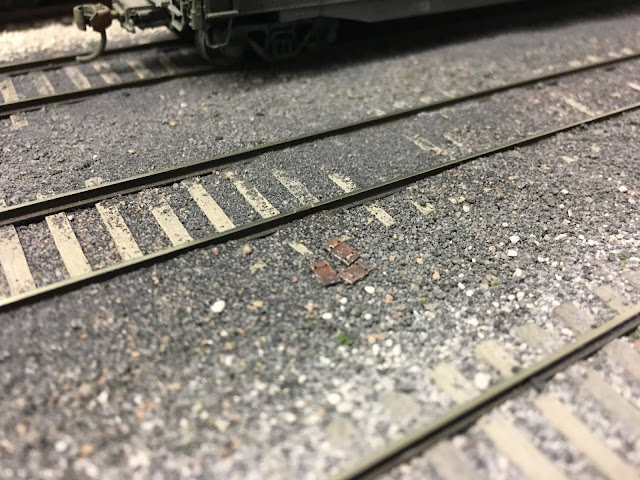 Note the ties plates- the small blob is right above them. The tie plates will help the crews identify their locations (it's almost impossible to see them!). And there are "brakes" on one rail on each of the yard tracks and the siding at this location.

The next photo shows the brakes at mid-yard. A small piece of tie identifies the location of these brakes. 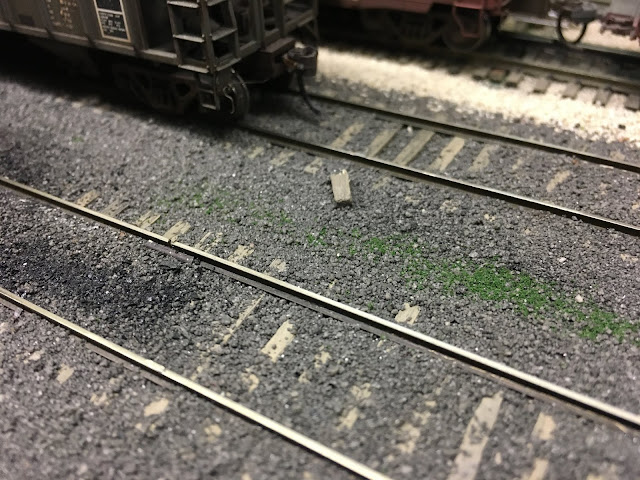 And the last brake is on the track near the east end of the yard. Once again, tie plates show the location. 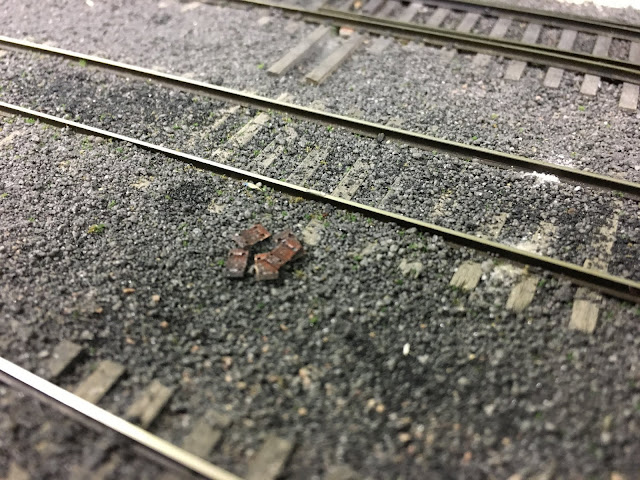 These brakes are just a really great idea. No mess, no fuss, nothing to operate, easily replaced, almost invisible and work as advertised. Thanks, Bob!

Posted by Tom Patterson at 6:40 AM No comments:

Earlier this week, Greg McComas stopped by for a visit. He was in town for business and had some extra time, so we got together for some photo ops. More to come on that later.

Greg is the creator of the Michigan Interstate St. Clair subdivision and you can find his blog here: https://michiganinterstatemodelrr.blogspot.com/. More recently, he has been posting updates to Facebook on the Michigan Interstate St. Clair Subdivision page. He has done a wonderful job of creating the backstory for his railroad and he is quite an accomplished modeler. As we both are followers of the proto-freelanced movement, we have been trading information and discussing possible run through connections for some time now. The fact that Greg models today's railroading environment has given us both the opportunity to model the other's railroad in a different timeframe. And I have mentioned in the past that there would be a MCIS car on the railroad some day. 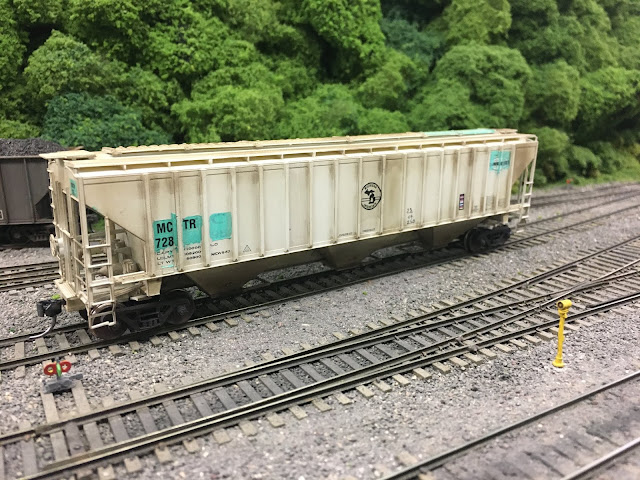 As you would expect from Greg, the car has a detailed history. Here's the summary from his FB page:


Greg did a beautiful job on the weathering and the patch job just looks great. Here's one last look as the car travels east at Summit Springs on GE-8 headed for Hunter's Bay, VA. 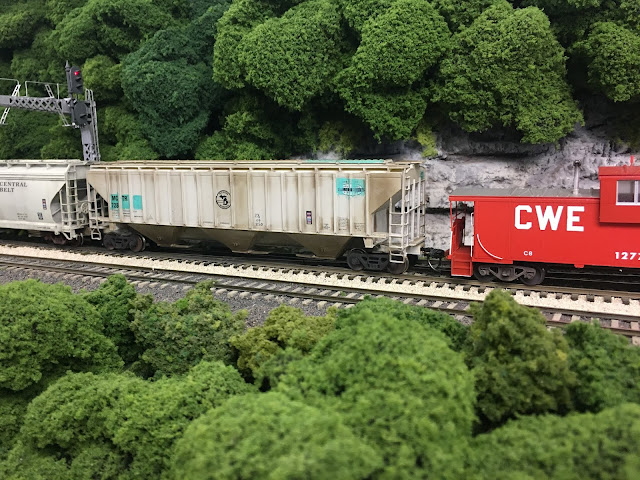 Thanks again for the nice gift, Greg- it was very kind of you.