A Couple of Tichys- finally!

Way back in March of 2017 I posted about tackling a couple of Tichy pulpwood flatcars. Roger Sekera commented that these kits have long been in the "pay someone else to do them" class. As Roger is an extremely accomplished modeler, his comment left me with a bit of trepidation. Well, two and a half years later- and after a  number of fits and starts- it turns out he was right.

The challenges with these two cars are almost too numerous to mention. Starting with the weight, or lack thereof, and ending with the trucks that didn't work, these cars almost didn't make it onto the railroad. Fortunately, I got a little inspiration along the way.

Just as I was beginning to tackle the grabs irons on the ends that make up the ladders,  I came across the car that Allen McClelland built for the V&O. The picture below shows the car in Alloy Yard on Gerry Alber's Deepwater District. 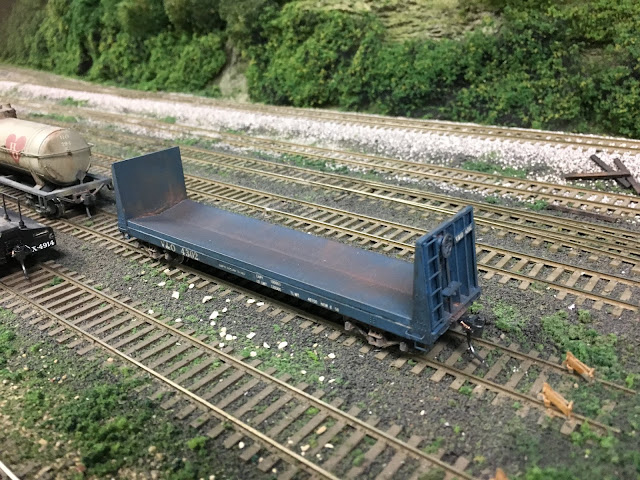 Note that Allen skipped the individual grab irons and added a ladder instead. When I mentioned to him that this was a neat addition, he replied it's one of the benefits of proto-freelancing. Within reason, we can decide how our freight cars are equipped versus having to follow a specific prototype. Note also that he included a steel plate on the ends for the reporting marks. This wasn't included in the kit or even mentioned in the instructions.

Allen also scratch-built a removable pulpwood load for this car. After cutting about 4,850 little stubby sticks and realizing that they would make up about one-one hundredth of the load, I bagged that idea. I added lead shot underneath the car for weight and will run it as an MT.

So here they are- the next two shots show the completed cars. 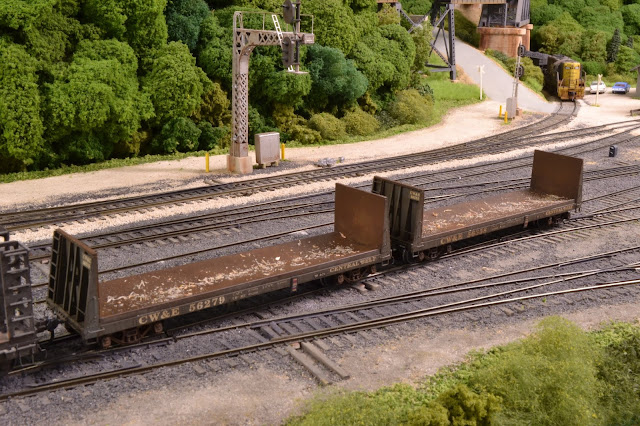 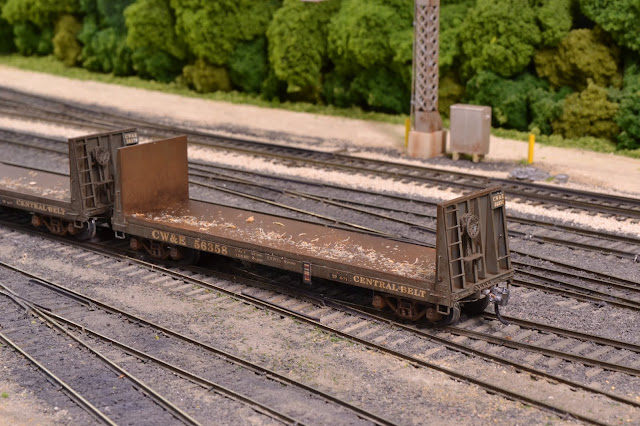 I added some pencil shavings and sawdust to the decks and called it a day. And while I'm pleased with the results, I can assure you there won't be any more of these cars on the railroad. Unless, of course, I pay someone else to build them for me.

After spending a brief period on the CWE, FPS 1218 hit the rails and headed for the K&LE. Big El is shown in the photo below out along the K&LE mainline somewhere east of Undercliff Yard. 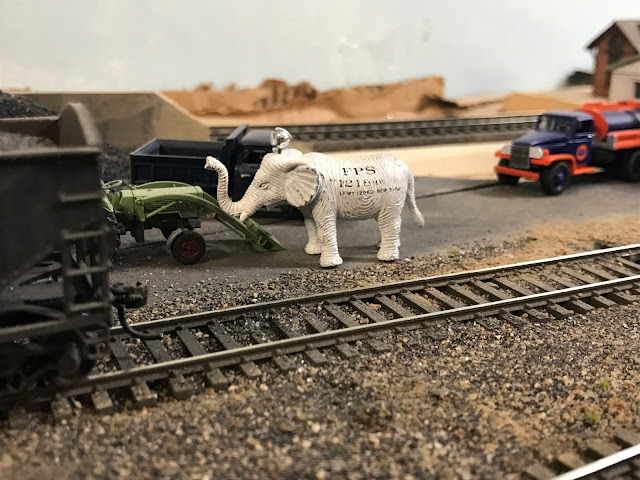 There's just no telling where Big El might show up next. Of course, it has to be found first...

Posted by Tom Patterson at 5:17 PM No comments:

As I was re-staging the Sand Fork Branch the other day, I noticed that one of the feet on the conveyor to the South Branch Loader was missing- see the photo below. I looked around the immediate area but it was nowhere to be found. It was probably knocked loose during the last op session. Given its size, I was doubtful I would ever find it. 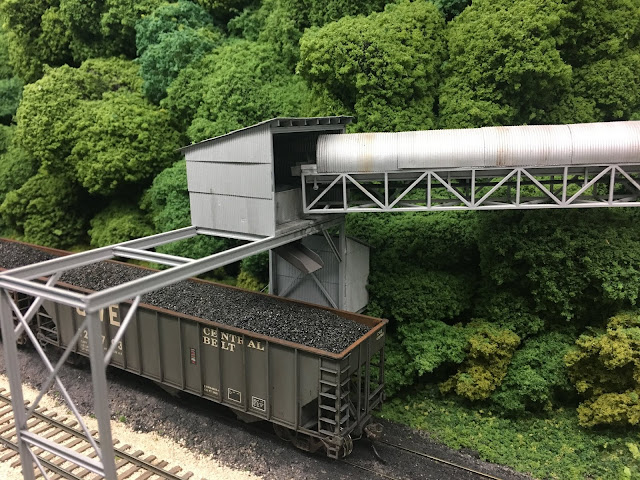 Earlier this evening as I was shuffling empties through Big Chimney, I noticed something silver in one of the cars. Sure enough, there was the missing foot- see the photo below. 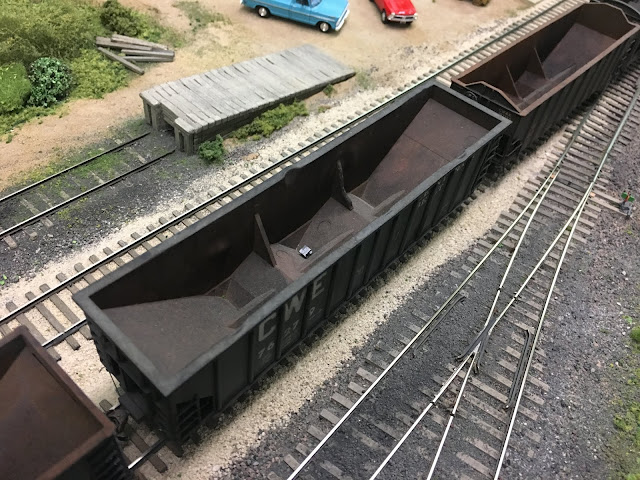 So the found foot will be reinstalled along with the railing on the safety platform in the middle of the bridge at Nelsonville that I knocked off. Again.

And something else was found right after the last session. Suffice it to say that it wasn't a piece of CWE equipment. More info on this later.

Posted by Tom Patterson at 7:47 PM No comments:

I got distracted in my recent efforts to finish up a number of projects that have been in the works for far too long. A recent post on the History of the Peavine Railroad Facebook page showed a picture of the N&W's sanding tower at Clare Yard in Cincinnati. It brought back memories of the drawings I made of the tower on the Southern in Ludlow, KY back in the early 1980's. And the photo at Clare showed some of the features that I wanted to include in the sanding tower that I've been working on for the last, ah... 35 years. So maybe this project should be included in the "finishing things up" category.

Back in 1984, I was living in an apartment in Cleveland. I decided to build a small diorama of engine service facility. It would be three tracks, a sanding tower, concrete platforms, and details that would be scratch-built based upon an article in Model Railroader. I got the tracks laid, the platforms poured, some of the details built, and had made a start on the sanding tower before other priorities got in the way. And then our cat chewed on the top of the sanding tower. Sigh. Everything went into a box to be fixed later.

Sometime later, I got inspired and opened the box. One of the biggest challenges with the project was the piping- how could I get an accurate representation of the fittings where the pipes joined one another? Remember- this was the mid-1980's and there wasn't a lot available in terms of commercial products. My solution was to use links of small chain. Individual links were removed and stretched into an oval and then slipped onto brass wire. The photo below shows the result. 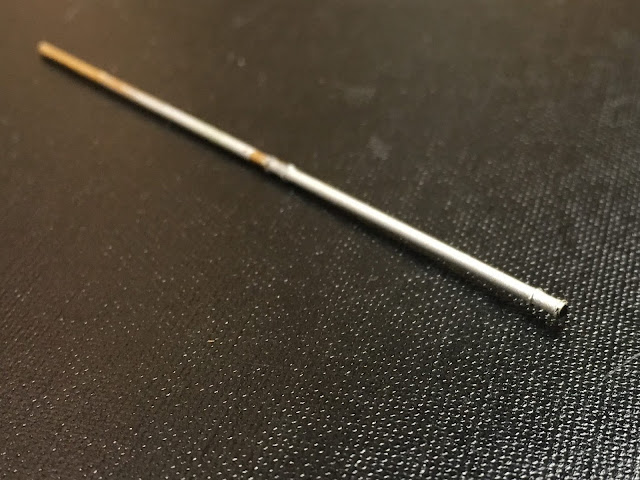 While the technique worked, it was incredibly challenging. And I was still left with trying to connect the separate pieces of piping. How would they be held in place while the 2-part epoxy dried? Was epoxy even the right glue? What about soldering? After making a bit of progress, the whole mess went back in the box.

Fast forward to the recent past. I was visiting my good friend Jim Rollwage's Denver Pacific and he had just installed a sanding tower in the diesel service facility at 36th Street Yard. It had the delivery piping that I had been looking for all these years! And it certainly seemed I could bash the piping onto my tower. Jim informed me that the sanding tower was the recent Walthers kit so I promptly purchased one.

Back to the original project. For whatever reason, I decided to build two sanding towers at the time. The first progressed to the point where the ladder was installed and it was painted. The picture below shows how it looks today. Some of the piping has been removed for use on the new tower and you can see where I tried to sand off the teeth marks from the cat. 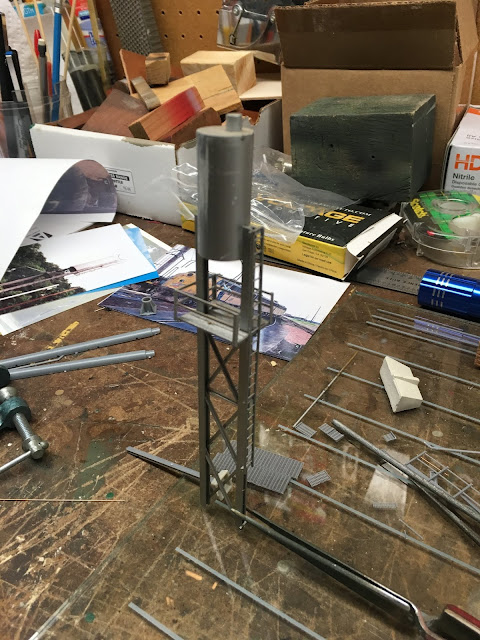 The second tower only got as far as the Plastruct frame. As it turns out, the sanding bin in the Walthers kit just happened to fit perfectly between the two I-beam uprights. And I could making the piping work. And I could add some Tichy grating and ladders. And this will take a lot of planning. And so on. And back in the box it all went. That is, until I saw the photo at Clare.

The picture below shows the progress on the new tower. Everything is coming together fairly well, and while it has taken a bit of imagineering and planning, I'm excited to get it finished. 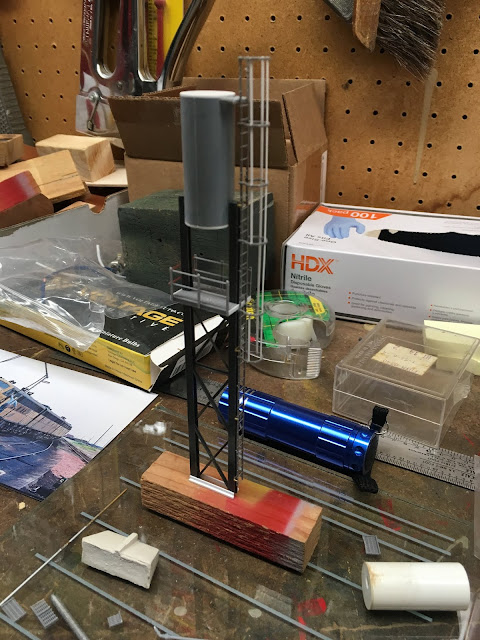 With any luck, the railroad will actually be able to add sand to diesels in for service at Hollister Yard in the not-too-distant future. Unless, of course, I get distracted again.