For the L&N guys

As I've mentioned before, I rely on prototype photos for inspiration. Being able to see something in a photo from my era provides both the motivation and the colors to recreate it in miniature. And so it was when I came across the photo below of a yard in Allentown, PA in 1975. 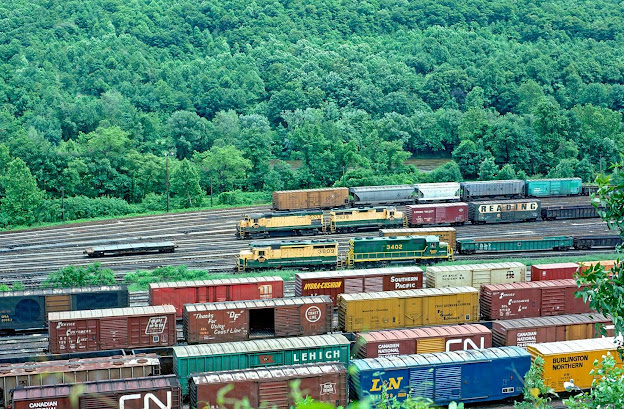 I could model every freight car in this photo and have already done the Lehigh Valley X58 boxcar, albeit in a modified version of the old Athearn BB kit. But it was the L&N boxcar in the lower right hand corner that caught my eye recently. I seemed to recall having purchased a similar car from the second-hand inventory at the old Tim's Trains a while back. Sure enough- I bought two of them. They are the old Intermountain kits that were part of a run done by the Louisville & Nashville Historical Society.  I assumed the paint scheme and numbers were correct and a quick check with my good friend Stuart Thayer confirmed it. In fact, Stuart worked with Intermountain on the graphics for the kit. In addition to being a very accomplished modeler, Stuart is a long-time member of the L&NHS. He is also one of three members of the operating crew on the railroad that are dyed in the wool L&N fans/modelers. So it was only fitting that a few cars from their favorite railroad should show up occasionally during an op session.

I only made a few changes while building the kits. I added cut levers and wire grabs at the bottom right hand side of the ends and replaced the plastic stirrup steps on the left side of the sides. I also replaced the COTS stencils as the ones on the kit appeared too small to me. With the addition of metal wheels and an ACI label, the cars were complete.

The photo below shows the two cars after a trip through the paint shop. 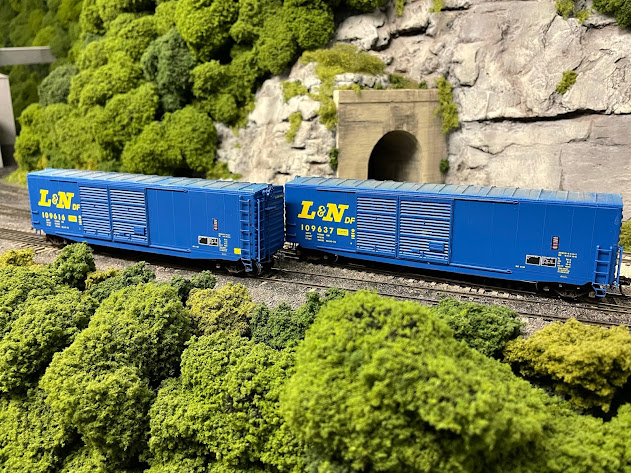 The roofs of the kit were painted the same blue as the rest of the car. It was difficult to see in the original photo just what the roof looked like, but it appeared to have some peeling paint in addition to some faded paint with perhaps a little rust. I blew up the photo to get a better look and you can see what I found below. 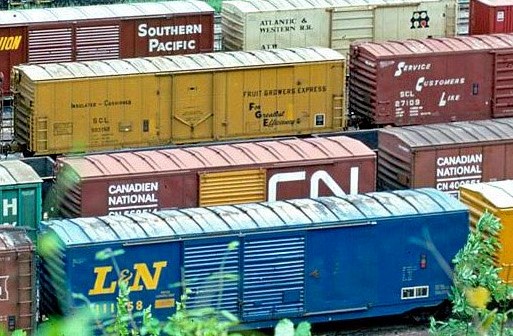 I decided to paint the entire roof silver and then come back and add some blue to represent the old paint. I used Vallejo Model Air Aluminum followed by Testor's DulIcote for the base layer. I then mixed Vallejo Model Color Medium Blue with a little white and applied it sparsely using a cosmetic sponge. I got a little too aggressive with the blue and ended up going back over the roof with some Aluminum applied with a cosmetic sponge. Lastly, I added a little artist's acrylic burnt umber to represent rust in a few locations. The photos below shows the results. 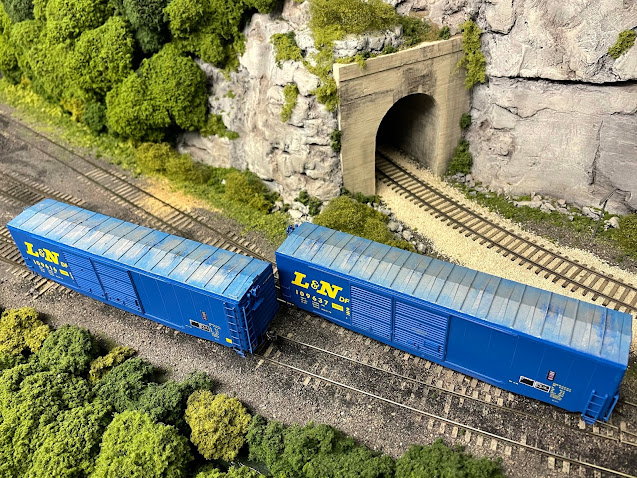 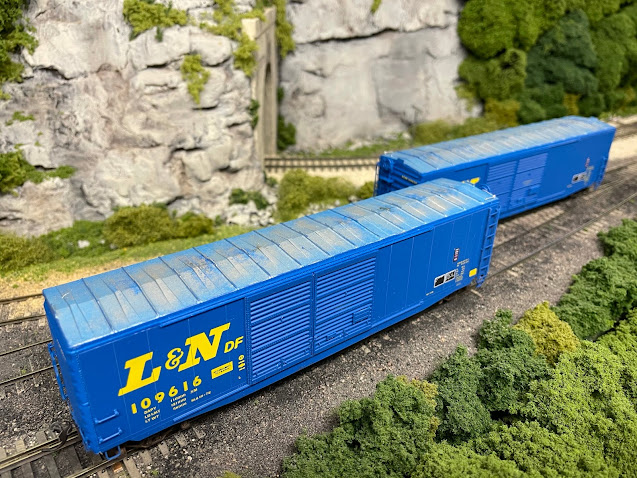 The trucks were weathered with the usual combination of artist's acrylics and powders. Once a few waybills have been made up, these cars will be ready for revenue service!

Posted by Tom Patterson at 8:51 AM No comments:

Continuing with the freight car improvement program, I tackled an old E&B Valley 65' mill gon this past week. I built this car back in 1991 and was pleased at the time with the weathering. I used oils to represent rust on the exterior and a wash of oils mixed with ground foam to dirty up the interior. However, the car had that monotone look that came from a lack of detailed weathering on the trucks and a basic overspray of Floquil Grime. The photos below show the car before the trip through the shops. 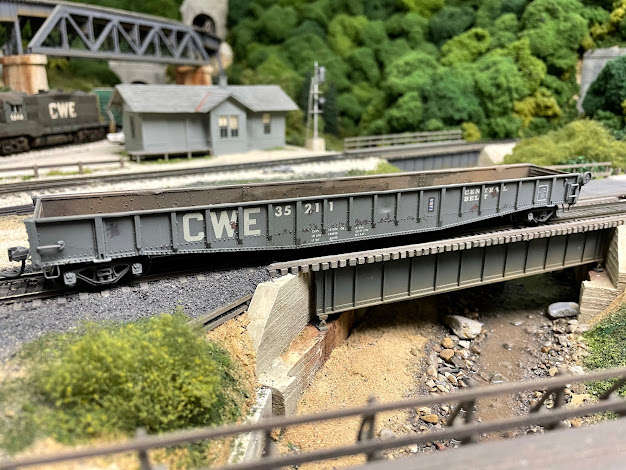 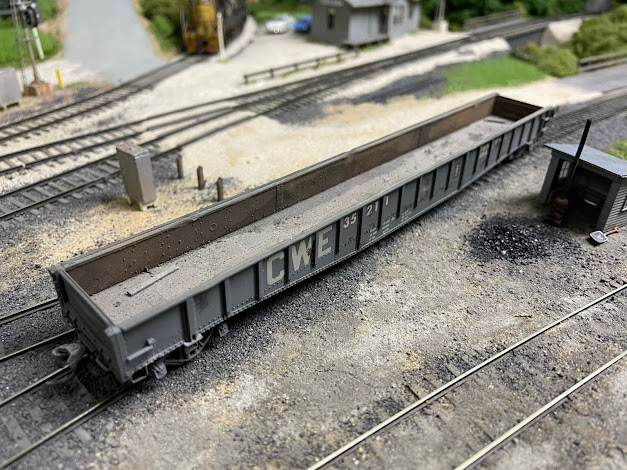 These old E&B kits took a lot of work in order to get them to look good and run well. In addition to adding weight to the underframes, the truck bolsters needed to be modified. This resulted in the removal of the sleeve that the trucks fit over, and if you then used the trucks that came with the kit, there was way too much side-to-side play in them. Consequently, they wouldn't track very well and were prone to derailment. I decided that if I was going to spend time re-weathering these cars, I was going to fix the truck problem.

I dug through my parts and found some old Kadee sprung trucks that have a small hole in the bolster for the mounting screw. Using a 2-56 screw, this eliminated almost all of the side-to-side play. Next up was weathering. I used a combination of artist's acrylics, AIM powders and MIG pigments to improve the overall look. The photos below show the results. 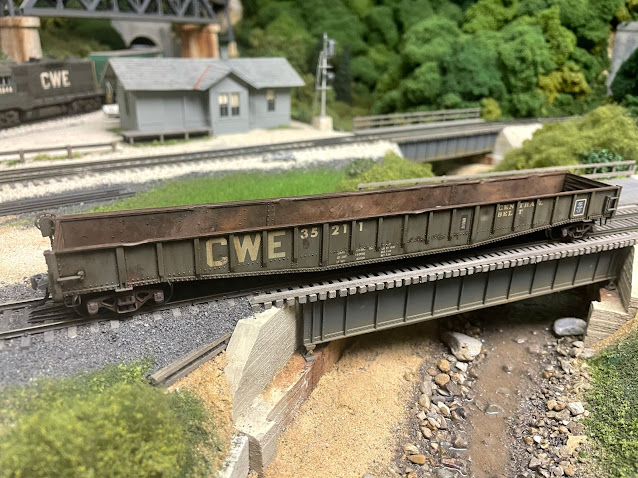 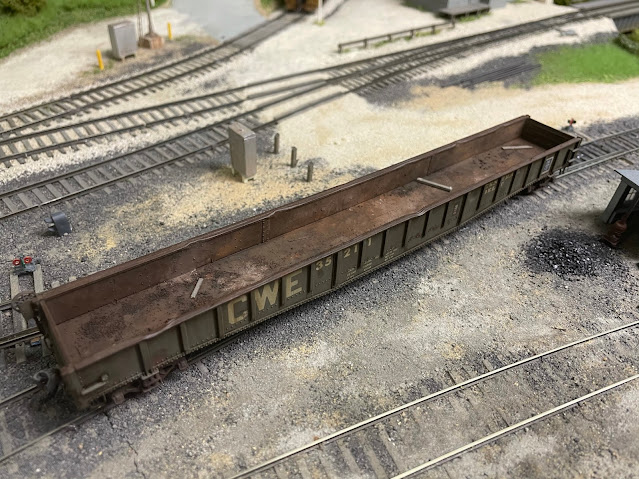 Now the car can be billed to go anywhere on the railroad and not be restricted to one of the branches. Guess that means I need to come up with a load of some kind!

Along with the SD9 that was added to the roster recently, the shops have completed another Alco C628 for the railroad. This is one of the original Stewart kits from back in the day. 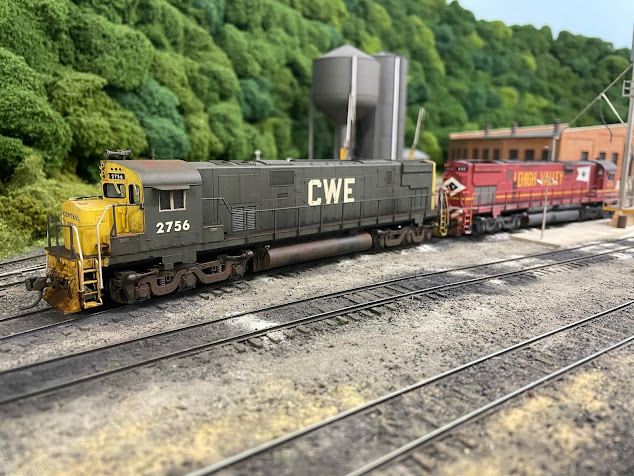 It was originally intended to be a powered unit. I have another one of these older models on the railroad and it runs extremely well. But after installing a Tsunami in this one, I couldn't get it to run smoothly to save my life. So I yanked the decoder and the motor along with the gears and turned it into a dummy. It will initially be paired up with the Lehigh Valley C628 in the photo above along with an SD45 that's ready to be weathered. 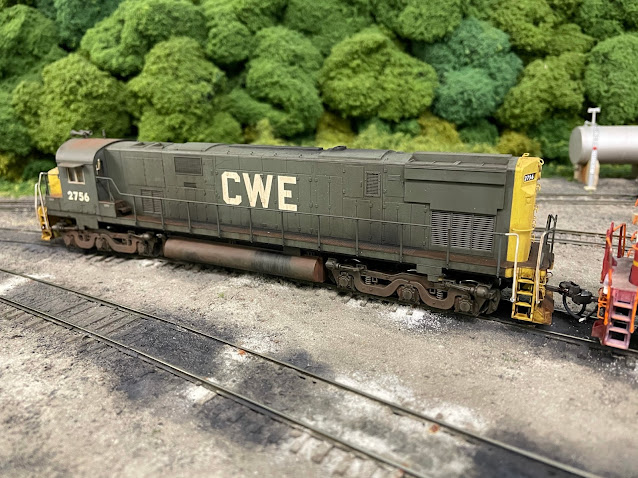 I used the usual assortment of artist's acrylics, weathering powders and Pan Pastels to weather the unit. While these Alcos were delivered in the Phase 3 paint scheme with the large "Central Belt" on the long hood, they were subsequently repainted in to the more modern Phase 4 scheme seen in these pictures.

Posted by Tom Patterson at 2:23 PM No comments:

One of my good friends asked me some time ago if there was a way to subscribe to the blog so that he would be notified by email when a new post showed up. I spent a little time looking through the design setup and couldn't find anything, Well, that friend is now setting up a blog for his railroad and, of course, he found it in no time. So now you will be able to subscribe by entering your email address in the gadget to the right of this post.

As soon as Keith's blog for his Suffolk Northern is up and running, I'll get the word out here. You won't want to miss it as Keith does some fantastic transition era modeling. And his railroad is a real treat to operate.

And thanks, Keith, for the instructions on email subscribing!

Posted by Tom Patterson at 5:37 PM No comments: