Perusing pictures of freight cars occasionally provides me with inspiration. Such was the case recently with an Atlas 53' Evans double plug door boxcar that I purchased some years ago. I bought it used and wasn't sure at the time if the paint scheme was correct or not. As I found out later, Atlas does a pretty good job of replicating prototype paint scheme and this car is a very good representation of the prototype. I stumbled across a few photos of this car on the Internet and it appeared to have a painted roof, or at least a significant amount of overspray of the orange on the sides. I didn't recall that being the case with the model, so I grabbed it to compare to the photos. Sure enough, the Atlas roof is painted to represent galvanized steel. It occurred to me that I could mix up a color close to the color on the sides and paint the roof. So armed with a little inspiration, I set off to get this car on the railroad.

The first step was to add cut levers. Plano Model Products makes a number of variations of the type used on cushioned underframes and this particular car has the Stanray style sliding cut bar. These come as a kit with five separate pieces for each lever. Having never built these before, I was a little apprehensive. However, everything fit together perfectly and the kit was much easier to construct than I anticipated. The photo below shows the cut bars. 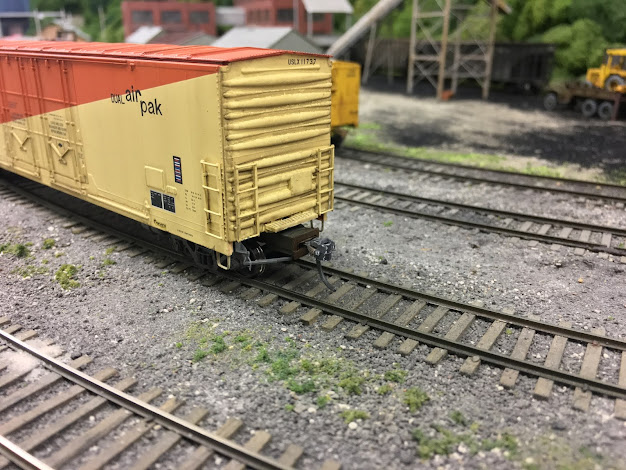 After adding A-Line stirrup steps, I painted the trucks and underframe with Rust-Oleum Weathered Wood color Roof Accessory Spray paint. This line of paint is dead flat and comes in several colors that are great for model railroading.

Next, I masked off the sides and ends and painted the roof. The color isn't an exact match, but a little weathering goes a long way toward making it appear to be correct. The photo below shows the roof. 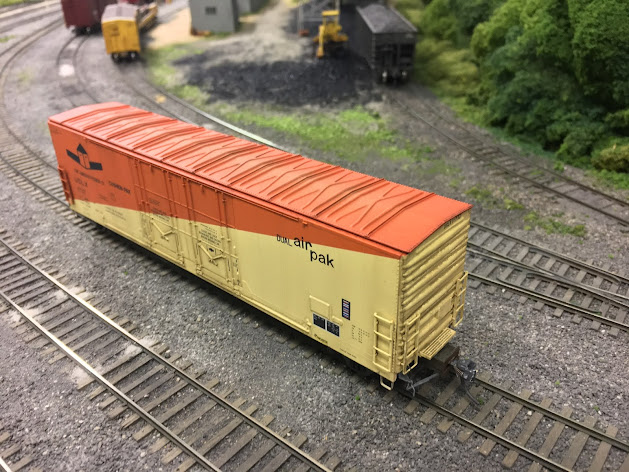 I added an ACI label, sprayed the entire car with Dullcote, and then weathered it lightly using artist's acrylics and Pan Pastels. This car was built in 1974 and wouldn't have had time to acquire much dirt and grime by 1976. 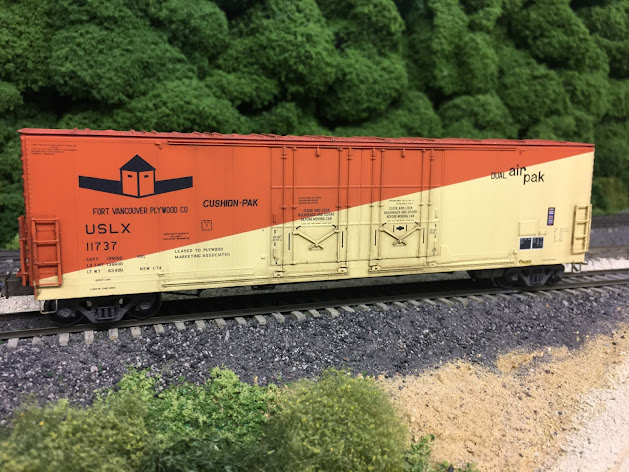 This was a fun build and the chance to add some prototype details to a ready-to-run freight car.

Of Heralds and Paint Schemes

It all started innocently enough. There is a group of us that are interested in coal hauling railroads and we trade emails back in forth. The topic of Alco RS3s on the L&N came up and there were a number of great photos posted. I made the comment that I just might add a couple of RS3s to the roster for a mine run. And that was the start of an amazing deep dive into the railroad's locomotive history and some beautiful first generation diesel paint schemes.

Before I go any further, let me introduce Dan Borque. As I'm sure many of you know, he is the owner and proprietor of the Appalachian Railroad Modeling website and you can find it here:  https://appalachianrailroadmodeling.com/. If you haven't checked out this site, you need to- it's filled with beautiful models, great prototype information and stories, and more track plans than you will ever find in one place. Dan is one of the most prolific track planners in model railroading and his plans have been featured in many publications. He is also an incredibly skilled modeler who is currently working on the St. Charles Branch of the Southern Railway. Here's a link to the website: https://appalachianrailroadmodeling.com/stcharlesbranch/.

So shortly after the comment about the RS3s, Dan mentioned that it might be neat to do an "an Alco-designed lacquer scheme with lots of curves and stripes and a more practical grey and yellow for repaints." The next thing I know, there's a great looking picture of an RS3 in the proposed as-delivered paint scheme. After some input from the group and some back and forth between the two of us, Dan came up with what you see below. 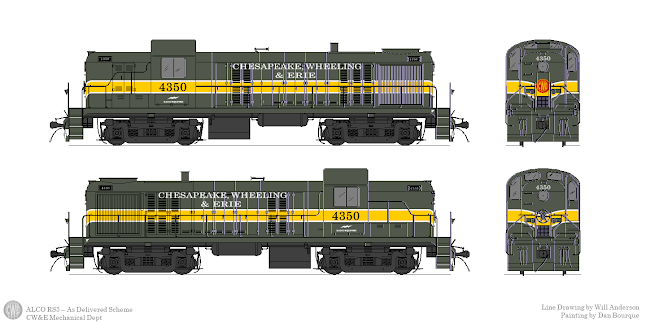 Dan found some beautiful locomotive line drawings that are the work of Will Anderson. With a little bit of manipulation, he was able to add color to the drawings. Note that he also added credits at the bottom of the print.

In short order, Dan was working on the original scheme for the F units, the GPs, and a herald. Somewhere in all of this I provided him with the first diesel roster that I had developed when I originally planned the railroad along with a much later version. Dan then asked if I had ever done an analysis of total horsepower versus number of units over the years. This led to a deep dive into the roster- models, years acquired, numbers, horsepower, retirements, paint schemes- for the period from initial dieselization through August, 1976. The Excel spreadsheet that Dan prepared with all of this information is simply amazing.

There is much more to come on all of this. And I still can't believe I was fortune enough to have someone with Dan's talent pull all of this information together and develop such great looking paint schemes. But for now, I'll leave you with the steam era herald that Dan developed. 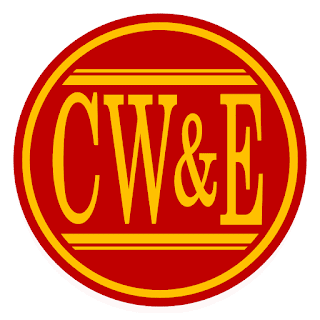 No, not in the bathtub, but in the railroad room. During a recent op session, there were several instances of turnouts being thrown inadvertently. From all available evidence, it appears these were the result of a crew member bumping up against one of the pushbuttons on the panels. It one instance, it caused a massive derailment of a westbound MT coal train. And in fact, one crew member wrote up an occurrence, stating that he had actually observed a protruding belly commit one of these infractions.

The unnamed crew member who observed the pushbutton faux pas suggested a possible solution to the problem. His idea was to make clear cover with finger holes for the pushbuttons. I had some leftover Lexan clear plastic from a previous project, so I got to work.

The first step was to print out a copy of the panel to use as a template. I then measured the distance from the top of the pushbutton to the panel, substracted the width of the Lexan, and made stand-offs from Evergreen styrene tubing. Add some nuts and bolts and you have what you see below. 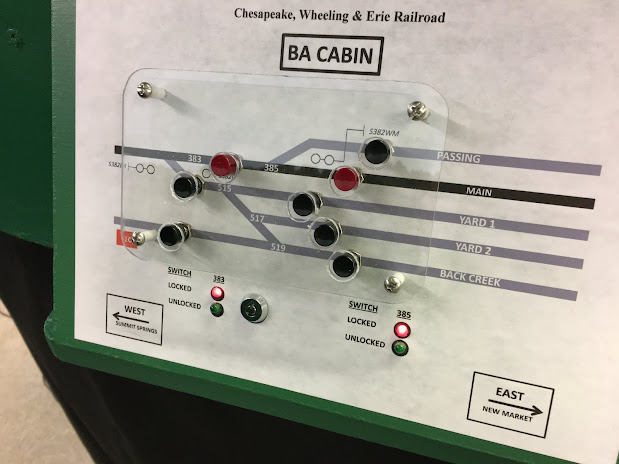 A close-up view of the Panel Protector (patent pending) shows the distance between the cover and the top of the pushbuttons. 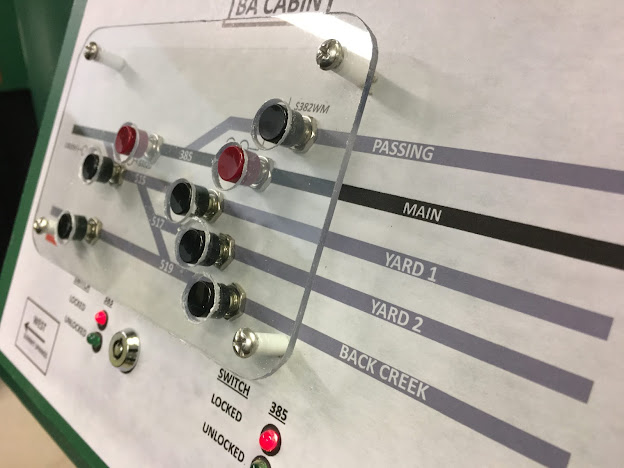 I need one more of these for the panel at Summit Springs. Crews working the mines there need to lean in a bit to reach the cars and it would be easy to bump one of the pushbuttons while working a cut of cars.

Now I just have to hope that the fingers of the fa.. er, waist challenged crew members will fit through the holes in the covers!

The CWE was featured in the June 2016 issue of Railroad Model Craftsman and the article included a beautiful track plan drawn by then editor Stephen Priest. I recently received permission from Otto Vondrak, the current editor of RMC, to post the plan on the blog with proper accreditation.  So here it is! 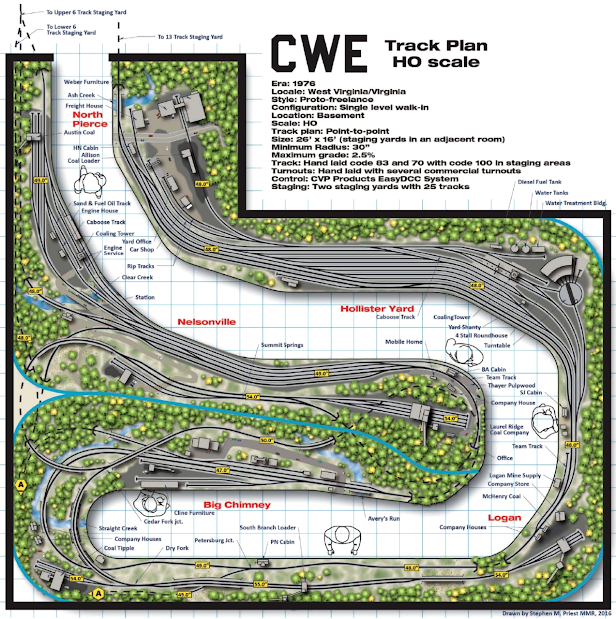 This plan is the result of Stephen's amazing talent and interest in the railroad, and I'm grateful to him and the folks at White River Productions for taking the time to make this happen.