While looking through my Facebook feeds this morning, I came across a photo on the Freight Car Enthusiast page that really caught my eye. It's a picture of a 40' Penn Central boxcar painted in Bicentennial colors. While that's not unusual in and of itself, it's the fact that the car is assigned to wreck train service that makes it so unique. The photo was posted by Eric Werner and is from his original slide collection. 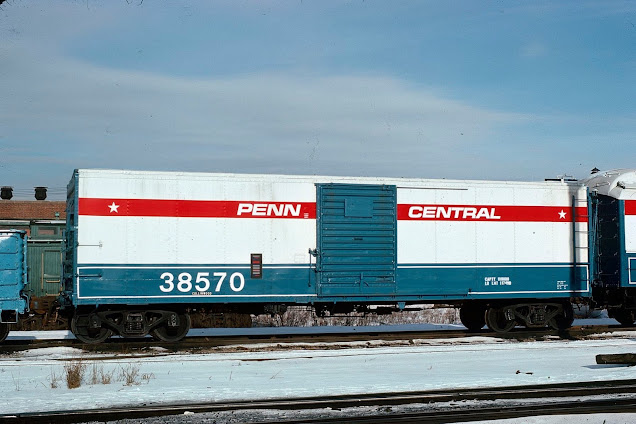 The caption for the photo said it was taken in Cleveland in 1976. If you look closely at the lettering under the road number, you'll see that it says "Collinwood." So one could assume that this car was assigned to the wreck train based out of the ex-LM&SS/NYC complex in Collinwood, Ohio, on the east side of Cleveland. Shortly after posting this photo, Eric posted a picture of the entire work train. 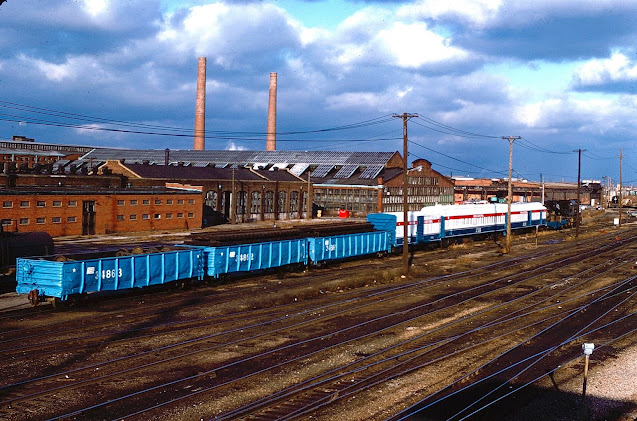 In the photo above, you can clearly see the old back shops and locomotive erection buildings that were part of the Collinwood yard. But what really caught my eye, in addition to the somewhat odd paint scheme for a wreck train, was the specific equipment. Note the two gons with panel track and the gon with trucks. Also note the coach and baggage car. On the far side of the baggage car is the boom tender along with the crane.

This photo is exactly what I needed to fill out the rest of the wreck train on the railroad. I'll add three gons like those above and similarly outfitted. Add a coach or some ex-troop sleepers and viola! Wreck train ready for service!