Slowly but surely, I'm making progress on the scenery around the east end of Nelsonville. It's another one of those locations that requires construction of lots of little pieces in order to get close to "finishing" the scene. And there were several fits and starts along the way.

For whatever reason, I never seem to be able to complete a scene from start to finish in a relatively short period of time. I get to a certain point and then have to leave it for a while. And sometimes, a long while. All of this is in part because I've never completely planned a scene ahead of time. I have a general idea of how I want it to look and I can get it started. But sometimes it takes a long period of time before all of the pieces come together. I'll find inspiration in a photo for something in a certain scene and that will get the creative juices flowing again. I'm then off to the next point where additional inspiration is needed and progress comes to a grinding halt. It's all probably the result of a medical condition of some type.

After the station was in and the basic scenery was complete at Nelsonville, I needed to finish the eastbound signal bridge before I could go any further. And of course, I would need relay cabinet and power switch machine too. And something to protect all of this from the coal truck traffic bouncing along the gravel road on the way up to Summit Springs. So as the signal bridge was being finished, I thought about what kind of protection for the railroad equipment would be most appropriate. I settled on a "fence" of old rail that would be painted MOW yellow. I cut up code 55 rail, planted posts and added the top rail in a similar fashion to what is seen to the left of  HN Cabin in the photo below. 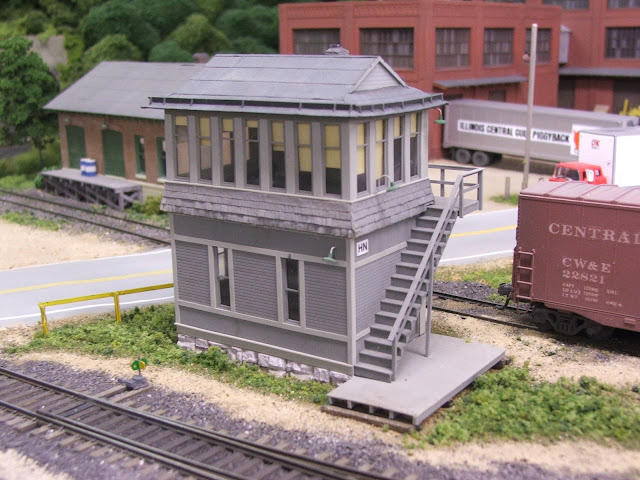 Once the fences were built, they didn't look right. Perhaps they will look better once painted in MOW yellow, I thought. But they didn't. It was too much "stuff" in too little space. Everything looked crowded. And it occurred to me that a fence made out of rail such as this would do little to stop a loaded coal truck. I had also made a bollard out of tube styrene and had painted it MOW yellow. It occurred to me that a couple of these might look much better than the fence. So the fences came out and the bollards went in. Here's a couple of shots of the results. 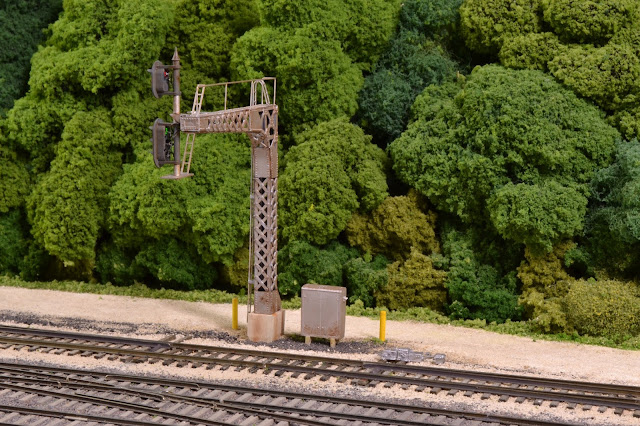 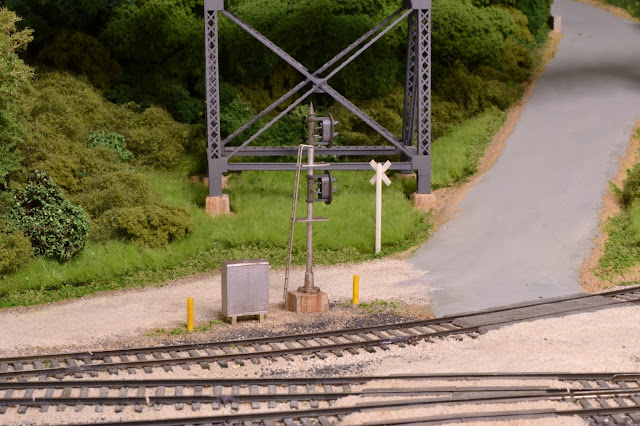 There also needed to be a "fence" of some type between the tracks and the parking lot for the station. I really hadn't given this much thought. One day, I walked past the scene on my way out of the railroad room and it hit me. There's a picture in "Chesapeake and Ohio Railway in Color- Volume 1" by Jeremy F. Plant and William G. McClure III of the station at Gladstone, VA that was taken in July of 1973. It shows a guardrail made out of railroad ties and what appear to be creosoted 2 x 12's. When I first saw this photo, I thought that a similar guardrail would be a neat touch to add near a station. So I had found the inspiration. The photo below shows the results. 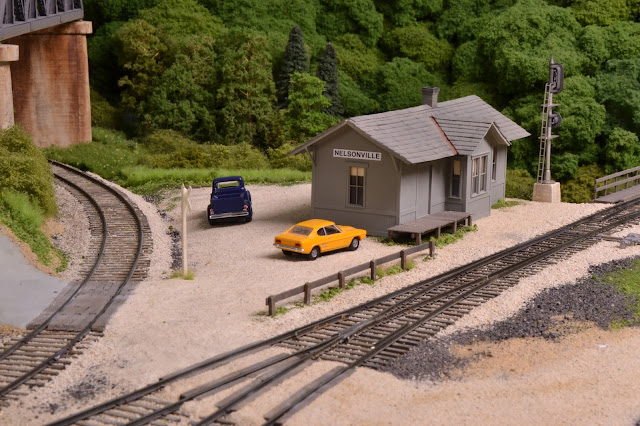 The dwarf signal controlling the eastbound entrance to the main from the yard is now installed and working and can be seen in the photo below. 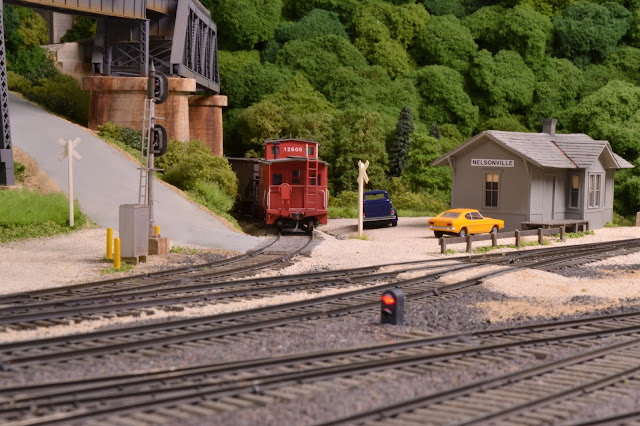 And here's one last shot of the overall scene. 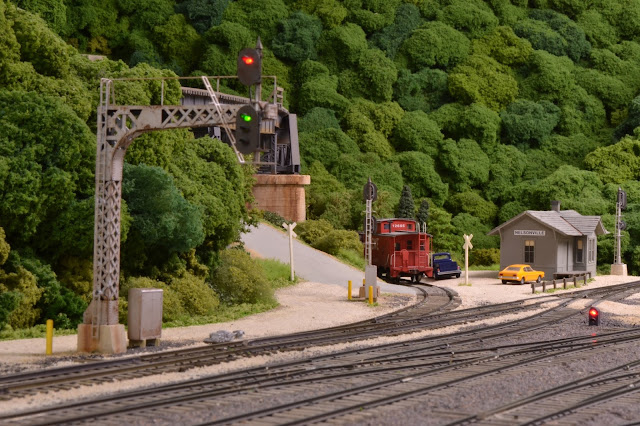 There is still more to do, such as adding the steps to the loading dock at the station, weathering the ballast on the main line, adding a switch stand to the turnout to the siding, etc. And of course, all of the yard track in the foreground in the picture above needs a second layer of ballast along with weathering. But hey, at least there's some progress!

The crossover between the coal yard and the freight yard is complete. The photos below show the results. 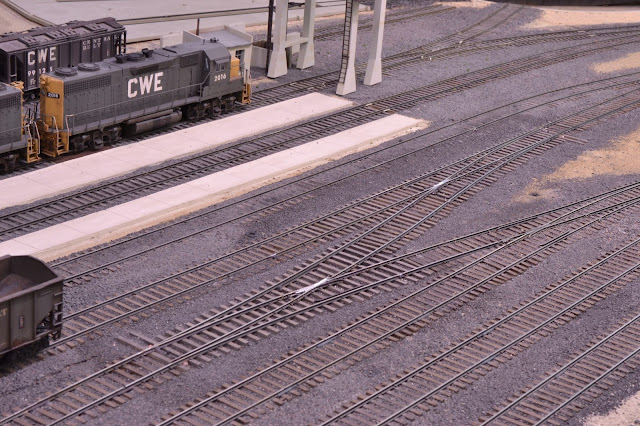 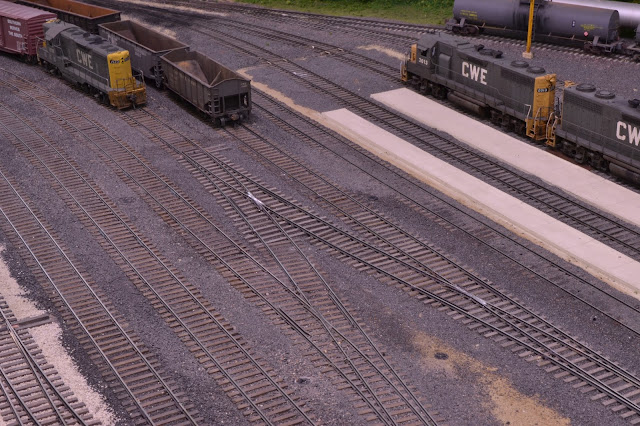 The cut of hopper cars in the photo above is sitting on the lead to the coal yard and the GP7 is sitting on Track 4 in the freight yard. The turnout off the coal yard lead is a #6 left hand and the turnout on the Track 4 in the freight yard is a #6 wye. As noted earlier, this connection will enable the crews to hand off freight and coal between the two yards without having to run out to either end of the main yard.

The true test of this new arrangement will come during the next op session- we'll see what the yard crews have to say about it.