An old Baldwin AS-616 in Chesapeake & Ohio colors has been spotted on the Licking River Terminal Railroad. The LRT is jointly owned by the C&O, L&N, and Kanawha & Lake Erie. Here's a statement from K&LE CEO John Miller:

The Licking River Terminal services Newport Steel as well as a coal to barge transfer on the Licking River and operates the bridge over the Ohio River  to connect with Cincinnati railroads.  LRT is owned by the three railroads which connect with it: L&N, C&O and K&LE.  These roads provide the majority of rolling stock to operate the property although a few items are owned by Newport Steel a subsidiary of Davies Steel.


After some pressure, C&O donated a Baldwin AS-616.


Hearing the news, the C&O Historical Society asked if they could restore the paint to original C&O colors after mechanicals were done. The parties agreed and vowed to operate the unit in these colors until it may become necessary to alter them for upkeep etc.


So here is the freshly delivered Baldwin along with the volunteers who did the restoration.  It is posed outside the LRT engine house in Wilder , KY.


After a few weeks of harsh mill service, I would suspect that the unit will look quite a bit different. 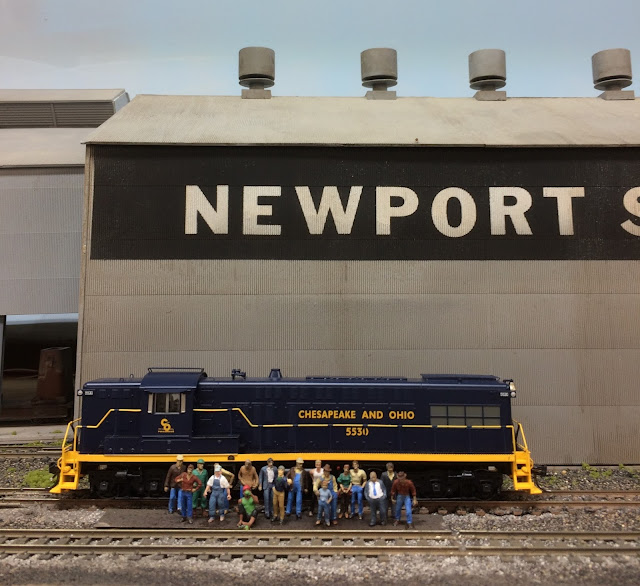 No, not that kind. I'm talking about hardshell surgery. Yesterday, four of the new Exactrail P-S 7315 waffle side boxcars arrived- two decorated for the NW and two undecorated kits that will be painted and lettered for the home road. These cars will make a great addition to the auto parts trains on the railroad. The two NW cars are shown in the picture below. 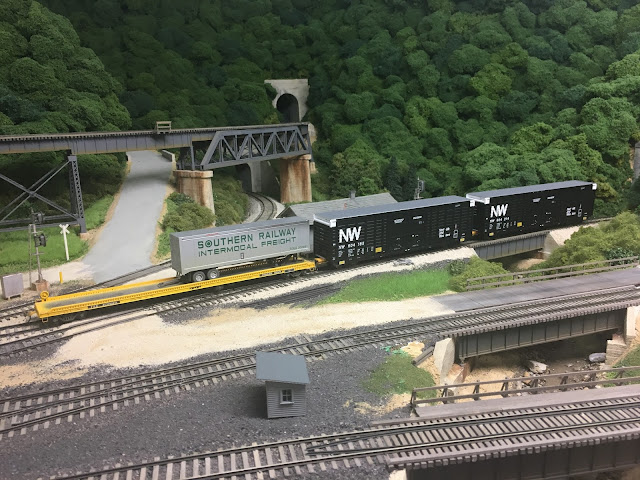 Just after I ordered them, I wondered if they were going to be able to negotiate some of the tight clearances on the layout. There is one tunnel portal in particular that has caused problems with oversized equipment in the past. The intermodal flat in the photo above wouldn't get through it, and I began to think that the new boxcars wouldn't make it either.

Sure enough- the new cars hit the inside of the tunnel roof at the east end of Nelsonville. The portal is on a curve and it wasn't elevated enough to provide clearance for extra height cars when it was first installed. The problem is on the inside of the curve at the back of the portal where the arched roof interferes with any excess height cars. The photo below is looking east along the main line at the portal. 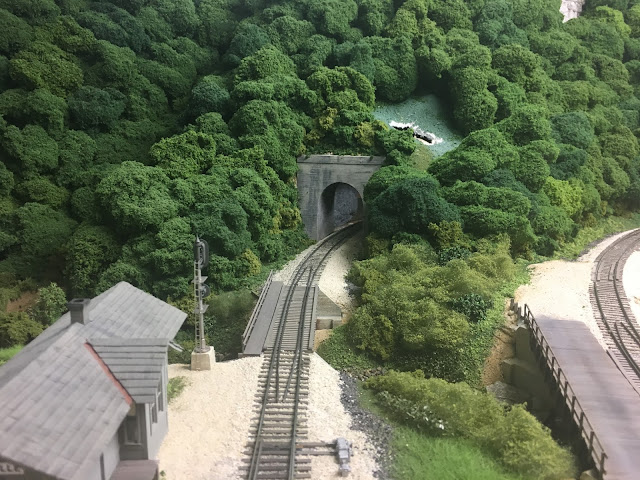 I had looked at ways to modify this in the past, and there just didn't seem to be any good options. Leaning over the layout with a small saw and reaching into an area I couldn't see wasn't going to work. And going in through the large foam panel that is to the right of the portal would require the removal of a large patch of trees and even then wouldn't provide a good angle to get at the back of the tunnel roof.

Then last night it hit me- do a little targeted surgery! The offending corner is just under the hardshell right inside the tunnel. If I removed a couple of trees, I could probably make a small hole that would be large enough to remove the corner of the tunnel liner. The picture below shows the incision, so to speak. 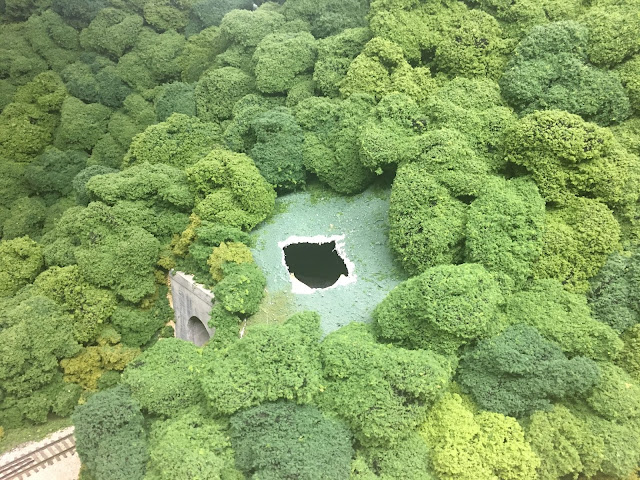 And in the photo below, you can see where the corner of the tunnel roof has been cut back. 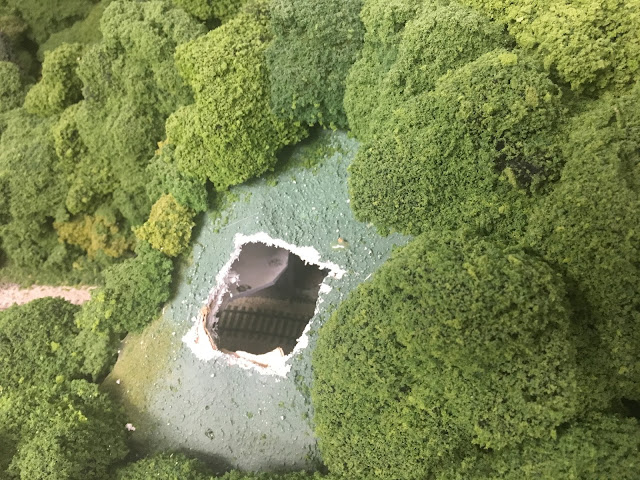 The hole has already been covered with a couple of pieces of plaster cloth and I'll apply a coat of Structo-Lite tomorrow. After a little green paint, I'll reinstall the trees and viola- the new boxcars- and the intermodal flat that wouldn't clear the tunnel liner- will be ready to move freight!
Posted by Tom Patterson at 3:38 PM 4 comments:

Progress continues on the Wheels of Time lumber load that arrived recently. As I assembled the individual bundles, I stacked them on a Proto 2000 flatcar. Once I was satisfied with the appearance of the load I made some notes about how it was stacked. The photo below shows the notes. 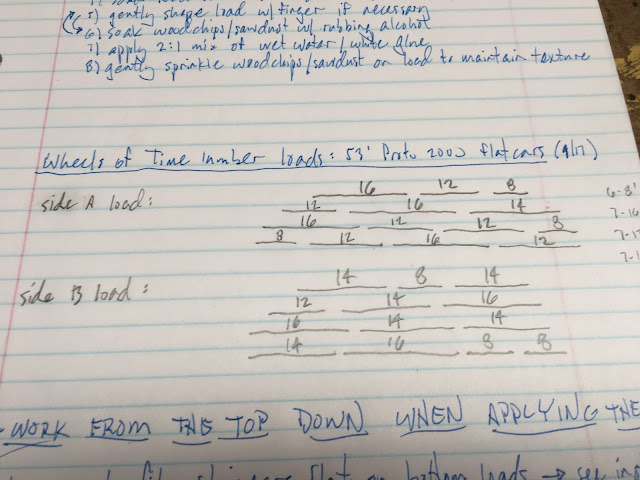 Next, the loads were all washed in preparation for painting. After handling each of the individual loads during assembly, which included filing off the small amount of flash on the ends from the spues, I wanted to remove any dirt and/or oils from my hands. The photo below shows the washed loads. 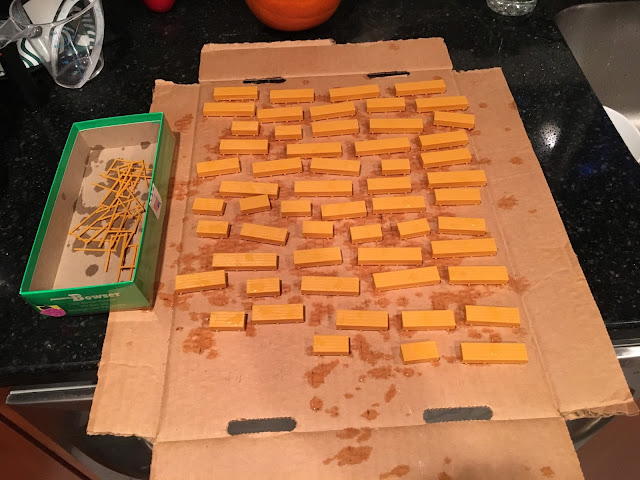 I went to Home Depot to find a rattle can color that I could use to spray the loads. I had originally intended to just spray the bottoms with the can and then use my airbrush for the tops and sides, but the test load turned out so well that I'm going to use the rattle can for the entire project. Here's the paint I found. 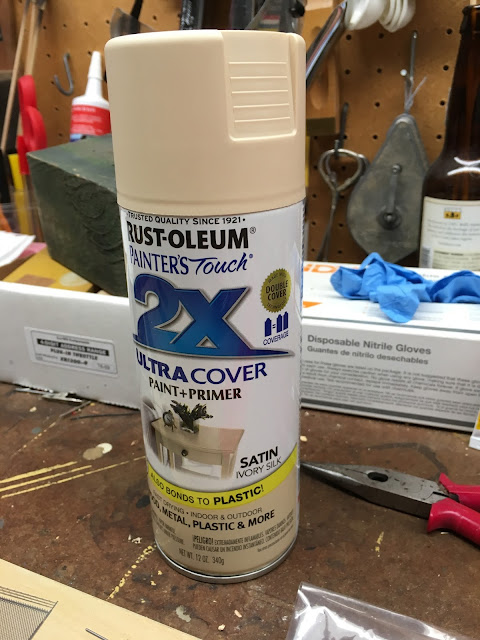 The photo below shows the color on the test load. This paint has a slight sheen to the finish. I'll give everything a coat of Dullcote prior to applying some acrylic washes to add some depth and color variations. Also note that the instructions say the best adhesion to plastic is achieved after allowing the paint to cure for five days. 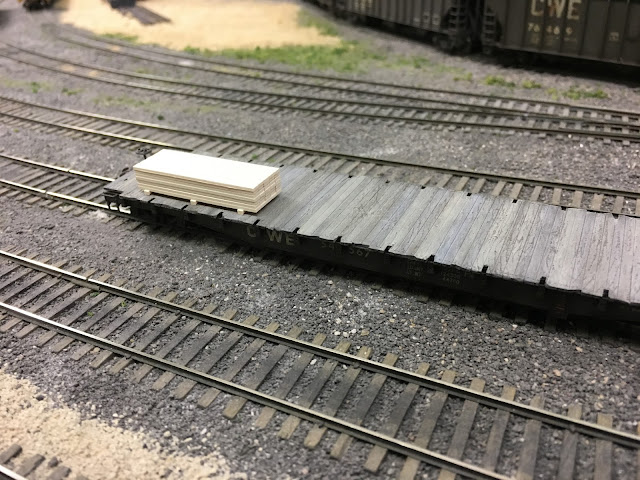 So far, so good. I think the color will work well with some very light weathering. And the detail on the loads is impressive, from the grain on the boards on top to the variations in the ends and sides. More to come on this project.

Another one for the display case.

With the recent completion of two more Northeastern style cabooses, there are finally enough cabooses on the railroad to supply all of the trains and have a few left on the caboose tracks at North Pierce and Nelsonville at any point in time. The new additions have also allowed me to retire the only bay window caboose on the railroad. It's been a long time in coming, and I tried to retire it once before. But the addition of a few new trains caused it to come back into service. Now, finally, it's headed to the display case.

The inspiration for this caboose was the CA-11 kit-bash that Eric Brooman did for the Utah Belt many years ago. An article appeared in the July 1983 Railroad Model Craftsman in which he detailed how he constructed his cabooses using Athearn's Blue Box bay window caboose. I had completed three extensive modifications of Athearn's wide vision caboose by this time and had decided that the most modern cabooses on the railroad would be of the bay window design. And this would fall in line with what the Chessie System had done in the mid-1970's.

I started by removing all of the cast-on detail from the shell. Next, I salvaged windows from a few of the wide vision shells and inserted them in the bay window shell. I wanted a unique design and changing the windows, in the same fashion as I had done on the wide vision cabooses, seemed like the ticket. Most of the original windows were filled with scraps of styrene and sanded smooth. Unfortunately, I didn't spend as much time with the Squadron Green putty as I should have and you can see some of the joints. 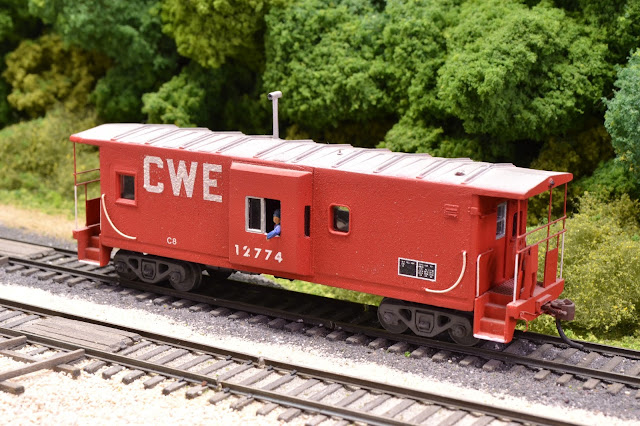 I fashioned new end railings out of brass wire and pieces of plastic and added wire grab irons all around. Additional details were added to bring the car up to the standards of the other cabooses. 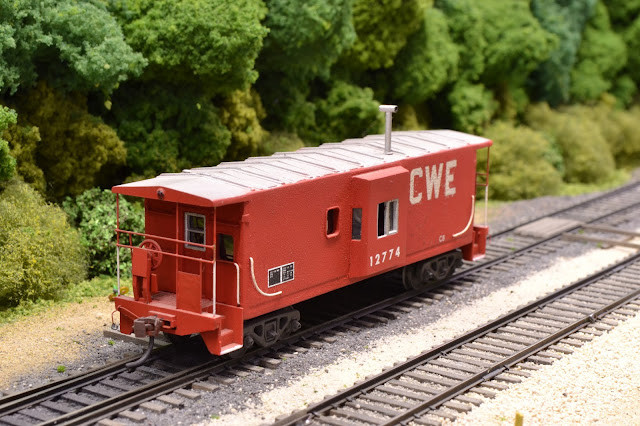 Alas, this car was completed at a time when I was really struggling to get a good gloss surface with my airbrush. As a result, the decals are a mess. The numbers didn't turn out too bad because they are dry transfers.

I never really warmed up to the overall design of this caboose, and given the decal job, I'm happy to be relegating it to the display case. Who knows- there may yet be a modern bay-window caboose on the roster as I still like the concept. But for now, I'm waiting for the inspiration to come around like it did the last time.