So I have come to the realization that I have too many projects in the works. Over the last two years or so, I have started almost ten different freight car/locomotive projects that have languished in various states of completion. Sure, there were other projects that got my attention such as the dispatcher's panel. But now it's time to push these through to completion, and I've promised myself that I won't start another freight car until these are done.

At the risk of revealing just how lax I've been, I'll try to list these in order (provided I can remember that far back!). The photo below shows the oldest project which is a P2K GP7. I've built four or five of these over the last handful of years and I had some momentum going after completing the last one. I got as far as rebuilding the chassis and installing a decoder before I lost interest. All of the details have been added to the body and it's now in the paint shop. Next up will be UP Armor Yellow and then on to decals. 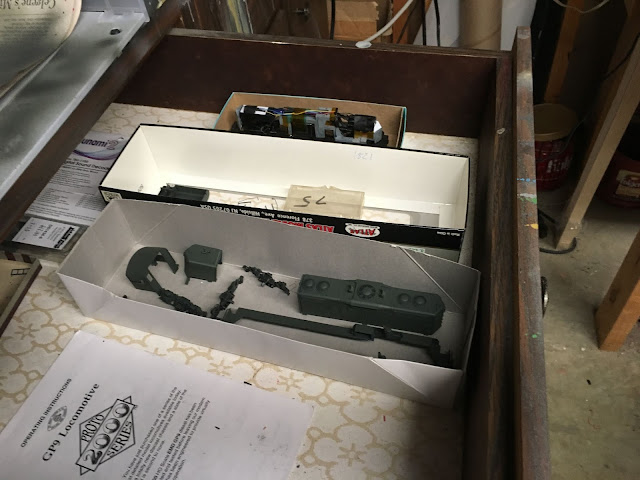 Two years ago I purchased an Accurail covered hopper at the local NMRA fall meet. I had intended to make this a paint out and re-letter it for Greg McComas' proto-freelanced Michigan Interstate Railroad. Greg had kindly sent me the decals along with the number series for this car. The back story was that the MCIS got this car when it took over ex-PC lines in Michigan at the formation of Conrail. The build date on the car is 4-74 and it struck me that Conrail probably wouldn't have given up a car this new. So I decided to keep it as a PC car even though I didn't like the shade of green and I couldn't find a photo of a car in this number series with this paint scheme. After weathering the car, I still didn't like it. Then it occurred to me- repaint it into a K&LE car! I checked my decal stash and I have enough to do a covered hopper car. So into the the 91% bath of isopropyl alcohol the car went. As if to add insult to injury with this #@!$ thing, the paint wouldn't come off. At least the weathering did. So here it is ready for stirrup steps and a trip to the paint shop. 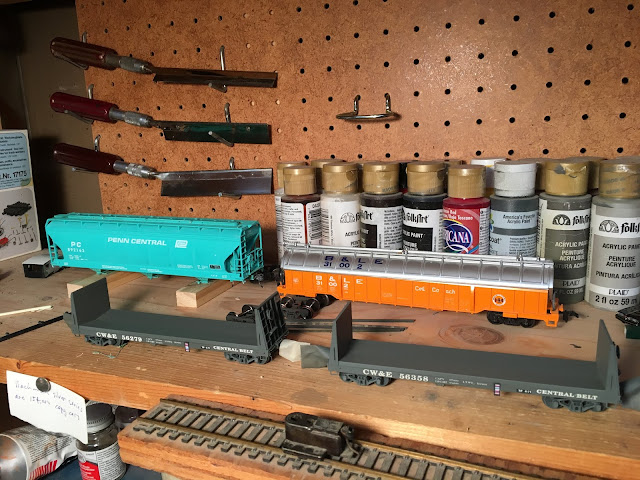 And note those Tichy pulpwood flats in the foreground. I started those back in March of 2017 and ran into numerous stumbling blocks. I had originally planned to scratch-build loads for them with twigs that would have surrounded block weights. Great idea, but after I figured out how many twigs I would have to cut, the kits went back on the shelf. I finally decided to fill the under frames with lead shot and if that didn't provide enough weight, I'd scrap them. Fortunately, with the addition of metal wheels, I think they'll track OK. More to come on these two.

Next up are three kit-bashes that have been in the works for some time. The first is a Bowser two-bay covered hopper car. I removed all of the  cast on grab irons on the ladders and replaced them with .010 styrene rod. This was the third of three cars that were to be painted for use in sand service on the home road. The other two made it onto the railroad but this one got left behind. It will be painted soon and placed in service. Behind the covered hopper car are two kit-bashed pulpwood cars made from old Athearn Blue Box gons. The C&O Historical Society magazine had an article on gons that were converted to pulpwood flats and I thought that would make a great kit-bashing project. I had one of the old Athearn cars and I picked up another at the NMRA flea market. I purchased some Tichy pulpwood flat ends to add to them and started on the project. Then I got stuck on how to cut the sides down. Back on the shelf they went. I finally figured this out and got them finished. They are now awaiting paint. More on these cars later, too. 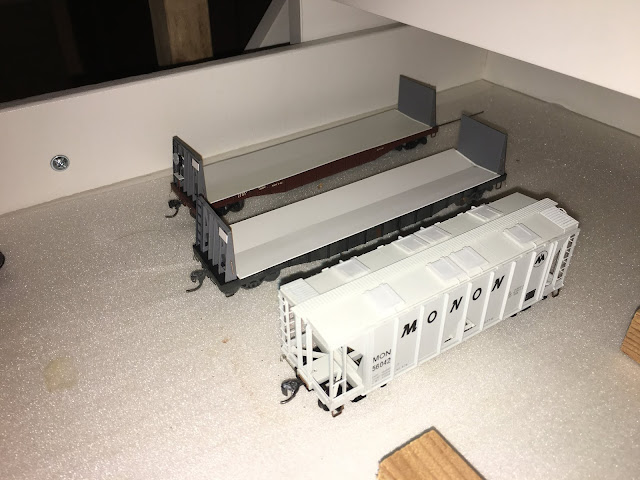 That's it for now. Stay tuned- there are more to come!

Over the last year or so, I've been building a bunch of freight cars. While some of them are now on the railroad, a significant number remain in the paint shop in various stages of completion. And some of these have been in the works for some time, such as FPS 82756.

Those of you who read the blog on a regular basis will be familiar with the Forest Park Southern. It's the proto-freelanced railroad of Bill "Smokey" Doll and it has appeared in both Model Railroader and a segment of TrainmastersTV. It's a beautiful railroad set in the late 1950's in Virgina and West Virginia. And as you might expect, the FPS interchanges with a number of the other railroads in the Cincinnati area, including the CWE.

The story of FPS 82756 begins with another good friend, John Miller. He has painted and lettered almost as many FPS freight cars as Bill, with one exception: all of John's cars are set in the mid-1970's era which is the time frame of his Kanawha & Lake Erie Railroad. It was John who came up with the mid-1960's auto parts boxcar scheme that you see on FPS 82756. John was kind enough to give me some of the decals for the car, and what you see below is the result. 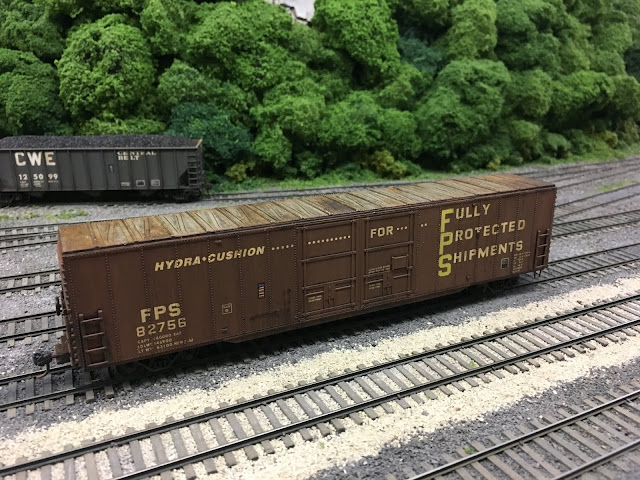 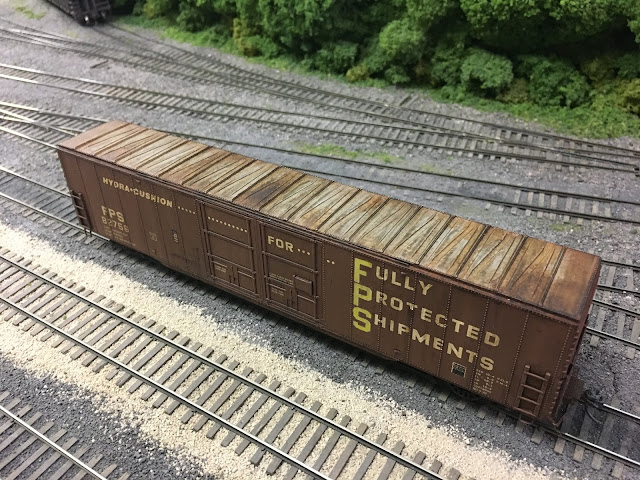 The car is one of the old Robins Rails 60' Greenville cars that was produced back in the mid-1980's. The kit was subsequently produced by A-Line for a period of time. While it lacks the detail and fidelity to scale of more modern cars, it's a fairly good representation of the Greenville car and a neat kit. I changed the truck spacing, added some additional details, and then painted and weathered the car with artist's acrylics and powders. The big FPS letters in the logo are white decals that were colored with a highlighter to get the yellow tint. However, the yellow washed out during the weathering process so I went back and hit the letters with a watercolor pencil. It was one of those ideas that came out of nowhere as I was finishing the car. I'm glad it did, because the yellow letters are one of the key features of John's neat scheme.