Well, 2016 is rapidly coming to an end. I haven't posted nearly as often this past year as I had originally intended. Perhaps that will change next year. In any event, here's an update on what's currently under way on the railroad.

First up is GP9 1824. This is a Proto 2000 shell on an Athearn Genesis chassis with a factory installed Tsunami. This Genesis loco was one of the early GP9 runs that had the wrong window height and errors in the height of the doors on the long hood. Good friend Anthony Hardy alerted me to a sale in which these locos were going for $135 which isn't a whole lot more than the cost of the decoder. The detail on the underframe, fuel tanks and trucks is outstanding. All I had to do was cut out the coupler pockets on the frame and mount them on the body. 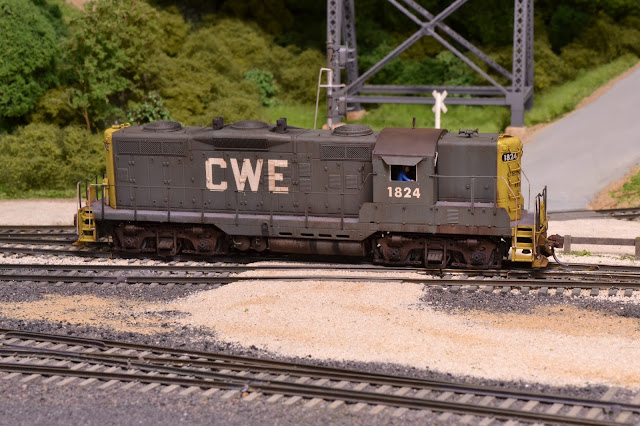 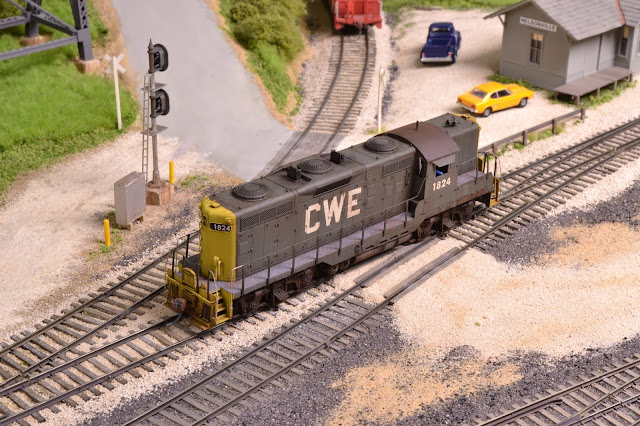 The chassis was just finished on another GP9 while the body is in the paint shop. The CWE locomotive roster included a large number of GP9s which were part of the original dieselization of the railroad. Until the completion of 1824, there was only one on the railroad. In addition to this next one, there is another currently in the works. 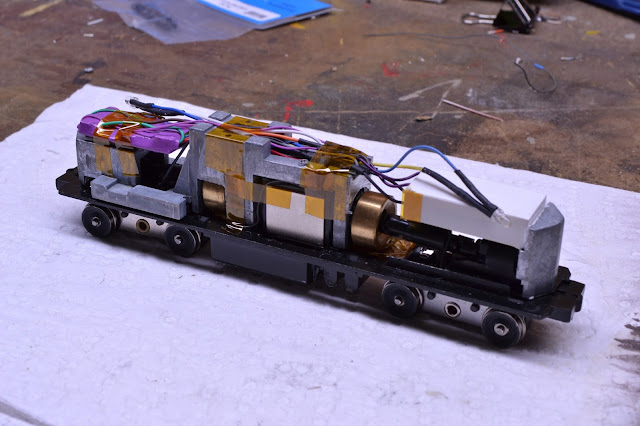 Two more panels have been converted to pushbutton control since the last post. 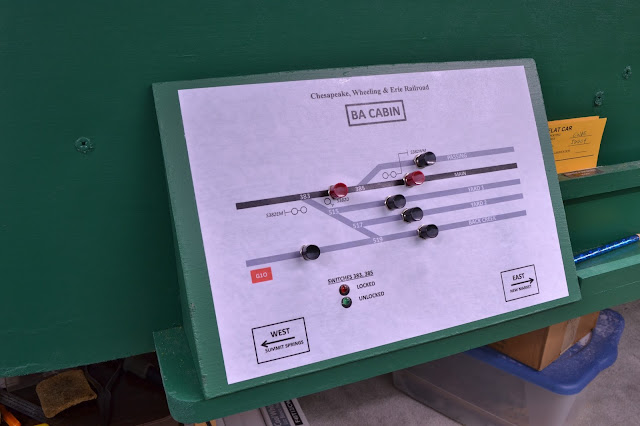 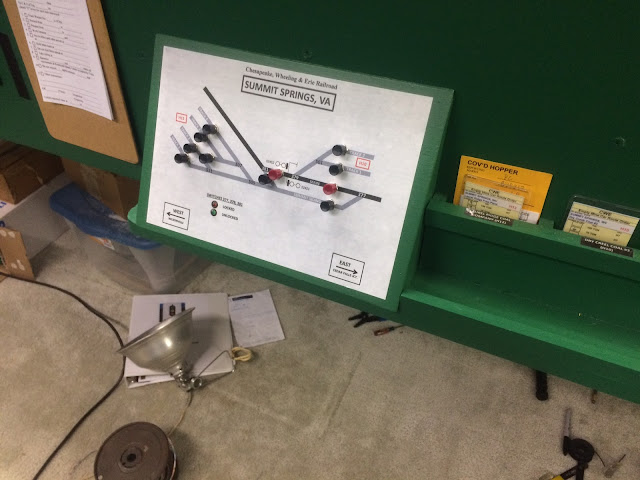 Next up is the panel at Nelsonville. This project will take a little longer to complete as the panel will have two signal repeaters- one for the signal off the Dry Creek Branch and the other for the westbound main signal. Neither of these can be seen from the aisle.

The ballast in the east end of Nelsonville has been finished. Some additional weathering around the switches and the installation of switch stands will wrap up the scenery here. I won't finish the track closest to the fascia until the structures are built for this area. The old coach serving as a yard office will be replaced with a structure similar to the yard office at Elk Run on the C&O. There will be several track worker shanties and a RIP shed here as well. 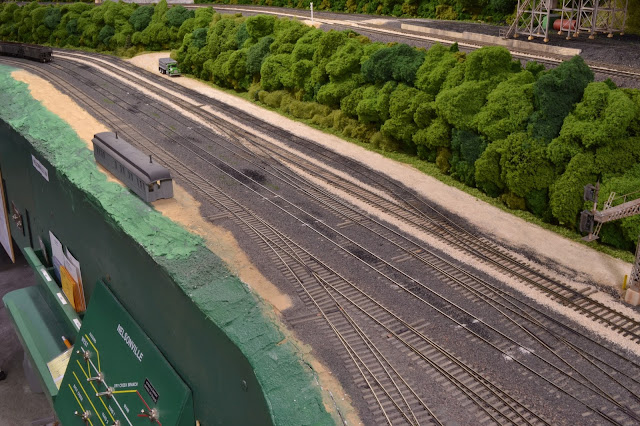 The paint shop is full of cars awaiting some weathering. Included in this group is a special car from the Suffolk Northern. More to come on that project. 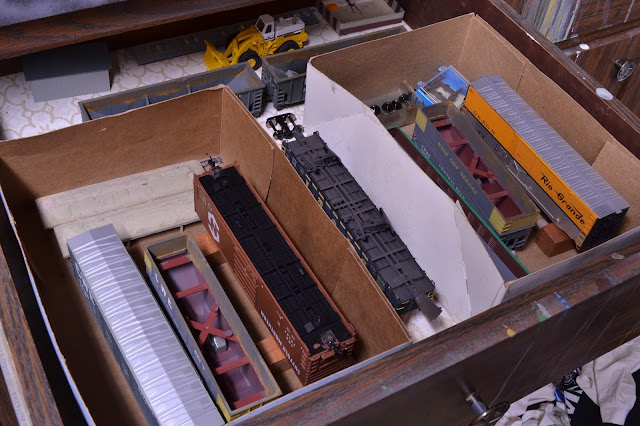 And last up is a PRR X58 boxcar that was just added to the roster. This is one of the new Tangent cars and, in the spirit of the season, it's "a beaut." 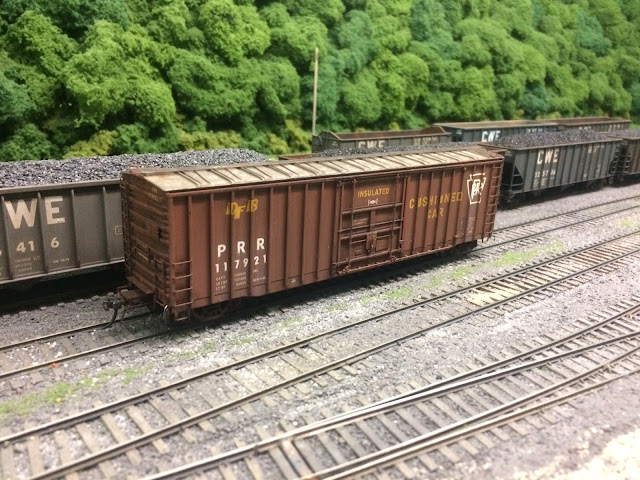 Here's wishing you a very Merry Christmas and a great 2017!

Another One Bites the Dust

Actually, another two bite the dust. Two panels, that is. Progress continues on replacing all of the older panels with toggles controlling turnouts with new panels that feature route selection pushbuttons. The most recent converts are the panels at SJ Cabin and Logan. The photos below show the new panels. 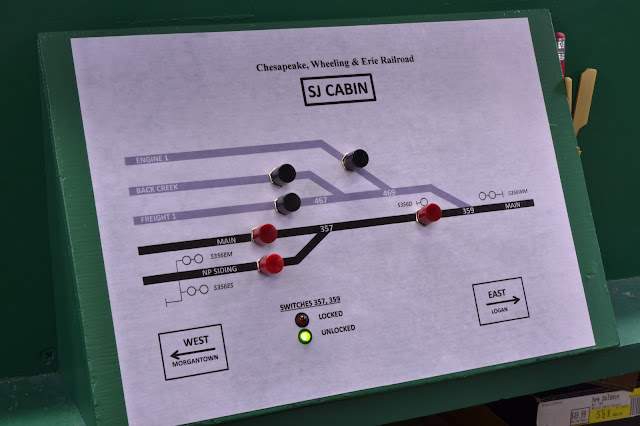 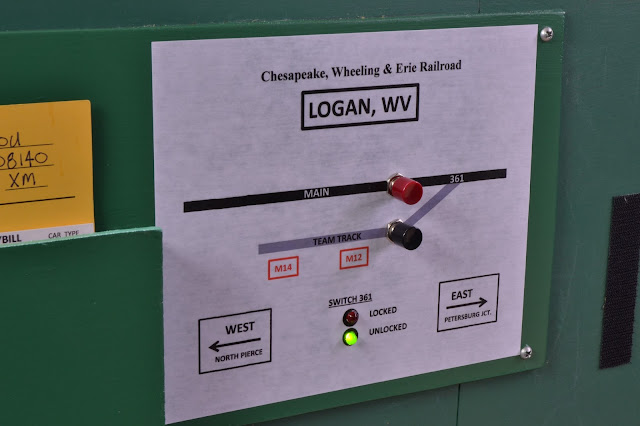 In addition to the new panels, changes were made to the panel at Big Chimney. The picture below shows the first iteration of the panel. 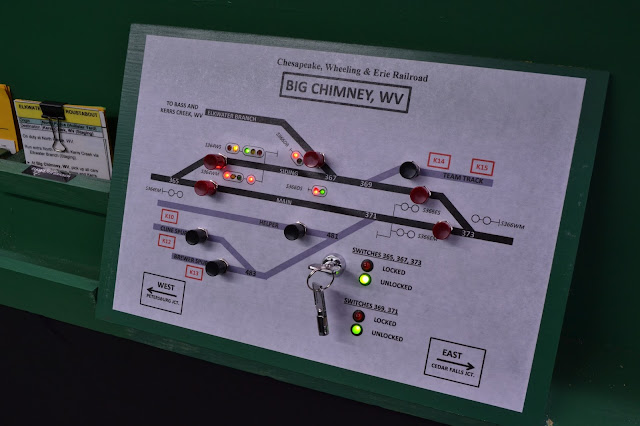 While staging the railroad for an upcoming session, I realized that the route selection here wasn't working as originally intended. For example, pressing the pushbutton for the mainline at Switch 373 also aligned Switch 371 for the main. If you had a cut of cars stretching out onto the main from the Helper track and you had just come off the siding at the east end, lining the route up for the main would throw the switch under the cut. Also, pressing the pushbutton for the siding at Switch 373 normalized both Switch 369 and Switch 367. Again, if there was a cut of cars coming of the branch onto the siding and you lined Switch 373 for the siding, Switch 367 would be thrown under the cut of cars. 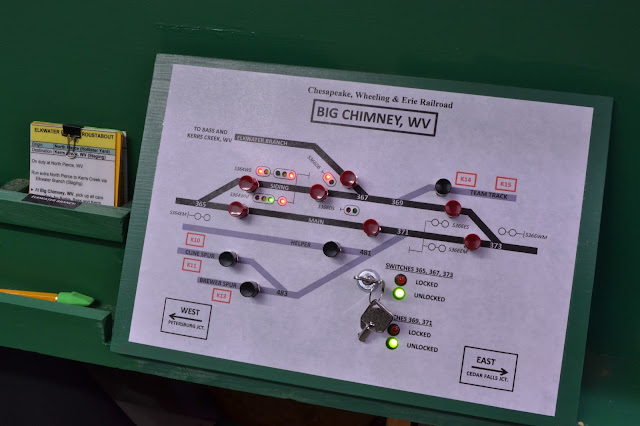 Part of the beauty of the Signals By Spreadsheet product is the ease with which changes like this can be made. Simply add a couple of pushbuttons, print up a new panel label, hook up the pushbuttons to the RCS card and reconfigure the card.

Next up, I'm going to head back east to the panels at Summit Springs and BA cabin. The panels for the yard at North Pierce are going to be quite a bit of work and I'm planning to save those for last. Getting all of the panels completed on the line east of the yard will also allow me to start on CTC. And that's been the objective of all of this from the start.

Posted by Tom Patterson at 3:20 PM No comments: