I originally purchased this Atlas double plug door boxcar a number of years ago when I was looking for a specific car to provide hardwood to the Weber Furniture plant at North Pierce, WV. I found this kit at a local hobby shop and purchased it on the spot. Most of the rolling stock on my layout is based upon a photos I have seen that shows cars as they appeared in the mid- 1970's. In this case, the reporting marks indicated the car was built in 1974 so I relied upon Atlas to have accurately depicted the paint scheme for this particular boxcar. I intended this car to look fairly new, so I painted the trucks and underframe Floquil Grimy Black, added the consolidated stencil and ACI label and scratch-built the cut lever. Finally, I weathered the entire car with a light dusting of Floquil Grime on the sides and a special mix of weathered brown on the ends and coupler boxes. The photo below shows the car as it appeared at this time. 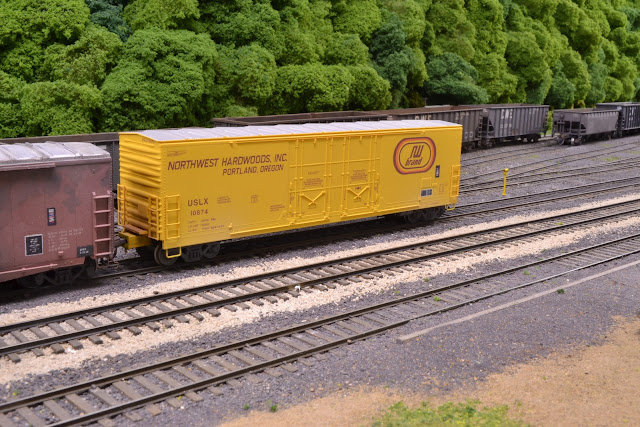 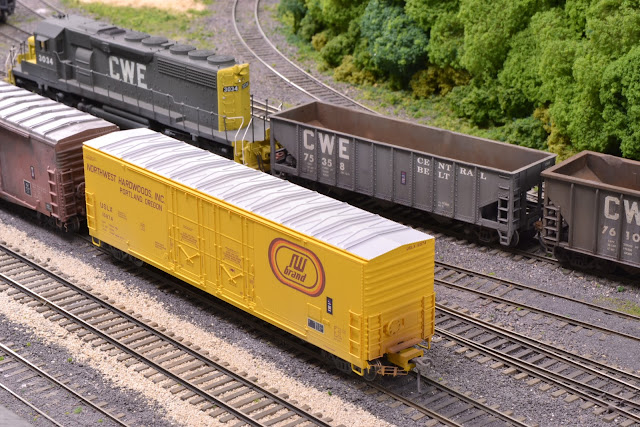 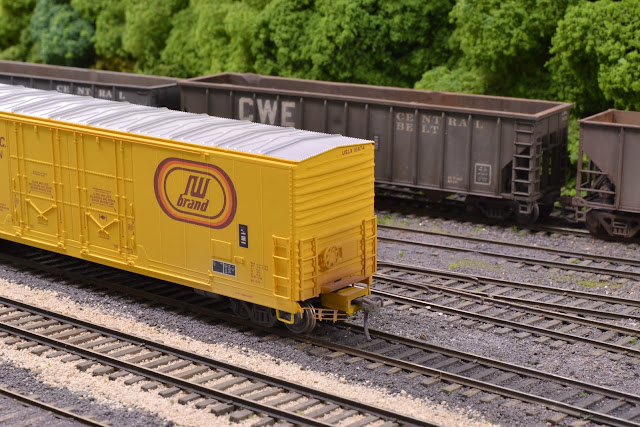 As with many of my modeling projects, the inspiration for this one came out of nowhere. I had never been completely satisfied with the appearance of this car, and I couldn't quite figure out why.  Walking past the car as it sat in the yard at Nelsonville one afternoon, it struck me- all of the detail was washed out. On top of the light color of the car, the overspray of Grime had effectively erased the fine detail on the car doors and elsewhere. As I picked the car up to observe it more closely, one of the trucks fell off. That was it- off to the shop for screws for the trucks and a new paint job.


Before beginning work on the car, I searched the web in hopes of finding a photo of a similar car. I found what I was looking for at the Railcar Photos website- here's a link to the photo: http://www.railcarphotos.com/PhotoDetails.php?PhotoID=47289. This photo was taken by Craig Walker in 1980 which is a few years after the 1976 time period I'm modeling. Also, the car in the photo has the Evans-USRE ends while the model has the Evans ends. However, the paint scheme is very accurate so I chose to ignore the incorrect end panels.


The first step was to remove the other truck and drill the holes in the bolsters with a number 50 drill. I make it a practice to attach all trucks and couplers with screws, but in this case I had made an exception and relied upon the plastic pin that came with the kit. I have no idea how the pin came loose, but it doesn't matter. The point is to not violate the basic rules you have established for trouble-free operation- or pay later. After drilling the truck bolsters, I tapped a hole for a 3/16” #2-56 screw in each. I also sent the trucks to the paint shop to receive a coat of custom mix weathered brown that will serve as the base for additional weathering. I then sprayed the sides, ends and roof with Dullcoat to serve as a base for the weathering.


I have started using acrylic washes based upon the information and techniques that I’ve found on a number of model railroad sites, and I’ve been very pleased with the results. For this car, I mixed a bit of burnt umber gouache and ivory black gouache with Microsol to make a wash. Prior to applying the wash, I made a template out of styrene to cover the herald on the right side of the car. I then cut out a piece of masking tape using the template and covered the herald. I wanted to see if I could get the yellow on the car sides a little darker than the yellow in the herald, as can be seen in the photo. I applied the wash to one of the sides and then began removing it after rinsing the brush with Microsol. My goal was to leave just enough of the wash behind to settle into the creases in the detail and leave a slight coating of grime in other areas on the car. To my surprise, the Dullcoat started coming off in small globs and a bit of the Floquil Grime was removed too. Fortunately, I got lucky- the wash left behind just enough grime to highlight the details and removed enough of the Floquil Grime to get the car closer to its original colors. I checked a notebook that I keep with comments on various painting projects and found a note stating that Dullcoat should be allowed to dry for at least a week before using the Microsol washes. Otherwise, the Microsol tends to either craze the Dullcoat or remove it. This project was right on the cusp of the one-week timeframe, so I changed the note to read two weeks for the drying time. The photo below shows the boxcar after the first wash was applied. 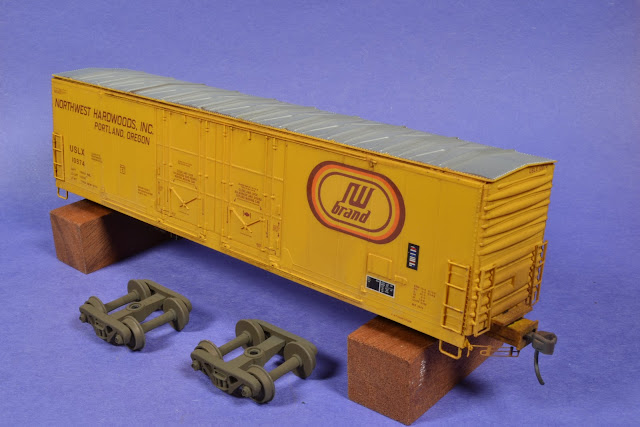 After the sides had dried, I went back over the coupler boxes and stirrup steps to with a slightly thicker wash of the burnt umber and ivory black gouache. I also added a little raw umber gouache to the couplers and coupler pockets. The photo below shows the results. 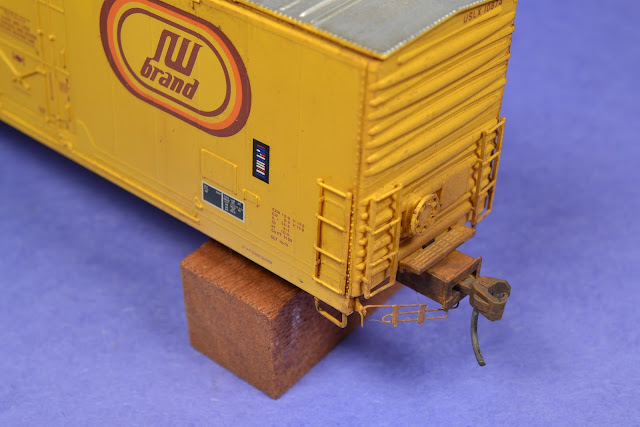 Once the sides and ends were finished, I applied a light wash of ivory black gouache and Microsol to the roof. My goal was to highlight the ribs on the roof and add just a bit of grime. After this dried, I dipped a small brush into the ivory black wash, removed most of the paint and then lightly stippled areas of the roof to represent the very beginnings of rust. The photo below shows the completed roof. 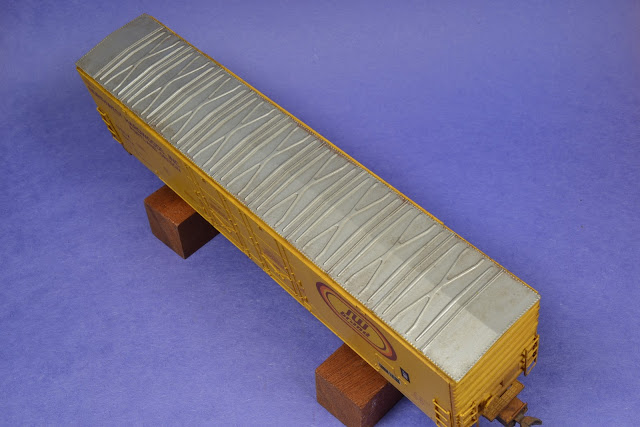 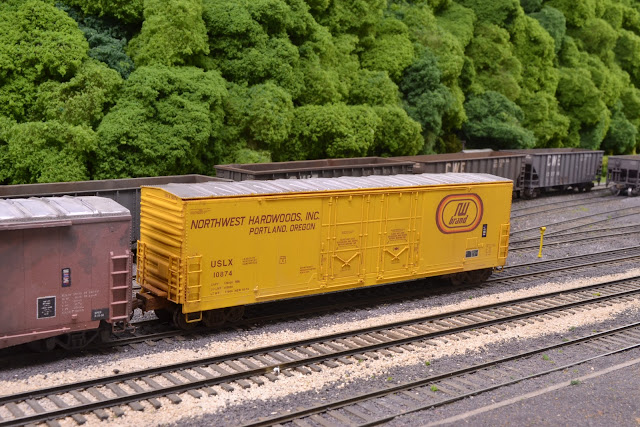 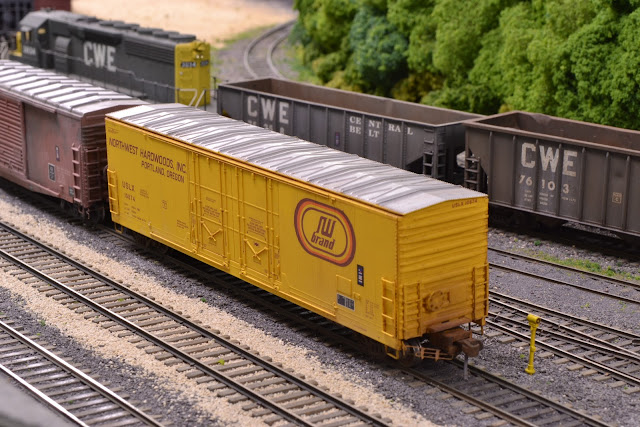 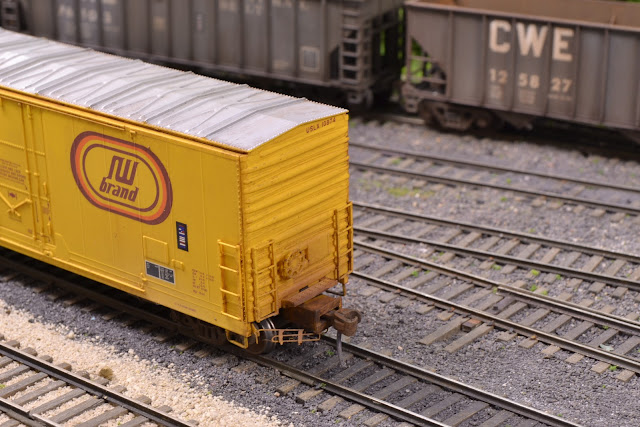 The addition of the wash to the sides really helps the details "pop" and the subtle effects of the weathering help make the car look like a closer representation of the prototype.
Posted by Tom Patterson at 2:01 PM