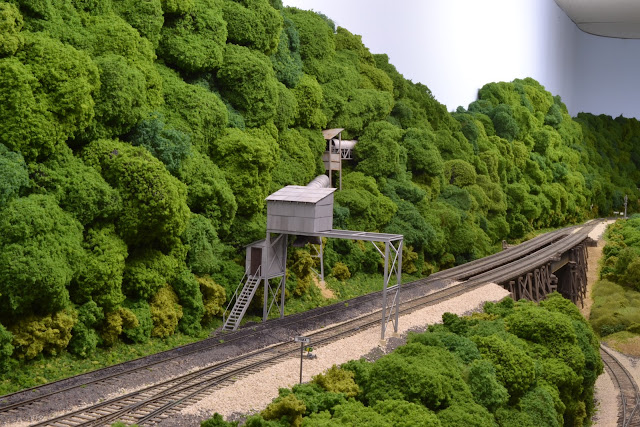 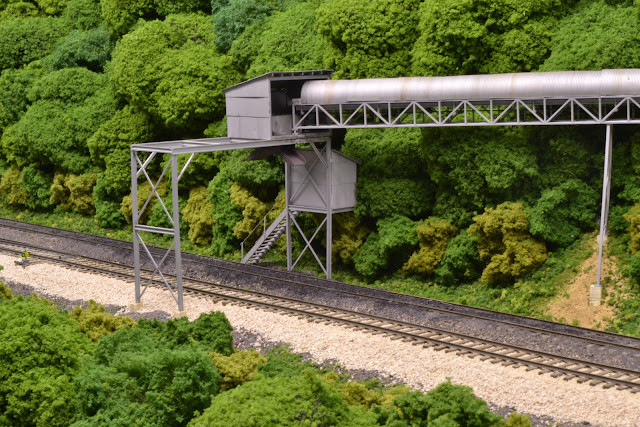 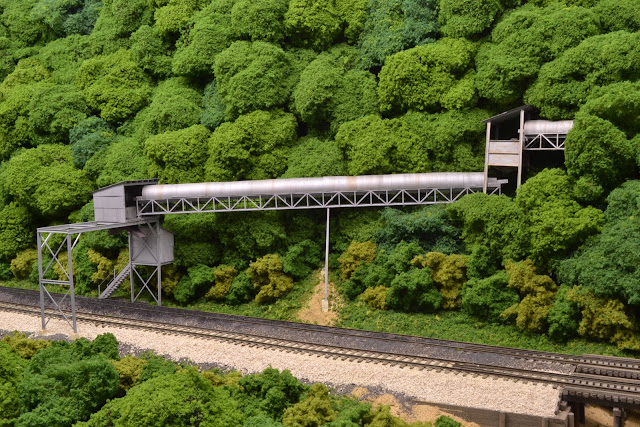 
At the end of the Sand Fork Branch is the McHenry Coal Company tipple. This facility is also fed by a system of conveyors that run up the side of the mountain and loads 9-10 cars per day. 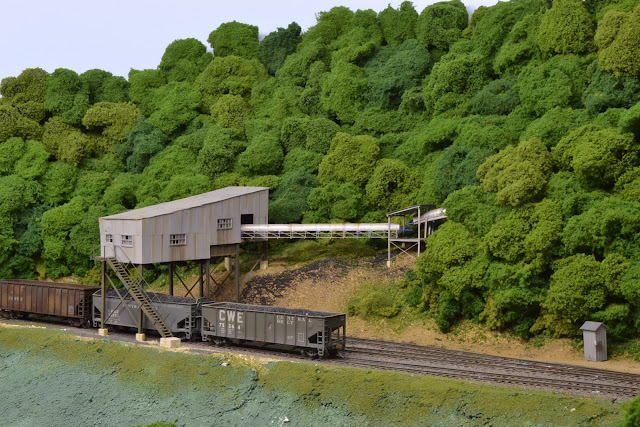 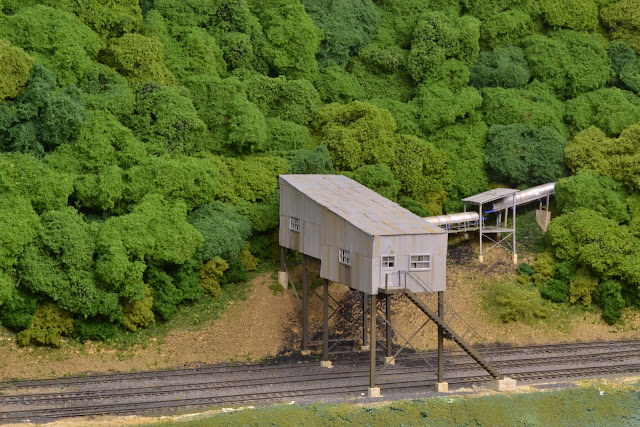 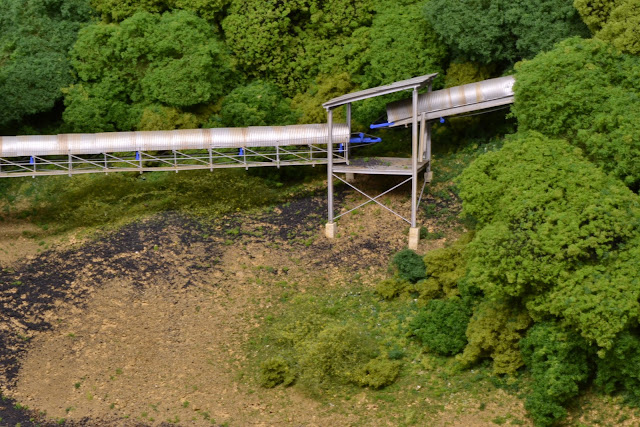 This structure was scratch-built using plans of a tipple in Adena, Ohio on the old NKP that appeared in the July 1980 issue of Railroad Model Craftsman. The basic frame of the structure was made using Plastruct i-beams and then Campbell Scale Models corrugated siding was added. The conveyor was scratch-built using styrene strips and shapes, .020 brass wire and a Detail Associates etched metal roof walk for the walk way. The design of the conveyor is based upon the beautiful model of the Open Fork One tipple on the Clinchfield’s Nora Spur that Don Cassler built many years ago. When I built this back in the late 1980’s, the only reference photos I had were several pictures of Don’s model that appeared in MR and RMC along with a photo from MR’s series on the Clinchfield. Also, note the mailbox on the side of the railroad phone both that used for waybills supplied by the mine. The area around the tipple will have additional details added, including a power pole and transformer, along with additional layers of coal dust and cinders.
Leaving the Sand Fork Branch, we head up the Main Line to Summit Springs where several coal loading facilities are located. The first is Dry Creek Coal #2 which is located just past the long trestle at the end of Summit Springs tunnel. This facility is fed via conveyor and loads 6-7 cars per day. 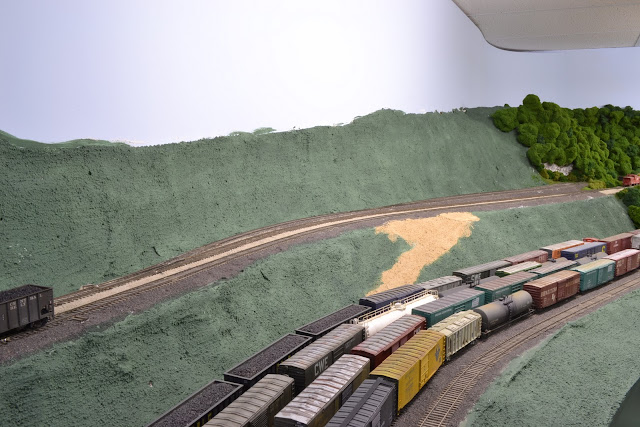 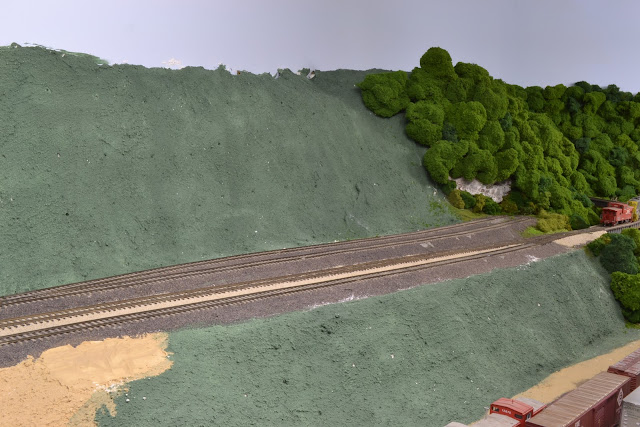 This facility will be scratch-built and will be based upon Clinchfield Coal’s Jacob Fork tipple.


On the other side of the main from the Dry Creek Coal tipple is a short branch that leads to the large preparation plant at Summit Springs. Laurel Ridge Coal Company’s Tipple #5 generates 15-17 cars per day and is the largest facility on the layout. Coal is delivered via conveyor from mine entrance further up the mountain. 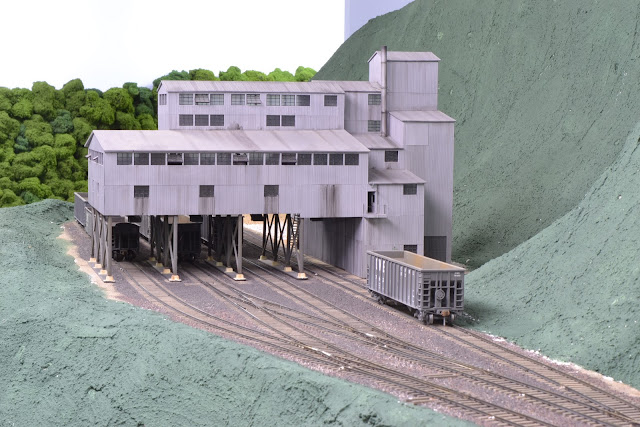 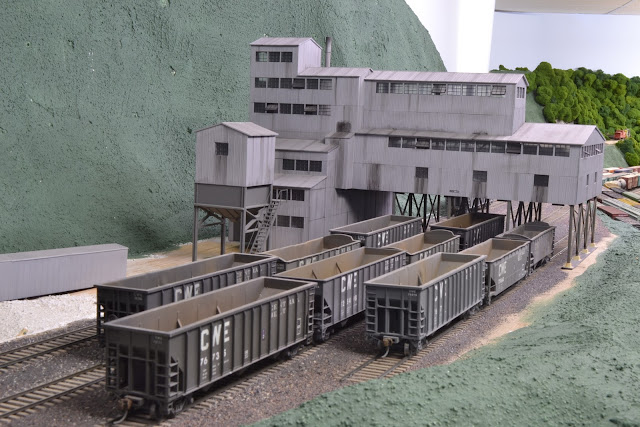 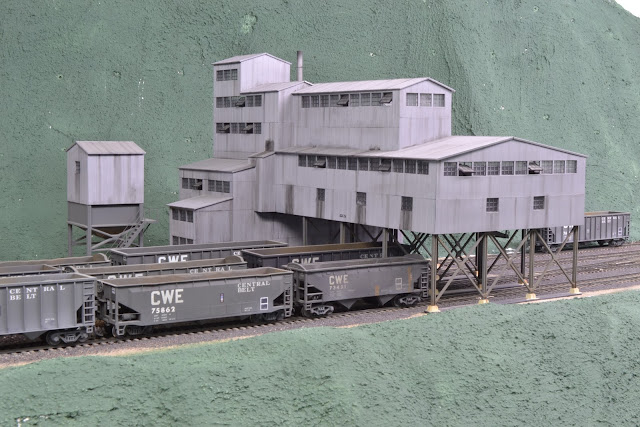 This structure was kit-bashed using two of the Walthers New River Mine kits. The design is based upon the Traux-Traer Coal Company’s Raccoon mine that was located at Kayford, West Virginia on the C&O’s Cabin Creek branch. I only had views of one side of the structure to work with, so the side facing the end of the tracks was “imagineered” using photos of similar facilities. There will eventually be an office, a tank for the oil that was sprayed on the coal loads and several other small support structures around the tipple.


After leaving Summit Springs we head down the other side of the mountain to the small yard at Nelsonville. There are several branches that connect to the main here and this small yard is used primarily to assemble coal trains from the loads that come off the branches and to make up the locals that deliver empty hopper cars to the mines.  The Wilson Bridge Branch leaves the main line here at Nelsonville and there is a small load-out just past the lead to the yard. This facility will be fed via a truck dump and will load 6-7 cars per day. 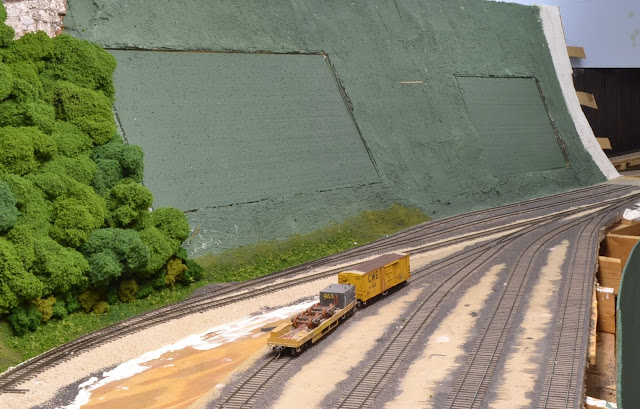 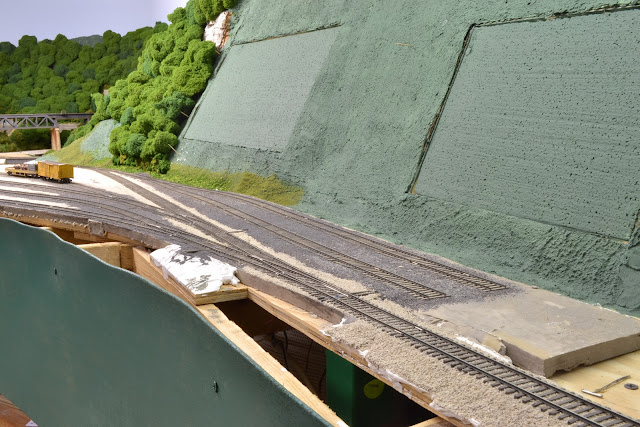 This structure will be based upon the Dixie Mining Company’s truck dump that was located on the C&O at Pikeville, Kentucky. Several photos of this facility appear in Tony Koester’s book “The Model Railroader’s Guide to Coal Railroading” which I highly recommend to anyone interested in modeling a coal hauling railroad.


I hope you have enjoyed the tour of the tipples, truck dumps and prep plants on the modeled portion of the Chesapeake, Wheeling and Erie. I plan to share the construction of some of the tipples and load-outs here in the future, so stay tuned.
Posted by Tom Patterson at 7:40 AM

Email ThisBlogThis!Share to TwitterShare to FacebookShare to Pinterest
Labels: Structures