The railroad's locomotive shops have been busy. The most recent addition to the roster is SD9 1752. This is a Proto 2000 unit that was decorated as a BNSF repaint of a Burlington Northern unit. It was on sale at Walthers and had a Tsunami in it so I figured I couldn't go wrong even though it would need some modifications. The footboards had been cut off the bottom of the pilots and notches were cut in the top corners to accept the newer style cut levers. As it clearly represented a unit that had been updated at some point, I was going to paint it in the modern CWE scheme (F4). But after retiring SD9 1763, there were no locos on the railroad in the earlier paint scheme (F3). So I decided that this unit would carry the colors that were last applied to diesels in early 1967.

This project turned out to be more work than I had originally anticipated. The rotary beacon on the cab rood had to be removed and the hole filled. I cracked one of the number boards trying to get it out of the body and it had to be repaired. Then there was the frame. If the unit was going to be painted in the F3 scheme of the early 1960's, it probably wouldn't have had the footboards removed and the newer style uncoupling levers. So I dug through my spare parts boxes until I found a frame from an older unit. Fortunately, the shell fit onto the frame without any problems. Next, I wanted to add spark arrestors that were applied to all of the first generation EMDs. Of course, the BNSF winterization hatch interfered with them, so I had to dig through my parts box to find a replacement. Once all of the changes were complete, it was off to the paint shop. I tried fading the Pullman Green with oils by mixing up a dirty grey color. It didn't turn out as I had hoped although it did a fairly good job of fading the paint. I went back over it with another wash of burnt umber and ivory black oil paint which toned down the grey wash. The final results can bee seen in the photos.

The unit was been renumbered post 1968, so the numbers on the cab side received less weathering than the rest of the unit. 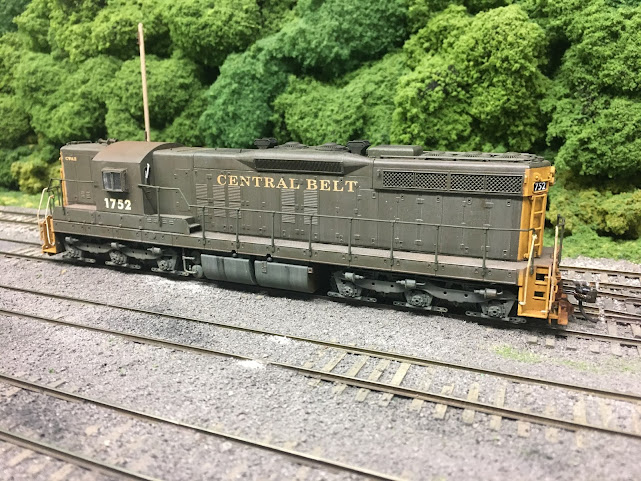 The unit will be assigned to either the ballast train or switcher duty at Nelsonville or North Pierce. While the weathering didn't turn out exactly as I had hoped, it's good to have a unit on the railroad in the pre-1967 F3 paint scheme.