In January of 1947, the Mechanical Department of the Chesapeake, Wheeling & Erie Railroad placed its first order for diesel locomotives. For a railroad that depended upon the shipment of coal for its livelihood, indeed its very survival, this was a difficult decision. But recent reports from other lines of the incredible performance of diesel locomotives versus their steam counterparts made the decision inevitable. Management owed it to the stockholders to at least evaluate the potential of these new machines.

In mid-1947, the first six of a total order of ten EMD NW2s arrived on the property. These units were assigned to the large coal loading facilities at Hunters Bay, VA and were used primary to shuttle coal between the massive coal storage yard and the loading wharves. This job had been handled by the railroads venerable Class S 0-8-0 switchers that were purchased from Alco in the mid-1930's. These locomotives were showing their age and the increase in post-war coal movements required additional power to handle the tonnage.

Impressed with the performance of this first group of locomotives, the railroad ordered a handful of additional switchers from its long time steam locomotive partner, American Locomotive Company. The first two Alco S2s arrived in June of 1948 and were assigned to the coal operation at Hunters Bay along with the NW2s. The S2s were painted in the same scheme as the NW2s but with the road number below the yellow cab instead of above it. 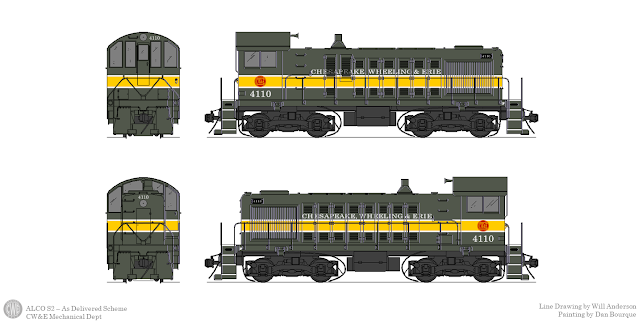 By the end of the month, another three S2s joined the ten NW2s already at work keeping the coal moving at Hunters Bay. And the writing was on the wall- there would be no turning back. Dieselization of the railroad was inevitable. The first handful 0-8-0s were sent to Richmond to be scrapped in August of 1949.

Posted by Tom Patterson at 8:41 PM