For the past six months or so, Bob Fallowfield has been going back over his fleet of cars with an eye toward updating and/or redoing the weathering on them. I've been following his progress on his Galt Sub of the CP Facebook page. Bob models the late 1970's- early 1980's so a lot of his freight cars are of interest to me. He does some really beautiful work, and I've learned a few new tricks from him. But what I've really taken away from watching his progress is the desire to go back and do the same thing with my fleet. The first to go through the program is C&O 619112.

This is one of the Walthers RTR cars that came out in the mid-1980's. I removed all of the cast on grab irons and replaced them with Details Associates wire grabs, replaced the stirrup steps with A-Line parts, and replaced the roofwalk with an etched metal one. It was a lot of work. Once the new parts were on, I masked off the rest of the car and sprayed over the ends and the ends of the sides with Scalecoat II (I think- it was a long time ago!). I painted the trucks a rust brown color and then weathered the car with a light dusting of Floquil Grime. The weathering was based upon a color photo that appeared in Rail Model Journal back in the day. Satisfied with the results, it went on the railroad.

At some point in the not-too-distant past, I came across a photo of one of these cars and noticed that the bottom was blue. Sigh. A quick check of other cars in this series showed that all of the bottoms were painted Chessie Dark Blue, as were almost all of the covered hoppers painted in the Chessie scheme. So I grabbed the old car, looked at the bottom, and realized it would be a chore to mask it off and repaint it. So it sat a while longer.

A few weeks ago, it occurred to me that I could brush paint the bottom. It certainly didn't have to be perfect. I could just mix up a blue that closely resembled the Chessie paint and have at it. I could also redo the weathering which I had never really been satisfied with. The photo below shows the results of the paint job. 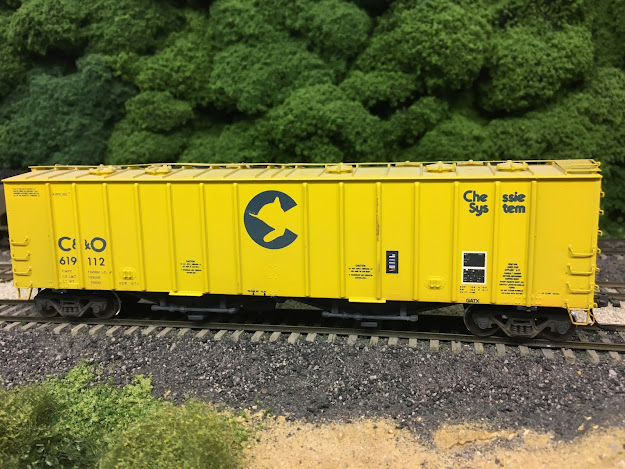 When new, the trucks on these cars were painted the same blue color as the bottom. I thought I could capture this look with some artist's oil dabbed on with a cosmetic sponge. It wasn't a one shot fix as I had hoped. I ended up going back over the trucks with a wash of artist's acrylic burnt umber and then finished it off with Pan Pastel highlight.

The final step was to add some wheel splatter to the ends and touch up the coupler pockets. The results can be seen below. 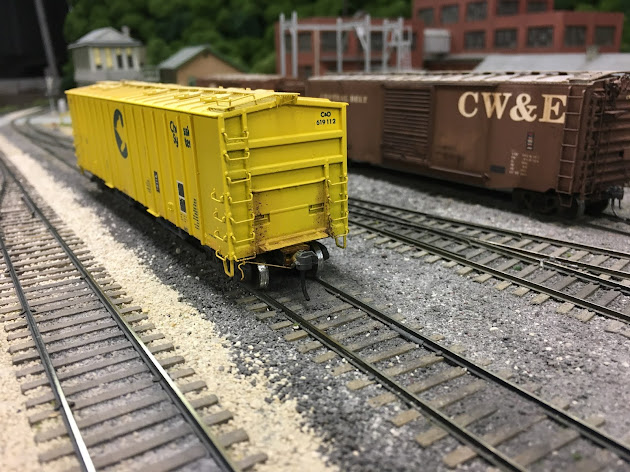 It's nice to finally have this car looking more like the prototype. Given all the time and effort I had put into it back in the day, I really didn't want to abandon it. Will the crews notice the improvement? Unlikely. But at least I won't be inclined to turn my head away every time I see it!

Posted by Tom Patterson at 7:49 AM