As mentioned in a previous post, I hit a wall with the porch railing on one of the two company houses that I'm building and they both went back into the box. See this post for the details: http://cwerailroad.blogspot.com/2017/03/inspiration-part-1.html. A week or so later, I walked back into the railroad room and looked at the porch railings on several company houses that I had previously built- see the photo below. 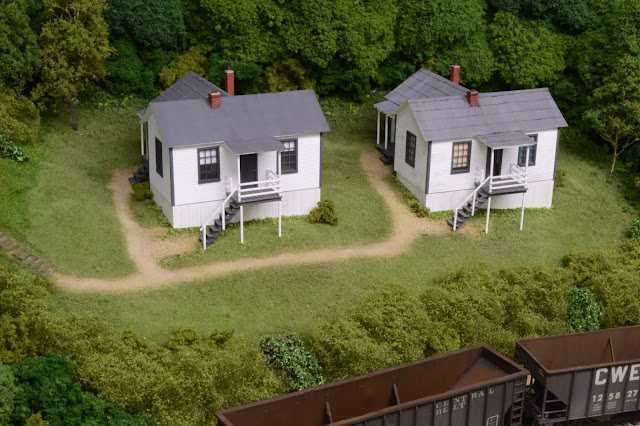 There was the inspiration! A quick check of Tony Koester's book on modeling coal railroads confirmed that the same type of railing was used on a house similar to the white one I'm modeling. And the photo contained the detail I needed for my railing.

Armed with a new plan, I headed back to the workshop. The railing for the green house appears to made out of 2' x 4's in between 4' x 4' posts for the porch railing. I began by cutting the 4' x 4' posts to size. Next, I cut the vertical pieces of 2' x 4' using a scale rule and attached two of them to the 4' x 4' posts, making sure to leave enough room at the bottom for the 2' x 4' piece that would span the 4' x 4' posts. So far, so good. Then I glued the vertical 2' x 4's to the bottom 2' x '4 at intervals between the posts. It quickly became evident that, despite my careful measuring, the vertical 2' x 4's were slightly different lengths. Placing the top piece of railing over them really showed how off they were. Sigh. The whole mess went into the garbage can.

It took me a couple of days to come up with a new plan. I have always been a big fan of jigs when scratch-building structures, and it seemed a jig of some sort might be the answer for my problems with these railings. But the real key was figuring out how to get multiple pieces cut to the exact length. While I have several different versions of  Northwest Shortline's Chopper, these small pieces of styrene are just too fine for that tool. So I cut a number of pieces of 2' x 4' slightly longer than the required measurement, placed them next to one another on a piece of glass, and then butted them up to a straight edge. Using a scale rule to determine the correct length, I cut them all at once. Bingo! A bunch of vertical 2' x 4's that were all exactly the same length- see the photo below. 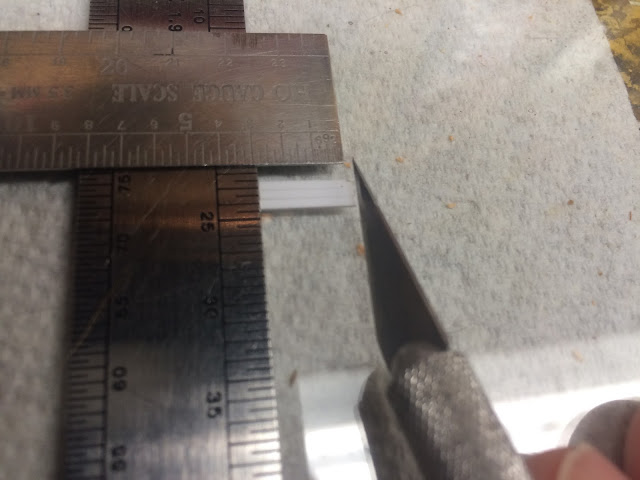 Next, I taped a straight edge to the piece of glass that I was working with in order to hold the railing pieces in place while I assembled them. The photo below shows how I added the horizontal pieces to the side railings for the white house. With the front portion next to the side section, I could make sure that the two ends would match up on the 4 x 4 post. 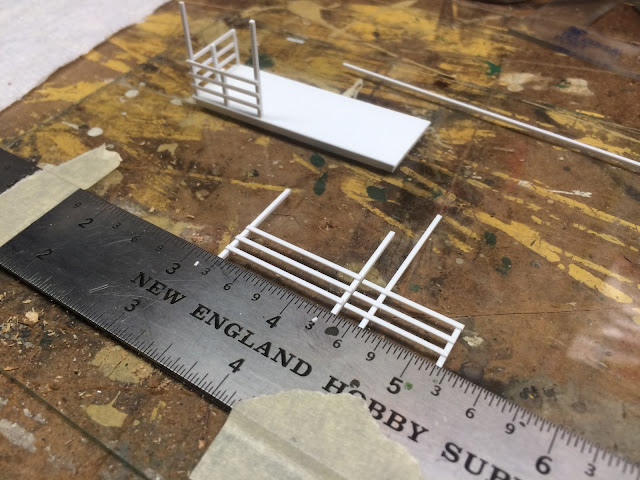 The photo below shows the completed porches ready for painting. Once the base colors have been applied, I'll come back and weather them before attaching them to the structures. 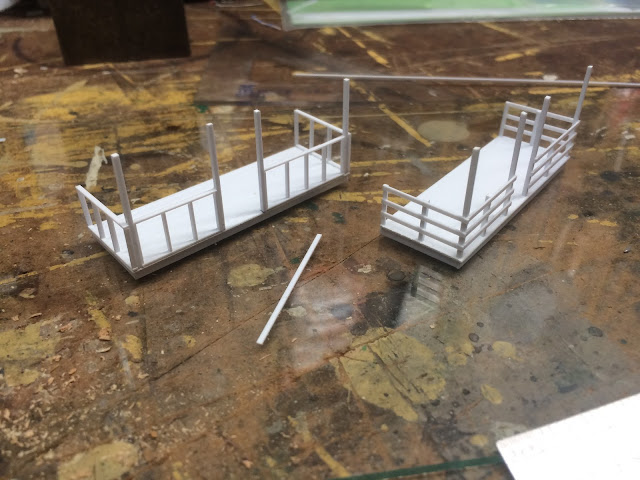 Now it's on to the roofs.

Posted by Tom Patterson at 9:02 PM